PARIS — Serena Williams was knocked out of the French Open in the fourth round on Sunday by Elena Rybakina, the No. 21 seed from Kazakhstan.

The match was a duel between generations. Williams is 39 and has been playing at Roland Garros since the 1990s. Rybakina is 21 and playing in the French Open for only the third time, but her big, flat serve and powerful baseline game were the difference in her 6-3, 7-5 victory.

Williams struggled with consistency and reading and responding to Rybakina’s groundstrokes, particularly her versatile forehand.

“It was definitely close,” Williams said. “I’m so close. There is literally a point here, a point there that could change the whole course of the match. I’m not winning those points.”

It was the latest setback in Williams’s long-running quest to win her 24th Grand Slam singles title and tie Margaret Court’s career record. But her failure to triumph in Paris was no great surprise in light of her recent results on clay. She lost two of three matches on the surface before arriving at Roland Garros.

“I’m in a much better place than when I got here,” she said. “It had been a really difficult season for me on the clay, and although I love the clay, I was like, ‘If I could just win a match.’”

She won three, defeating Irina-Camelia Begu, Mihaela Buzarnescu and Danielle Collins, all unseeded, before running into Rybakina, who was born and raised in Moscow but now represents Kazakhstan.

Rybakina’s only significant wobble came when she served with a 4-3 lead in the second set and lost the game with a series of unforced errors. But she recovered from that shaky moment, going on to break Williams’s serve at love at 5-5 and then closing out the most significant victory of her career with a strong service game.

“Of course, I was nervous, and even in the last game I was not serving as well as before,” Rybakina said in her on-court interview. “But I’m just so happy I managed with my thoughts and everything and I won today.”

Rybakina’s victory guarantees there will be a first-time women’s Grand Slam singles finalist at this French Open. The quarterfinals in the bottom half of the draw will match Rybakina against Anastasia Pavlyuchenkova of Russia and Tamara Zidansek of Slovenia against Paula Badosa of Spain.

None are ranked in the top 20, and none have advanced to even the semifinals of a Grand Slam tournament in singles. Pavlyuchenkova, 29, is the most experienced and has a long connection with France, having trained near Paris in her youth at the Mouratoglou Tennis Academy. She defeated the former No. 1 Victoria Azarenka, 5-7, 6-3, 6-2, on Sunday after defeating third-seeded Aryna Sabalenka in the third round. 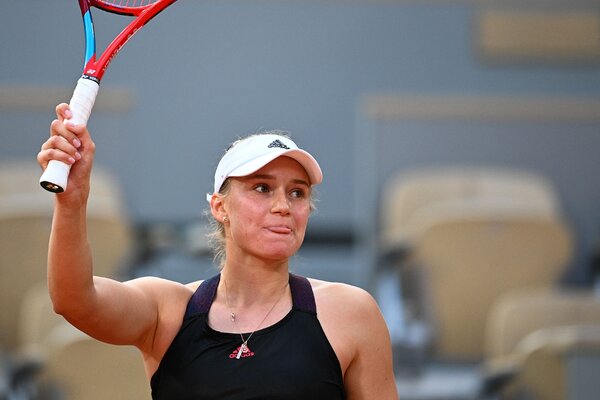