NSW Swifts ace Paige Hadley wants Sarah Klau's selection in Australia's World Cup squad to be the catalyst for her teammate to finally realise what others have known for some time: that the unassuming 24-year-old can become the best goal keeper in the game.

“I just hope that with this selection – and the confidence it’ll give her – Sarah realises she really is world class,” said Hadley, whose brilliant Super Netball form ensured her selection in the Diamonds squad that will be out to defend their title next month.

“For Sarah – who probably didn’t think [her World Cup selection] was possible – it’s well-deserved [recognition] because she works so hard. I’m so proud of her. We’re going to be in England and we’ll be singing the national anthem arm in arm. It doesn’t get better than that.” 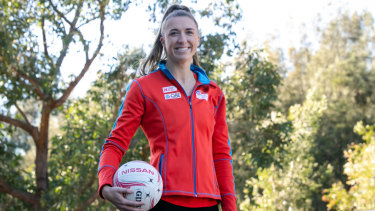 Klau, who is the only member of the Caitlin Bassett-captained squad that doesn’t have an international cap, revealed she had worked on fostering greater self-belief and confidence in the lead-up to this season.

“I’ve always struggled with it,” she said about confidence. “I’ve worked on it though. The turning point was a coaches meeting [I attended] at the start of the year and it was mentioned I lacked self-belief.

“That conversation made me think to myself I could actually do this by putting everything forward … doing everything I possibly can. I realised that even if I did fall short I’d at least know I put everything out there for everyone to see.

“I don’t know why [confidence doesn’t come naturally]. Perhaps it’s human nature to automatically feed the negative stuff. Although, I have switched those thoughts around. In previous years, if something didn’t work out, I would’ve dwelt on it, thinking, ‘I should’ve done this’ or ‘damn it, I did that’. I focus instead these days on positive self-talk and my capability.” 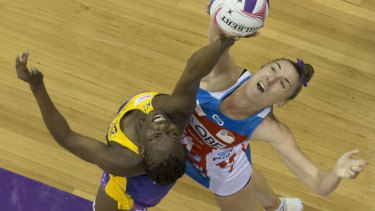 Up for the battle: Sarah Klau and Peace Proscovia fight for possession in round four.Credit:AAP

Klau, who was raised in rural South Australia before attending boarding school in Adelaide at Immanuel College, has numerous achievements to be proud of. Besides her netballing feats, she also plays the violin, piano and flute, while she’s in the middle of completing her masters in occupational therapy.

True to her reputation as netball’s quiet achiever, Klau preferred to acknowledge the many people who have given her staunch support through the years, rather than bang her own drum.

“It filters down from the top,” she said of her Diamonds selection. “I have to thank the coaches for that and also the girls around me. I guess I just needed a bit of reassurance and I’m really happy with how it feels. I keep getting goosebumps.

“I’m representing so many people: my previous coaches, South Australia – I’m the only athlete [in the squad] from South Australia … hopefully I’m doing them proud. Immanuel College gave me an amazing scholarship and, without their support, I wouldn’t be here …”

As Klau and the Swifts – who have made a stunning start to the season – prepared for Sunday’s match against Collingwood, she revealed that, like confidence, she’d also learnt to embrace the harsh realities of her on-court role.

“It’s always going to be tough and there’s going to be plenty of balls during a match that go over your head,” Klau said of being a goal keeper. “But the couple you can get your hand on could make the difference to the game.

“You need to be persistent – and resilient – [as a goalkeeper] because without those attributes you’ll fall into a hole.”