EARTH can Strike in the opener. Having won like a nice prospect on debut here last month, Joseph O’Brien’s EARTH STRIKE should take all the beating in this Listed contest. 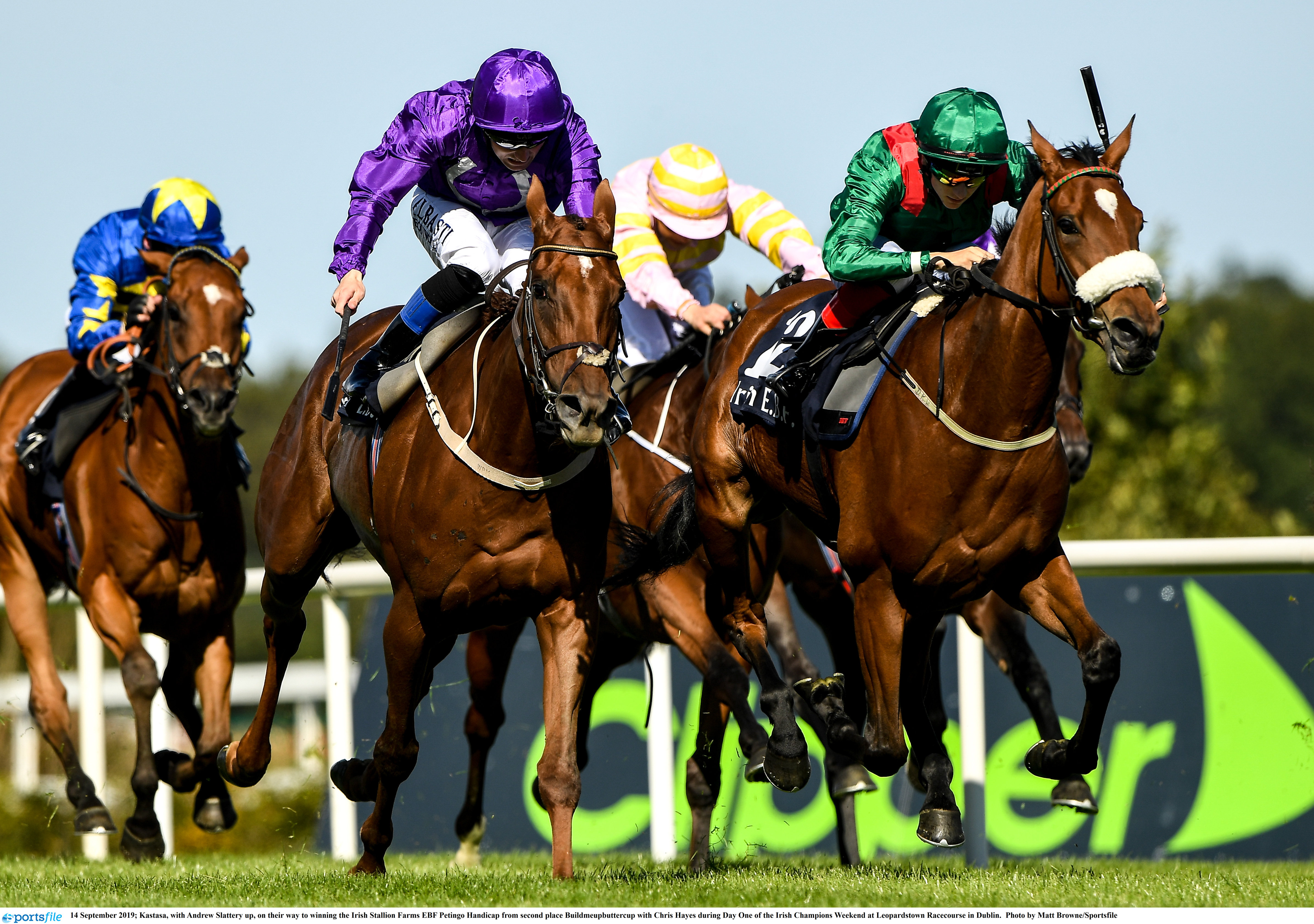 She bumped into a decent stablemate and Ger Lyons’ Sister Rosetta that day, but this course and distance proved to suit her much more than it did them as she flew by both in the final furlong to win going away.

A Taad Moody and Monday should both take huge steps forward from their promising debuts, but that should still leave them with something to find with this daughter of Zoffany. She can win this well and kick off what could be a great day for her yard.

HIT it big in the Petingo with HALIMI. Willie Mullins has won this a few times in recent seasons, but his Buildmeupbuttercup has a habit of finding a way to lose these big handicaps and his other runner Royal Illusion comes here fresh – a big obstacle to overcome given that she faces so many race-fit rivals that have been putting in good performances all season.

One such type is the Jim Bolger trained Halimi, a tough stayer that wears his heart on his sleeve and is nigh on guaranteed to give you a run for your money.

He’s been to all the big parties since his win at last year’s Galway Festival and he can reward each way support under the ever-reliable Kevin Manning.

Persia is clearly interesting if the money comes for him, but first reserve War Diary is the one to beat if getting a run. He’s back to the same mark he was when finishing off last season and his supporters are ready and waiting for him to run.

He could be challenging for favouritism if one comes out.

KEEP the Peace in the Matron. PEACEFUL is a class act and she looks the one to beat now dropped back to a mile.

Aidan O’Brien’s Classic heroine looked an absolute machine when winning the Irish Guineas in June and shaped better than the bare form when third in the French Oaks. She never got a clear run at Chantilly and in my opinion, Seamie Heffernan did not give her the best ride.

She refused to settle off a slow pace and was bullied out of her early handy position by the rider of Fancy Blue. She has been absent since, but that is no bad thing given that she won the Guineas on her seasonal debut. A positive ride around here will make her hard to catch.

Johnny Murtagh’s pair Champers Elysees and Know It All are respected, but both still have a way to go to match the level of the selection and Fancy Blue.

Donnacha O’Brien’s filly sets the standard after doubling up her French Oaks win in the Nassau, but both of those races were over a mile and a quarter and I am not sure if she possesses the tactical pace to be competitive early on over a mile.

She will be running on late, but the bird may well have flown before she hits top gear.

He lost nothing in defeat when just coming up short in the Futurity last time. The Curragh Group 2 contest was a tactical affair where the runners barely changed shape from start to finish.

The winner was in second throughout and Cadillac did remarkably well to split them considering where he was positioned early. Take nothing away from the winner, but it was one of those races where nothing was going to get into it from behind.

I think Jessie Harrington has a very smart colt on her hands and the Guineas dream will be very much alive after he wins today.

Fernando Vichi is a fine stamp of a horse and he looked a serious prospect when bolting up here in July. He rates a big danger. Another that should take the step up to Group level well is Blue For Nothing. He is talented and the maiden he won at Galway was very competitive.

Fourhometwo could be underestimated with the once-raced maiden winners Ides Of August and Jack Duggan representing major yards.

SOTTSASS can land the Irish Champion Stakes for France. Trainer Jean-Claude Rouget knows what it takes to win this after landing it four years ago with a similar type in Almanzor.

That one had won the French Derby before coming here to Leopardstown and the plan is for this fellow to follow in his footsteps having beaten the smart Persian King in last season’s French Derby himself.

He faces three high class operators in Ghaiyyath, Magical and Japan, but he had all three of them behind him in last year’s Arc and I think we will see the same result here if team Ballydoyle put the pressure on Ghaiyyath as expected.

They surely cannot allow William Buick to have his own way up front aboard the Godolphin powerhouse. He’s top rated in here by a clear 9lb and is absolutely lethal when left alone in the lead over this mile and a quarter trip.

Wayne Lordan should have the unenviable task of trying to put it up to the favourite on Armory and neither Seamie Heffernan nor Ryan Moore will want to give them too much rope — I think this could be ideally set up for the French raider to come late and fast under Colin Keane.

It’s all systems go for the selection as long as Ghaiyyath doesn’t get an easy time of it, but if he does he will be hard to beat.

Magical may be a smart mare, but she would have to produce a career best by some way as a five-year-old on her 25th start and Ryan Moore is riding Japan ahead of her.

He would have leading claims on last season’s best, but his form this year is a little in-and-out. Aidan O’Brien will no doubt have him fully tuned up for this highlight of the season.

Don’t miss out on all the best of Sun Racing

BET the House on LANCASTER HOUSE. He was disappointing in this last year, but I think it’s time this fellow was cut a little slack.

He came into last year’s race full of hype that had just smashed up a good Listed field five days earlier, but he was probably still feeling the exertions of that performance when unable to justify favouritism.

Roughed off for the year afterwards, he returned in good style this June when hammering Speak In Colours at The Curragh and he gave Romanised a fight in the Minstrel a month later. That is top form in the context of this race.

Stablemates Royal Dornoch and Vatican City are good horses in their own right, but Ryan Moore rides the selection so take the hint!

Century Dream, Escobar and the admirable Safe Voyage are a trio to fear coming over from the UK — especially the latter. His form with Space Blues is clearly very smart and his win at York last month was scintillating.

TIGER MOTH has plenty in his favour. Aidan O’Brien’s colt was last seen finishing second in the Irish Derby and he must go close getting so much weight off Patrick Sarsfield and Up Helly Aa.

He’s superbly bred, improving fast and already proven over both course and distance. His maiden form has been franked continually all season, he’s got Ryan Moore up and a grand draw to track the pace from. Everything seems to be in place for this three-year-old to run away with what is a very competitive Group 3.

Of the aforementioned pair, Up Helly Aa is feared most. He’s very lightly raced and just preferred to Joseph O’Brien’s ace.