There was no post-World Cup comedown for Tom Curry yesterday, as the England flanker was the victim of eye-gouging and was named Man of the Match on an eventful return to club action.

Three weeks and a day after appearing in the global showpiece final in Yokohama, the 21-year-old was back in earthier surroundings at the AJ Bell Stadium. His exploits helped Sale see off dangerous French opponents who undermined their chances of winning this Heineken European Champions Cup Pool 2 fixture by losing their heads with damaging regularity.

The worst act of foul play came two minutes before half-time during a scuffle between the packs. Tom Curry – back alongside brother Ben in the hosts’ back row – was squaring up to La Rochelle prop Dany Priso when the visitors’ hooker, Pierre Bourgarit, tried to pull him away by the face. In the process, his fingers went into Curry’s eyes. 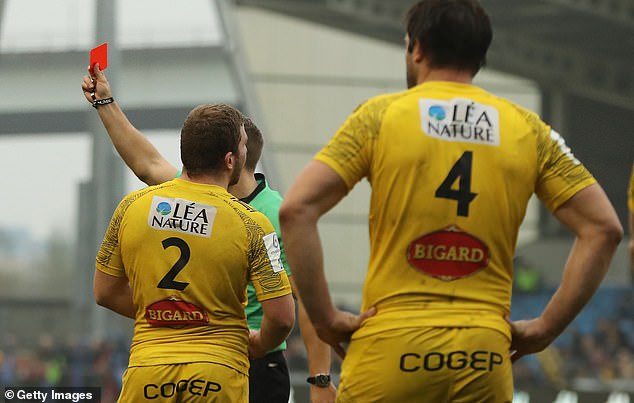 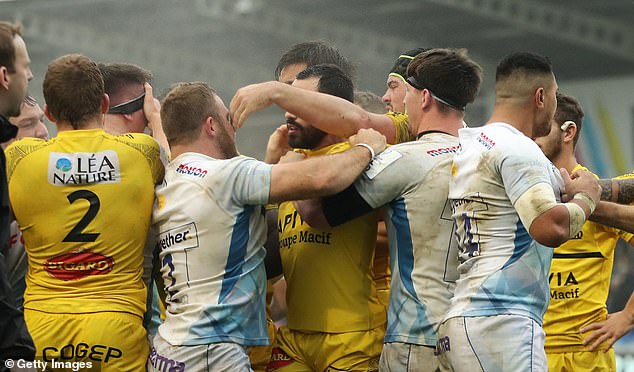 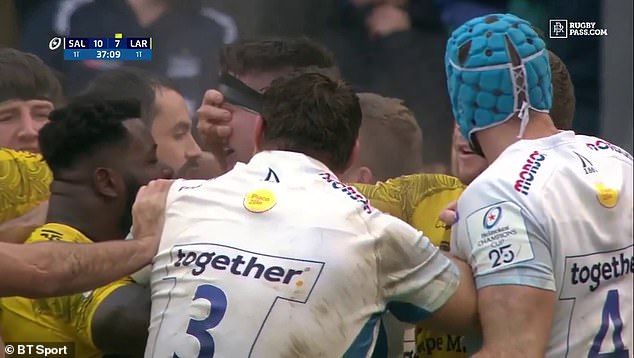 It was a clear, heinous offence and referee Andrew Brace showed Bourgargit a red card. The guilty party was booed off and disappeared down the tunnel in tears. After the game, La Rochelle captain Victor Vito made no excuses for his team-mate’s actions, saying: ‘Whenever there is a hand to the face; that is not good enough.’

Curry played down the episode, adding: ‘I didn’t even know what happened. I just felt a hand on my face.’ Asked if he felt any pressure being applied to his eyes, he said: ‘No.’ However, there was obvious intent and any contact with the eye area is likely to lead to severe judicial consequences.

There were two home-coming heroes in the Sale line-up, with this fixture also acting as a comeback for Faf de Klerk. South Africa’s World Cup-winning scrum-half was typically energetic and received a thunderous ovation when he was replaced late on, but his performance was erratic – with several errors amongst the flashes of class.

It was different with Tom Curry. He was relentlessly excellent and deserved his Man of the Match award. His alliance with brother Ben and Jono Ross gave Sale formidable power and dynamism in their back row.

The trio all tackled and carried and handled with gusto and precision. Their efforts should have created a platform for a bonus-point win, but the Sharks were unable to capitalise on their physical dominance, which extended from the scrum through most contact areas. 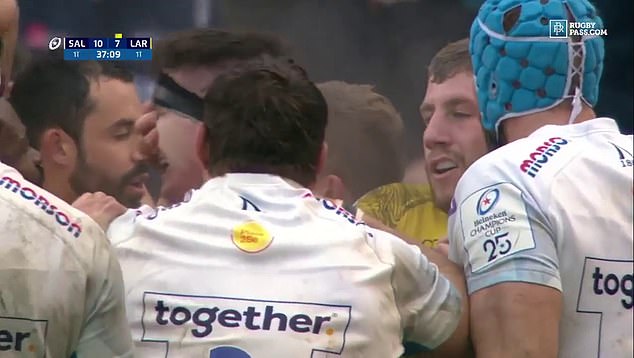 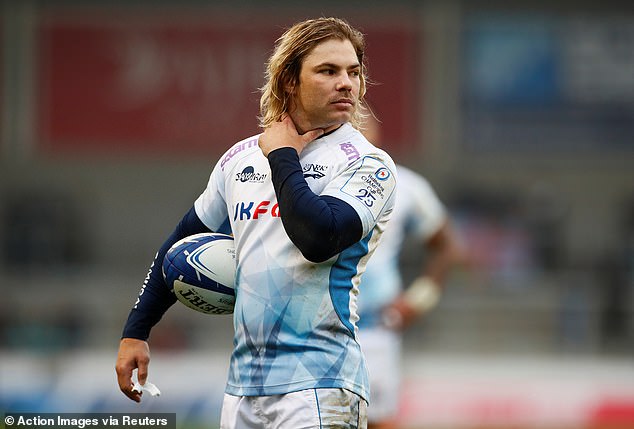 They scored a stunning, length-of-the-pitch try – finished off by a trademark ‘Ash Splash’ by Chris Ashton – which was rightly but belatedly ruled out for a forward pass by AJ MacGinty. But Rohan Janse van Rensburg had already touched down and after the break there was a penalty try which led to a yellow card for Priso, who followed Remi Leroux in having a stint in the sin bin.

A try by Vincent Rattez had kept La Rochelle in touch, somehow, but seven minutes from time Sale claimed a third try when Ben Curry charged down a kick by Brock James, kicked ahead and Ashton pounced to score after Levani Botia spilled the ball over his own line. The home side had gone on the hunt for a fourth try – for the precious bonus – but instead the French side claimed a second, by Jeremy Sinzelle, as a last-play consolation. 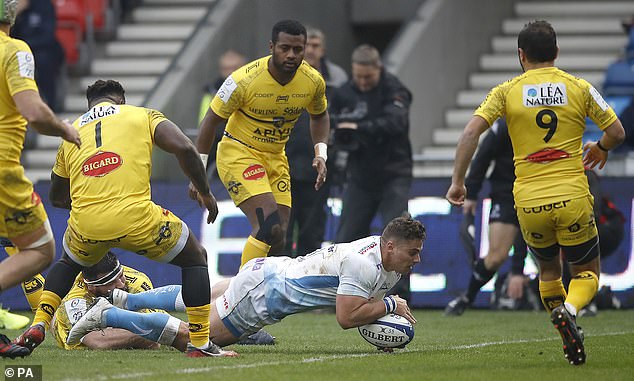 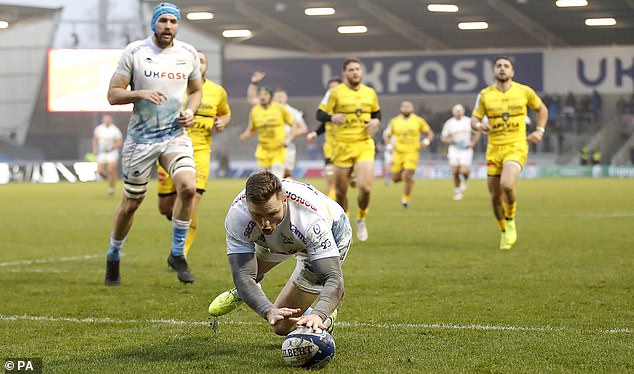 Former All Black No 8 Vito was suitably impressed by the Curry twins’ physicality and breakdown presence, and Sale have vast reserves of back-row firepower. They also have plenty of back-three fliers and continue to build an imposing squad.

Director of rugby Steve Diamond confirmed that the Cheshire club are in negotiations with Fiji lock Leone Nakarawa – who may be released by Racing 92 after a late return from World Cup duty. Sale are striving to rapidly emerge as Premiership play-off contenders and an increasingly competitive force in Europe’s premier event.

‘This was the first game back for (Tom) Curry and Faf and we will get better,’ said Diamond. ‘We’ve got to stop being the nearly men. We can contend this season. If we keep all these lads fit, we can take on anyone, especially here.’ 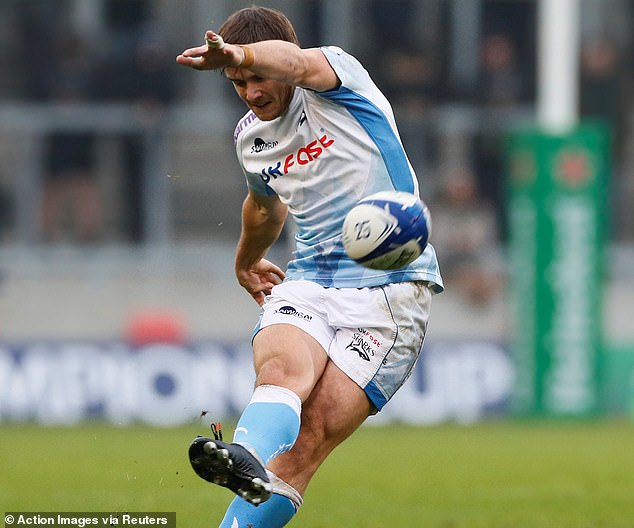