PARIS — Rafael Nadal has cemented his reputation and legacy at the French Open year after year, duel after duel, rout after rout. And he added another layer of mortar on Sunday by holding off Dominic Thiem, 6-3, 5-7, 6-1, 6-1, to win his 12th title at Roland Garros.

It was the second consecutive year Nadal had beaten Thiem in the French Open final. Nadal is now 12-0 in finals at this event, his only two defeats coming in the fourth round in 2009 to Robin Soderling and in the quarterfinals in 2015 to Novak Djokovic.

It was more mantra than question, and well before Santoro finished, Nadal was scratching the back of his head and looking a little uncomfortable. But then such moments are his own fault for enduring and dominating beyond any reasonable expectation.

[Ashleigh Barty won the women’s title. Read about how she did it.]

Roland Garros keeps changing its look and shape in the 21st century. It is vaster and more avant-garde, and perhaps someday it will even be less crowded in the passageways as tennis fans shuffle from match to match. 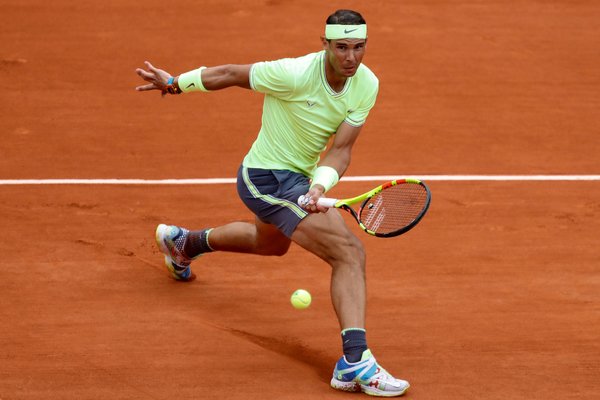 The No. 1 Court, known as the bullring, will soon be demolished. The No. 2 Court, with its two-tier stands and enchanting lack of symmetry, is already gone. Even the main Philippe Chatrier Court, where Nadal won on Sunday, has been all but leveled and reconstructed in the past year.

Nadal will someday fade from view as well — or at least spend men’s final day in the front row of the stands, his water bottles surely still in order, instead of in the arena with his socks covered in red clay.

But for now, and for honestly who knows how much longer, Nadal, 33, remains a pillar of the place: more immovable, it turns out, than many a stadium.

Nadal is the first player in any era to win 12 singles titles at the same Grand Slam tournament, breaking his tie with Margaret Court, the Australian who won the Australian Championships (which later became the Australian Open) 11 times between 1960 and 1973.

“Unreal,” Thiem said of Nadal’s record at Roland Garros. “I’m seriously sad to lose, but you’re such an amazing champion.”

The only tennis runs that bear much resemblance to Nadal’s are Court’s record, and Martina Navratilova’s stretch of dominance at Wimbledon, where she won nine titles between 1978 and 1990. But even these cannot truly compare; Court played in an era when the Australian championships often failed to attract all the world’s best players.

And perhaps nothing in tennis ever will truly compare, although Nadal, a man who runs on doubt, is skeptical.

“I consider myself a normal person,” Nadal said before Sunday’s latest victory. “I’m certain that another player can do it in the future. But it’s true that you need to have qualities, luck, physical attributes and a long enough career to do it. You need to have the possibility to play at least 11 French Opens to win 11 times. It’s complicated.”

He has won 18 Grand Slam titles over all, two behind Roger Federer’s record.

On this run to a championship, the second-seeded Nadal lost only two sets; one was to Thiem, who didn’t manage to win any sets in last year’s final.

The fourth-seeded Thiem, a 25-year-old Austrian, was playing for the fourth day in a row. A full day of rain Wednesday had muddled the schedule, and he had needed parts of two days to finish his semifinal against top-ranked Novak Djokovic. That match ended 23 hours before Sunday’s began.

If Thiem was fatigued, it did not show in the taut and thrilling first set. Then he prevailed in the second.

Thiem had chances to break Nadal in the hard-fought first and third games of the fourth set but could not convert. Thiem, looking lower on energy and inspiration, could not hold his own, and Nadal soon ran out the match, mixing successful forays to the net with his customary precision and court coverage at the baseline.

The tournament ended with a forehand return from Thiem that landed just long. Nadal, tracking it closely, watched it bounce and then went into a slide and landed on his back, arms spread wide and eyes closed.

He was undeniably a man on his element.