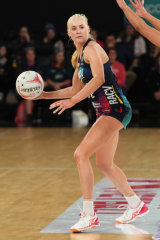 It was the famous goal circle incident of 2017: or The Push, as it became known. Liz Ellis, indeed, likened it to a supermarket shopper (Firebird Gretel Tippett) treating her opponent (Vixen Jo Weston), like a “trolley she wanted to shove to the far side of the car park’’.

Weston went flying through the goal circle; a Tippett escaped with a caution, amid calls – even then – for the introduction of a match review panel.

If that sounds familiar, then so are the Melbourne defender and Queensland goaler: 2013 World Youth Cup teammates and fellow AIS residents in the months beforehand, who like and know each other well.

They also share a feisty Super Netball rivalry that will resume when the third-placed Vixens play the winless Firebirds in Brisbane on Sunday in the penultimate round before the pair join forces for the Diamonds at the World Cup in Liverpool.

“I just think it’s always a really competitive battle,’’ says Weston, the close-checking harasser whose fine 2019 form has been matched by Tippett, the super-accurate, and now higher-volume, standout in a depleted Firebirds’ attack.

“I do really like playing against Gretel. Obviously it’s quite physically challenging, because she has a bit of height on me and she also is very athletic, and comes from a less-traditional background.

“So although she’s probably changed a bit over the time she’s been playing netball, her movements are still more characteristically basketball-like, so that brings something different alongside her physical strength.’’

The unconventional Tippett is one of the sport’s more polarising figures, with Weston among those who believe she has been judged harshly by netball’s court of opinion. Certainly, there were no hard feelings from Weston after The Push, for there is also more than a hint of white-line fever in the super-smart and rather quirky Vixens star, who admits that occasional on-court frustration is a trait she and Tippett share.

There are others. Such as hair colour – Weston’s being, ahem, her own. “Gretel’s such a lovely girl, she’s very genuine, and she’s hilarious as well,’’ says Weston.

“I have told her to stop dying her hair blonde – she’s going to end up with no hair at one stage because of that bleach!

“But that’s a woman’s prerogative to choose what they want – people probably always say the same thing when I fake tan, but each to their own! I’m white as a sheet.’’ 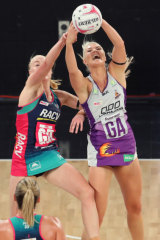 And as competitive as they come, as part of what is a formidable back three with keeper Emily Mannix and WD Renae Ingles – the latter MVP for the past two weeks. After three wins to open the season, the past month has brought one win, one draw, and two losses, including the most unpalatable of all: to the rival Magpies before a full house at home last Sunday.

A slow start was again an issue, as it was, even more dramatically, in the Vixens’ first four minutes of the season, in which they trailed the Firebirds 1-8 before turning the match around. Melbourne’s collective defensive unit was so effective that Firebirds great Romelda Aiken ended up on the bench, and while Weston modestly leaves herself out of the acknowledgements for that 73-61 victory, she admits she will be looking to curb Tippett’s output more effectively this time.

The injury-hit Firebirds recently added internationals Lenize Potgieter and Erin Burger to their squad as they chase their first win of 2019, but Tippett has been the standout, averaging 30 goals a game and missing just five of her 214 attempts.

After that game back in 2017, Weston recalls she “apologised profusely” for The Push. Not that the Victorian was bothered by something she attributes to the strength of a boxing-out manoeuvre unappreciated by her opponent, coupled with some unfortunate timing.

“She did give me a decent shove – it wasn’t just me falling over as some attackers like to do these days in order to gain a penalty,’’ laughs Weston. “I just went flying! In hindsight I find it kind of funny.

“I knew that it was just the heat of the moment and I don’t think it should be held against her. I do think a bit of the vitriol Gretel got from people within the netball community was pretty harsh, and obviously given her [basketball] background she’s faced a lot of backlash … she’s had it pretty rough coming into the Diamonds team over other people’s ‘favourite athletes’, as well.’’

On current form, both could claim to be coach's favourites, and will soon be World Cup debutantes, as well. But there are two matches to play before then – for the Vixens, who then face the Giants, both are on the road.

“We want to put ourselves in the best atpossible position,’’ said Weston, who will also be joined in Liverpool by Vixens' teammates Liz Watson and Caitlin Thwaites.

“We want to be winning games and quarters to give ourselves the best chance the tail end of the season when everyone comes back.’’