A story published by the Detroit News this week had golfer Phil Mickelson threatening Thursday to never return to the Detroit area.

Then on Friday, Mickelson – who’s in Michigan to compete in this weekend’s Rocket Mortgage Classic – reversed course, sort of.

The 51-year-old California native, whose PGA Championship win in May made him the oldest golfer to ever capture a major tournament title, said he would return to the Detroit area on two conditions: that a petition circulated by Michigan golfer Mike Sullivan, calling for Mickelson’s return, reach 50,000 signatures, and that everyone who signs perform “one random act of kindness,” he said, according to ESPN. 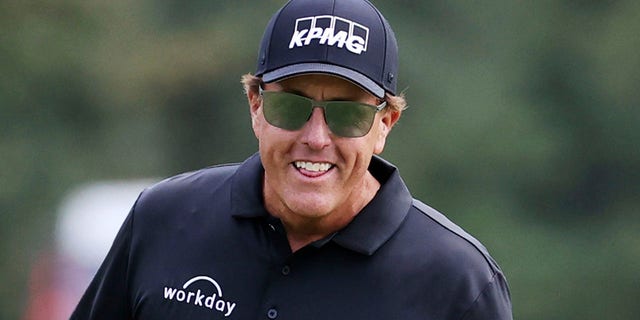 Phil Mickelson is seen at the Country Club of Virginia in Richmond, Virginia, on Oct. 18, 2020. (Associated Press)

Later Friday, the Children’s Foundation of Detroit announced that Mickelson and his wife Amy Mickelson had donated $100,000 to the organization, the newspaper reported.

This weekend marks Mickelson’s first tournament in Michigan since the 2008 PGA Championship at Oakland Hills, the News reported. He was supposed to play in last year’s Rocket Mortgage Classic but the coronavirus pandemic forced a rescheduling to a week when he couldn’t appear, the report said.

None of Mickelson’s 45 career PGA Tour victories have come in Michigan, the report said.