Michelle Alonso arrived at her seat in section 114 at Citi Field shortly before first pitch on opening day in March. Her husband, Peter, was at her side, as they watched her firstborn, also Peter, be announced to the crowd of 44,424 fans as the starting first baseman, batting second.

It was his home debut. Baseball was on parade, but her mind marched back to a quieter time in Queens, her family’s only previous visit to the stadium. It was in the summer of 2016, when Alonso signed his first contract as the Mets’ second round pick — No. 64 overall — in Major League Baseball’s amateur draft.

“So bizarre,” she says. “Nobody was here. Front office people were out. He just signed quietly in a conference room and they ordered pizza. Still, you felt, hopefully one day he’ll be here, and this is the day.”

When he walked to home plate for the first time, the stadium speakers played Cody Johnson’s “Welcome to the Show.”

Alonso, 24, is the must-see Met at the moment. For nightly viewers of the team’s long-running tragicomedy, he offers moonshots and much-needed mirth. In the wake of David Wright’s retirement and Yoenis Cespedes’s rehabilitations, he has filled the offensive void with a knobless bat and boyish exuberance. On pace to surpass Yankees right fielder Aaron Judge’s record of 52 home runs as a rookie with 53, Alonso is the Mets’ homegrown answer to the Yankees slugger. His ability to do so with an eager gait and gracious demeanor has been noticeable when compared to other recent star turns down the No. 7 line.

“For a rookie to kind of take on that leadership role like he’s doing, and perform like an All-Star, it’s unbelievable,” Mets Manager Mickey Callaway says. “And it’s because he does everything the right way at all times.”

The next stop on Alonso’s learning curve is the Subway Series in the Bronx. For Yankees fans just tuning in, here is the scouting report on No. 20:

1. He is known as “The Polar Bear” among his teammates and coaches. His beard, paunch, dense build (6-foot-3, 245 pounds), raw power and general good nature earned him the nickname.

“I’m not surprised,” his mother says. “I’ve got a picture of him shirtless on the Mendenhall Glacier in Alaska because he was like, ‘It’s not cold here.’ He was in eighth grade. This kid.”

“I was like, ‘Whoa, that was sick,’” Alonso says. “Probably one of the most interesting ones I’ve hit, for sure. 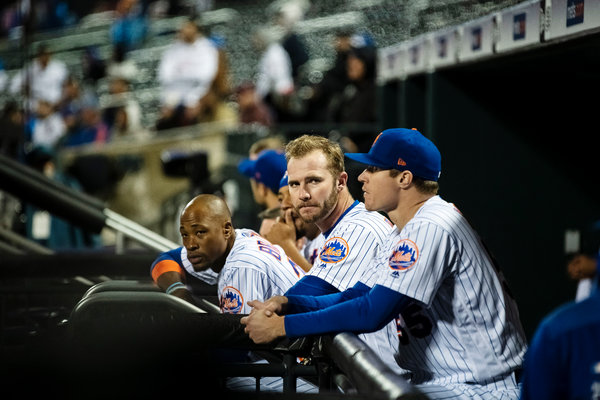 3. He is taking notes. He keeps a marble composition notebook in his locker with his name, “Peter Alonso,” and the year, “2019,” on the cover, like a schoolboy’s diary.

After each game and before he showers, he spends two to three minutes at his locker jotting down thoughts about how he performed, what pitch sequences the opposition threw him and how he can improve.

“If I start thinking too much, then the wheels start turning really fast and I get kind of out of control,” he says. “Once I step in that box, I turn the brain off.”

“I just like the style,” he says. “I’m not going to show up in a full ghillie suit.”

5. He is a former Yankee. Alonso was raised in a house five miles from George M. Steinbrenner Field and played for the Yankees in the Tampa Bay Little League with Steinbrenner’s grandson, Joe.

After he won a title in 2002 at age 7, Alonso received a letter from the former Yankees manager Joe Torre congratulating Alonso for “upholding the reputation of our team.” Alonso framed it and hung it on his bedroom wall.

6. He’s always had a grown-up appetite. Alonso was not allowed to eat off kids’ menus growing up, as his parents felt that processed food was bad for any body.

Now, he cooks and appreciates a good wine pairing.

7. His cooking education went beyond food. His father’s approach to breaking in baseball gloves included lathering them in shaving cream and sticking them in the oven in order to loosen it up. It is a tried and true method, but the elder Alonso admitted he left it in a little too long. “It singed the strings,” he said. “My wife was like, ‘What are you doing?’ It smelled like burning skin.”

8. There are steps on his baseball journey that stay with him. The summer before he entered high school, he played a two-week tournament in Vienna, Austria, with Team USA during the Friendship Games.

Off the field, he recalled visiting Mauthausen, the site of a Nazi concentration camp. The image of the “Stairs of Death,” where prisoners were forced to carry blocks of stone up 186 steps, has never left him.

“Put a lot in perspective,” he says. “Definitely a necessary experience.”

9. He has his differences with the Mets ownership. Sure, he appreciated being given the opportunity to start this season in the majors after the team refused to call him up to the big leagues last September — despite hitting 36 homers in the minors.

But, while Alonso went to the University of Florida and led the Gators to the College World Series in 2016, his family also has deep ties to Ohio State. He is aware that the Mets owner Fred Wilpon is a Michigan man with great affection for his alma mater.

“It’s kind of funny that the Wilpons are Michigan fans,” says Alonso. “Everyone in my family, we just hate Michigan.”

10. He is not kidding about his ill will for college rivals. When the Mets played in St. Louis, Alonso was hit in the hand, and was expected to rest the next day. But while Callaway was out to dinner with his parents that night, he received text messages from Alonso. In the next game, the Cardinals were starting Dakota Hudson, whom Alonso had faced at Mississippi State.

“He was like, ‘Hey, I want to play tomorrow. I hate this guy. I played against him in college,’” Callaway says. “He was going nuts.”

11. Alonso is headlining his own production of “Frozen,” co-starring opposing outfielders. His line drives are hit with such force that fielders are left with no choice but to freeze.

“I haven’t seen too many home runs where nobody in the field moved,” his teammate Brandon Nimmo says, recalling a spring training homer against the Red Sox. “Literally no one moved.”

12. Do not poke the polar bear. On the last day of spring training, Jeff McNeil, the Mets’ utility fielder who answers to the nickname “Flying Squirrel,” mashed his fourth home run to tie Alonso for the team lead.

“So, you and me got the same amount of pop,” McNeil told Alonso in the dugout. “We’re the same player.”

Alonso outweighs McNeil by 50 pounds and has a good three inches on him, and has 19 more home runs than him this season.

13. He has served as chauffeur for his chief competitor for playing time. After an event with sponsors in March, Alonso and Dom Smith, who were neck and neck in a battle at first base, realized they lived just a block apart. Alonso offered Smith a lift, and they have formed a bond since.

After a recent victory, Alonso, the starter from Florida, and Smith, the reserve from California, could be heard trying to pronounce the Mets’ rallying cry at their neighboring lockers.

14. He is reading “Crossing the Line: The Outrageous Story of a Hockey Original,” by the former Boston Bruin Derek Sanderson. Sanderson racked up 98 penalty minutes as a rookie, won two Stanley Cups and co-owned the nightclub Bachelors III with Joe Namath during Broadway Joe’s heyday in New York. Sanderson wound up homeless and sleeping on a Central Park bench before rebounding to serve as a financial adviser.

“Just trying to get inside his head,” Alonso says.

15. He will throw his weight around — probably. When the Mets seemed on the verge of a fight with the Phillies during a game in April, third baseman Todd Frazier noticed Alonso’s eagerness.

“I think he was a little excited,” Frazier says. “He ran over. I’m like, Here comes this polar bear, what is he doing? I told him, if he wants to stand next to me go ahead.”

16. He has a favorite comic book hero, and it’s not the Dark Knight. “I’ve got a special pair of Superman underwear,” Alonso says while standing with his fiancée before a private screening for “Avengers: Endgame” in Times Square.

17. He regularly reminds himself that baseball is a game of failure. While Mets fans are “absolutely crazy about supporting the team, and I love it,” he says, they can also challenge his relentless positivity. As clamors about Callaway’s employment status grow louder, Alonso noted, “This game, it can be very rude at times.”

18. He’s earned respect from the defending N.L. Cy Young Award winner. After Alonso hit his first homer in Miami, Jacob deGrom — the last Met to win rookie of the year honors — approached Alonso, and the two shared a quiet exchange.

“The guy has some of the most power I’ve ever seen,” deGrom says.

19. He is ready for Yankee Stadium, where the Mets will take on their cross-town rivals in a two-game series starting Monday. One of his penchants is to drive outside pitches the opposite way, and the right-field porch is just 318 feet from home plate in the Bronx. Bonus: He can leave his glove in Queens as Callaway plans to use him as the designated hitter Monday night.

With Judge sidelined because of an injury, Alonso will have the stage to himself.

“I don’t want to compare myself to anyone or put myself in a box or mold,” Alonso says. “I just want to continue to evolve and just be my own player. Hopefully one day people will say, ‘He’s Peter Alonsoish.’”

20. His bat could help pay some upcoming bills. If he is selected to participate in this year’s home run derby — a prospect he called “mind boggling” — he’d have incentive to try to win it. As a rookie, he is making the league minimum $555,000. This year, Major League Baseball added a $2.5 million pool of bonuses for the derby, including $1 million for the winner.

“That would definitely pay for the wedding costs,” he says.