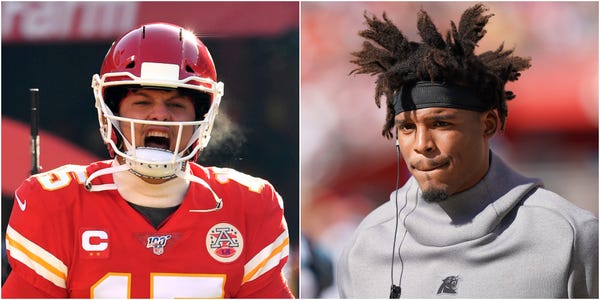 "Man, he's changing the game," Newton said of the Kansas City Chiefs quarterback Thursday, according to ESPN. "I think he's shining light on the new wave of quarterbacks. It's just fun to watch."

After guiding the Chiefs to last season's Super Bowl title and winning the Super Bowl MVP award in the process, Mahomes has started this year in similarly devastating fashion by getting Andy Reid's team off to a 3-0 start.

The 25-year-old has completed 82 of 121 passes for 898 yards, with nine touchdowns and no interceptions, and has also rushed for 80 yards on 10 carries and one touchdown.

"It's not like he's just back there and it's an arcade game," Newton said. "Sometimes it looks like it, but he knows exactly what he's doing and how he's manipulating the defense.

"That's the same thing that the Dan Marinos used to do. Obviously the Tom Bradys. The Aaron Rodgers. Those guys really have so much command of the offense that you dictate to the defense. That's what he's doing. He's playing the game at a high level."

According to ESPN, Mahomes said he was flattered by Newton's comments, adding that he wishes he "could do some of the things he does."

Newton faces off against Mahomes for the first time in his career on on Sunday at Arrowhead Stadium as the Chiefs host the New England Patriots.