The letters were an endless well of racism and hate, the pages filled with bile, rage and even death threats, all because of the color of Henry Aaron’s skin.

Most were sent during his baseball career, when Aaron dared to challenge the sacred record of a white man. But some came years later, when he dared to challenge politicians who continued to traffic in racism and white resentment.

And because they did, he changed us.

Many of the tributes to Aaron, who died Friday at 86, will focus on his accomplishments as a baseball player, and these are noteworthy. But he deserves equal, if not more, celebration for his quiet work as a civil rights icon, his impact becoming more apparent the further from the baseball field he got.

MORE:  We may never see another hitter like Hank Aaron

Jackie Robinson broke Major League Baseball’s color barrier as the first Black player, and Frank Robinson was the game’s first Black manager. Aaron was no less influential. He was the first Black star of a professional team in the South when the Braves left Milwaukee for Atlanta in 1966, and his dignity in the face of relentless abuse during his pursuit of Babe Ruth’s home run record paved the way for greater racial tolerance.

Not that any of it was easy, or a road Aaron wanted to take. He was forced to travel with bodyguards because of the threats against him, and spoke of sneaking in and out of ballparks and staying in a separate hotel from the rest of the Braves. His children, his oldest daughter in particular, had to be given police protection.

The Atlanta Braves even hired off-duty officers to sit in the stands to guard against anyone trying to harm Aaron while he was in the outfield. 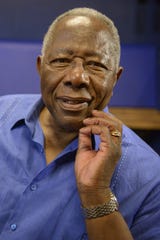 Hank Aaron told USA TODAY in 2007 that he kept the racist letters and death threats he received during his pursuit of the all-time home run record to remind himself of how far the nation still has to go. (Photo: Michael A. Schwarz, USA TODAY)

Though Aaron was indignant at the abuse and contempt he was subjected to, he rarely let on when he was playing. Some of his teammates were aware, but to the public he seemed stoic and unbowed.

But his quiet demeanor was not a sign of acceptance. When he eventually revealed the full scope of the abuse, he made clear how demeaning it all was and the deep scars it had left.

“All of those have put a bad taste in my mouth, and it won’t go away,” Aaron told the New York Times ahead of the 20th anniversary of his landmark 715th home run. “They carved a piece of my heart away.”

Aaron didn’t share his pain simply to clear the air. He wanted white America to recognize it and, more significantly, atone for it. By that point, Aaron had become a beloved figure in American society. “Hammerin’ Hank,” the home run king who now seemed larger than life — certainly larger in stature than he was in real life.

You could not be a baseball fan and not be a fan of Aaron’s, and you couldn’t well do that while still tolerating racism and bigotry. For some that meant reckoning with, and eventually discarding, their own biases. For others it meant recognizing the base evil and ignorance of racism. 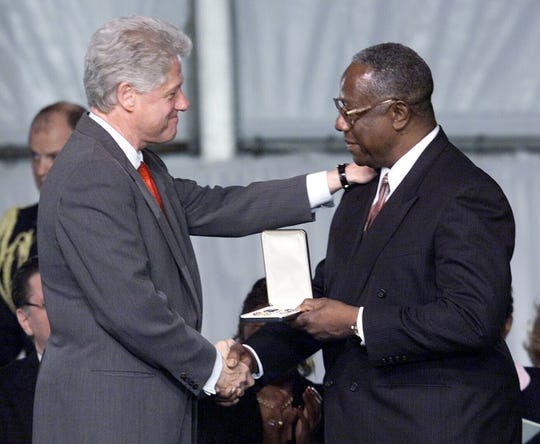 Either way, he helped many Americans look past the color of a man’s skin and see the man himself, bringing us a little closer to the equality this country has promised us. Indeed, without Henry Aaron, former President Bill Clinton said in 2009, there is no President Barack Obama.

“We’re a different country now,” Clinton told Aaron at his 75th birthday party. “You’ve given us far more than we’ll ever give you.”

Appreciative as he was of finally getting the respect he deserved, Aaron had no use for a sanitized version of racial reconciliation. When Republican politicians stonewalled Obama and tried to couch their prejudice toward him in politics, Aaron called them out. When he agreed to show himself getting the COVID-19 vaccine earlier this month, he did so to reassure Black people, who have well-founded suspicions of an American medical system that has abused and still ignores people of color.

Almost seven years ago, USA TODAY’s Bob Nightengale asked Aaron why, after all these years, he still held onto those awful letters.

“To remind myself that we are not that far removed from when I was chasing the record,” Aaron said then. “If you think that, you are fooling yourself. A lot of things have happened in this country, but we have so far to go.”

That was made clear three weeks ago, when a mob of aggrieved and deluded people, almost all of them white, stormed the U.S. Capitol, angry that “their” country was being stolen from them. Theirs was the same vitriol Aaron was too often subjected to, and his death reminds us that his work is not done.

Only now it is ours to do. Let the record books reflect Aaron's impact on baseball. Let us be a reflection of his impact on this country.