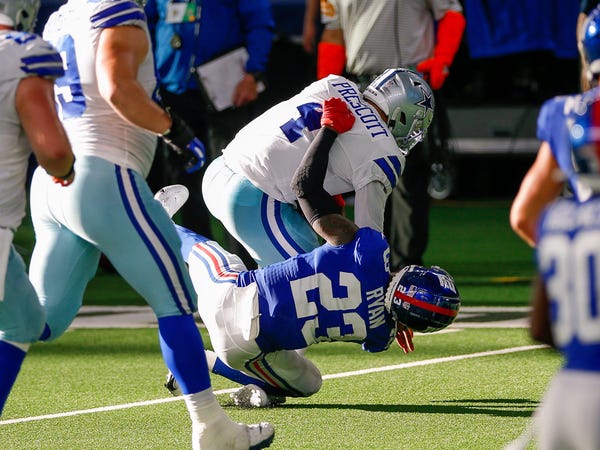 After tucking and running with the ball in the third quarter, Prescott was brought down by Giants defender Logan Ryan. It was a clean, legal tackle, but Prescott came down awkwardly and left his right ankle in tatters.

For Prescott, the injury comes at a brutal time, as he was playing out the season on a franchise tag — a one-year contract at a set rate. His representatives and the Cowboys have been negotiating a long-term deal to avoid free agency or another season on the franchise tag.

Now with his injury, the hundreds of millions of dollars that Prescott could have signed for are up in the air, to no fault of his own.

Ryan, who tackled Prescott, said he felt terrible after the game and made the case that the injury should not affect Prescott's next deal.

"First and foremost, the worst thing that happened today was the Dak injury," Ryan said after the game. "I mean, it's bigger than football. I feel terrible. It was a routine football play. Look, I study a lot. I thought this game would come down to me and Dak. I know it's a team game, but my job in this game plan was to make it tough on Dak. He made it really tough on us. He's a hell of a player. He's got a lot better in his reads. He's got a really good arm. He was tearing it up there. He was making it hard on me. That's why this sucks.

"You have a guy who — I'm in a similar position. He's scratching and clawing with one year on his deal to try to get rewarded and try to do the right thing. He's trying to show up for work and trying to lead his team and trying to get a lucrative contract and had to come out and prove it this year. For him to come out here and get this type of injury, that's why I feel like that. Dak, I hope he gets $500 million when he comes back. He deserves it. He's a hell of a quarterback."

Logan repeated his call for Dak to get paid on Twitter after the game.

Football is a brutal sport, and injuries are a part of the game, but some hurt more than others. If Prescott can make a full recovery and get the contract he deserves heading into next season, it'll make this one hurt a little less than it does right now.