As president of the board of the nonprofit that oversees one of the most prestigious ultradistance races in the country, John Medinger has had to deal with many concerns: sponsors, weather, permits, volunteers.

But it wasn’t until this year that he and his colleagues at the Western States 100-Mile Endurance Run were compelled to address an issue few would have envisioned when it was first held in 1974: transgender competitors.

“It’s not something we would have been thinking about back then, that’s for sure,” said Mr. Medinger, 68, who has run Western States five times and has been involved in race management since 1991. “But it’s the nature of society now.”

And it’s something that the world of competitive athletics, including the Olympics, USA Track & Field and the National Collegiate Athletic Association, has been grappling with: how transgender women, in particular, should be entered and scored in competition and whether they have an unfair biological advantage over cisgender women, whose identity reflects the sex they were assigned at birth.

Although the science is mixed on the biology, some people contend that transgender women have an advantage because of size and the presence of testosterone, even though hormone levels change during transition.

But others, most notably the researcher and transgender runner Dr. Joanna Harper, are skeptical that such an edge exists, particularly in endurance sports in which (as opposed to say, sprinting or shot-putting) transgender women appear to have similar cardiovascular measures as cisgender women and thus little or no advantage.

While Western States starts near the site of the 1960 Winter Olympics, it is not the Olympics; nor the Boston or New York City Marathons for that matter. And it is not governed by any higher racing authority.

No prize money, scholarships or endorsement deals are at stake. Still, in the fringe sport of ultrarunning (generally defined as races further than the traditional 26.2-mile marathon distance) a strong showing at Western States is an enormous achievement.

There are no gold medals, but there is some precious metal involved: a handmade silver belt buckle for those who manage to complete the distance in less than 24 hours.

On June 29 and 30, 369 runners (chosen through a lottery entered by 5,862 runners) will take on the Western States challenge, as they attempt to navigate a mind-and-body-boggling 100 miles of trails and altitude changes from Squaw Valley to Auburn, Calif. The swiftest will be running to finish among the top 10 men or women. Recognition is also given to the top three males and females in five age groups from 30 to over 70.

The question of transgender fairness arose for Western States in December, when Grace Fisher — a transgender runner who is an outstanding ultradistance competitor — was selected through the race’s traditional lottery system.

The event’s management team decided it was time to come up with a policy. “We felt that this was not something we should ignore,” said Diana Fitzpatrick, a board member. “If it turned out that she finished in the top 10, it would be better for her and everyone that we had a policy in place.” 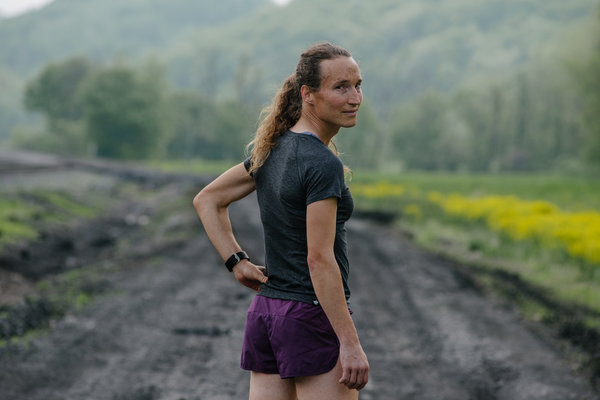 Back in high school in Utah, Ms. Fisher, now 38, was a male-identified track runner. She recalls that when some teammates ran a local marathon their senior year, “I said, ‘I’ll never do that, it’s crazy.’” Eventually, Ms. Fisher began running distances far longer than the marathon. She has completed about 40 ultramarathons, including eight 100-mile races.

She continued running during the years when, she said, “I was figuring things out.” After hormone treatments, she ran her first ultramarathon as a woman in 2015. She said she slowed down since her transition as a result of muscle mass loss, which can be attributed to hormonal treatments.

But Ms. Fisher, who lives in Hancock, Md., ran a personal best time in a 100-miler in Virginia last September of 18 hours 41 minutes. She was the first female finisher and fifth overall in that race.

Ms. Fitzpatrick, 61, a lawyer who is also a runner (she, too, has competed in Western States five times), worked with a committee of four other board members to develop the policy. They looked at existing guidelines from other organizations and races, and spoke to leading figures in transgender sports.

During the process, they were also cognizant that the runner who had sparked their action did not ask for the guidelines.

“The whole transgender issue is one that’s very private,” Ms. Fitzpatrick said, adding that she wasn’t sure Ms. Fisher “ever wanted to be the poster child for transgender ultrarunners who happen to be good.”

The guidelines they came up with, and which were announced in March, are being viewed as a model for other participatory running events.

“Western States has gotten out in front of the issue,” said Amby Burfoot, the former editor of Runner’s World magazine (and 1968 Boston Marathon winner), who has written extensively on transgender inclusion in racing.

“It seems to me that everyone should be welcome to run the race. And if someone finishes high in the standings and questions are raised as to whether it’s the appropriate division, it’s totally within the right of race management to decide how they want to deal with that rare situation of who belongs in what gender.”

Ms. Fitzpatrick acknowledged that “we really tried to have a `live and let live’ view on this.”

Hence Western State’s guidelines state that “a runner’s self-declared gender at registration will be accepted at face value.” No one need produce a driver’s license or other identification as has been the case for some races.

If, however, a finisher in the top 10 or among the top three in their age group is challenged, race management may ask the runner for documentation that they have undergone medically supervised hormone treatment for gender transition for at least a year before the race.

Even in the event that a transgender runner wins an award or is challenged and the challenge is upheld by race management, the guidelines state that “the runner will be allowed to keep their finisher’s buckle.”

That allowance, Ms. Fitzpatrick says, is to underscore that the new guidelines are “not about punishment.” By contrast, competitors who violate Western States doping policy are stripped of their silver buckle — as well as whatever other award they won.

The guidelines differ in two ways — one significant, one subtle — from those adopted in 2016 by the International Olympic Committee and followed by many others, including USA Track & Field, the national governing body of the sport.

In the Olympics, transgender women competitors must provide medical proof that their total testosterone levels have been below the normal threshold for men for at least 12 months before competition. By contrast, trans women competitors in Western States who win an award and are challenged need only show proof of supervised transition treatment.

Also in the Olympics, athletes who declare their gender identity as female cannot change that declaration for four years. At Western States, simply put, you are who you say you are, and there is no duration for such a declaration.

“I was impressed,” said Ms. Fisher of the policy. “They put a lot of work into it, and you can tell, it’s fair to the average person and also for those on the competitive side.”

She also appreciates the welcoming attitude of Western States, not to mention their concerns for her privacy.

Ms. Fisher has experienced her share of transphobia. “Most of it’s from internet trolls, and I ignore them,” she said. “In person, people have been good and very supportive.”

Mr. Burfoot said he believed this is in keeping with the historically democratic spirit of the running movement, which early on welcomed women and, later, disabled people. “I think it’s a complete nonissue among the vast majority of us in the sport,” he said.

Which is why, Ms. Fitzpatrick said, she, Mr. Medinger and her colleagues at Western States wanted to create a policy that was sensitive, as well as fair.

“Underneath this all are real people with real feelings who have usually had a long, hard journey to get where they are,” Ms. Fitzpatrick said. “The last thing they need are additional challenges and hurdles.”