Swifts coach Briony Akle has urged Netball Australia to create more pathways in an effort to increase diversity at elite levels, with just one Indigenous player contracted across the entire Super Netball league.

Firebirds star Jemma Mi Mi has been the sole Indigenous player for the past two years despite a number of NA initiatives. The issue will be front of 'mind during Indigenous round this week, and Akle said it was time to do more. 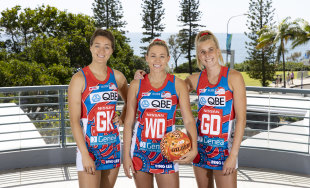 This week, Swifts players will run out in a design created by Iman, a boarding school student in Darwin who comes from a remote community in the Northern Territory.Credit:Barry Alsop

This week, Swifts players will run out in a uniform designed by Iman, a boarding school student in Darwin who comes from a remote community in the Northern Territory.

Star defender Maddy Turner said the players were honoured to wear the design during Saturday's match against the Thunderbirds.

This year's Indigenous round will be played in Far North Queensland, with games taking place across Townsville and Cairns.

"It is vital that this goes from strength to strength each year as diversity, inclusion and reconciliation are key parts of Australian life," Turner said. "Netball is part of the fabric of Australian life too so they go hand in hand. Given the theme of this year’s round and the fact we’re all going to be in Far North Queensland, it will be a really special weekend.”

Turner said her side has experienced a rollercoaster of a 2020 season.

"What I really love about the dress is the large curved band which says that no journey is ever straightforward," she said."We parked the success of 2019 long ago and 2020 has had a lot of ups and downs for us so far.

"But we are here in Queensland, still on the journey and looking to ride the curve to the other side. We believe great things can still happen for us this season."