Aaron Davis’s wife thought it was absurd when he spent $312,000 on a one-of-a-kind LeBron James trading card in 2016. That assessment has not been officially retracted, but only five years later the card could fetch well over 10 times that at auction, experts say.

In July, another James card — this one not nearly as rare — sold for $1.8 million. That caught Davis’s attention because there are only two versions of that particular card that share the same high quality, and Davis, a 42-year-old investment manager in California, owns the other one.

Davis keeps those two cards, with a combined worth in excess of $7 million, safely squirreled away in a bank vault with some of his other prized specimens.

“Every time I buy a card I feel like I’m a little bit crazy, too, and the rest of the world might also think that,” Davis said during a telephone interview in which he revealed, for the first time publicly, that he owns the two million-dollar cards. “But that’s when you’re buying a good card, because they are irreplaceable. There are two of them, and they are in tight hands.”

The folklore that has built up around valuable, vintage sports cards over the last few decades is a romantic one. Antique trading cards, each one a colorful, pocket-size painting depicting a legendary player, fortuitously discovered after surviving decades in attics and shoe boxes, only to then realize staggering sums on the resale market.

A Honus Wagner baseball card from the early 20th century was long considered the holy grail of collecting, with the few good ones that exist selling for hundreds of thousands of dollars 30 years ago and now worth a few million each. In January, a 1952 Mickey Mantle rookie card set a record when it sold for $5.2 million thanks to its unusually pristine condition.

But players no longer have to be dead — or even retired — for their cards to sell for astronomical figures. Until that Mantle card sold, the most money ever paid a sports card was $3.9 million, for a Mike Trout rookie card made by Bowman in 2009. 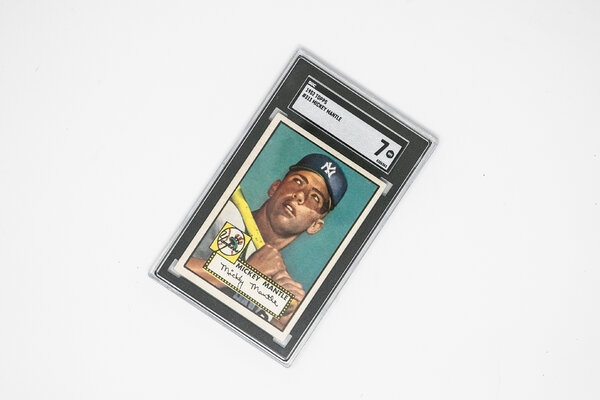 The buyer of that Trout card, who remains anonymous, could have purchased a Brooklyn brownstone for that amount. Instead, they spent it on a small piece of cardboard depicting a 29-year-old slugger who has never won a World Series.

“Maybe I should have kept that one,” Trout joked with reporters a few days later.

Trout’s card sold in August, shortly after the market for modern cards went into overdrive. In September, two months after the James rookie card sold for $1,845,000, a Giannis Antetokounmpo rookie card produced by Panini fetched $1.9 million. Antetokounmpo is 26, with barely eight seasons in the N.B.A. and a full career ahead of him.

“The modern cards are taking the market by storm,” said Chris Ivy, the director of sports at Heritage Auctions. “The vintage market is very strong, too, but the modern cards have joined in.”

Of the top 10 prices paid for sports cards at public auction, seven were cards of modern stars who were playing as recently as 1999, and five of the 10 cards have players pictured who are still active. The list, however, is ever changing. A rising star card in the collectibles world is an immaculate so-called Logo Man card of Zion Williamson and Ja Morant (the top two picks from the 2019 N.B.A. draft). It can be had on eBay for a cool half a million dollars — just click on “Add To Cart.”

“The industry is at its hottest point in my 40-year history,” Ken Goldin, the founder of Goldin Auctions, said in an email. “It is nearly impossible to keep up with demand from buyers.”

Ivy said that with the coronavirus pandemic shutting down many businesses, the sports collectibles industry expected hard times, too. But the opposite happened.

“It’s not something I saw coming,” he said. “We, like many businesses, were tightening our belts preparing for a potential downturn, but the fact that we’ve see so much interest and so many people jumping in the market is a bit surprising.”

And the market continues to boil. Earlier this month, a 1997 Michael Jordan card fetched $1.4 million at auction. The soaring prices have created such a frenzy that investment groups are being formed to buy cards, making it harder for individual collectors to compete — even extraordinarily wealthy ones.

“Billionaires chasing cardboard — we can deal with that dynamic,” Davis said. “But some people who don’t have the money themselves go around raising capital to buy the big stuff, which is really annoying.”

The driving force behind the surge in modern card values, Ivy explained, is a new breed of collector, many of whom are similar to Davis — millionaires in their 40s and 50s who see sports cards as both a hobby and an investment. They hunt for the finest cards available, featuring athletes whom they actually watched play, like James, Trout, Jordan and the hockey legend Wayne Gretzky, whose unique 1979 O-Pee-Chee rookie card sold for $1.29 million in December.

The Gretzky card belongs to the older category of cards. It was printed at the O-Pee-Chee plant in London, Ontario, to be sold in wax packs along with an almost inedible piece of gum for kids to collect, trade or wedge into their bicycle spokes.

The valuable modern cards are a completely different animal. These packs are not sold by the thousands at candy stores, and no kid is likely to have ever flipped one in the park. The new ones are produced in micro batches, like signature wines, often with a swatch of authenticated uniform fabric affixed to the card, and the player’s real signature emblazoned over a flashy chrome design.

Whereas the supply of old cards from baseball’s antiquity were culled over time through wear and tear and loss, the newer cards, which date only to the beginning of this century, have scarcity built into them by limiting the supply at the front end.

Scarcity has always driven the resale prices of cards, but in the mid to late 1980s, as the hobby morphed into a lucrative business, speculative collectors began buying cards of promising baseball prospects in bulk — Gary Sheffield, Gregg Jefferies, Todd Van Poppel, to name a few — hoping each one would turn into the next Mantle rookie card.

In order to meet that demand, card companies like Topps, Donruss, Upper Deck, Fleer and Bowman overproduced the cards, which flooded the market. Today, many of those cards are effectively worthless.

But in 2003, Upper Deck made a singular rookie card of James under its Ultimate Collection imprint. That card — the one Davis bought in 2016 — contained the N.B.A. logo from James’s jersey, and James signed the card under a photo of him in his crimson Cavalier jersey. It has “1 of 1” written on the card and no other version exists. Packs of that series were sold in some retail shops at the time for $500 or more, and that James card is considered among the most prized in the world.

“I know some people out there who are trying to hunt whales,” Davis said. “I have LeBron’s whale, the only one that someone could ever get.”

But he had to go way out on a perch to get it. When he secured the winning bid of $312,000, it was considered such an outlandish amount that Goldin called Davis, a new bidder at the time, to ask, gently, if he was really going to pay.

“If this card were to be sold today, I would expect it to be the most valuable card ever,” Goldin wrote in an email, “and sell for more than $5 million.”

Davis did pay, and he also coughed up the cash for the Upper Deck Exquisite Rookie Patch card, the better-looking twin of the one that sold in July for $1.8 million (James is wearing a white jersey on that card). There are only 23 of those, but the one that sold, and Davis’s version of it, have the highest grades, according to the two main grading companies — PSA and Beckett. Those companies rate the cards according to four main factors: sharpness of the corners, quality of the surface, how well centered the design is and the crispiness of the edges. They also issue population reports to notify collectors of how many of the cards exist in each grade.

Davis won’t rule anything out, but he has no immediate plans to sell either of his prized James rookie cards, because he cherishes them so much. When he gets the urge, he ventures down to the bank vault and, under tight security, gazes over his tidy little gems.

“My wife says, ‘You like to spend time looking at cardboard,’” Davis laughed. “She’s right, but she also knows that a lot of the decisions I’ve made worked out pretty well.”