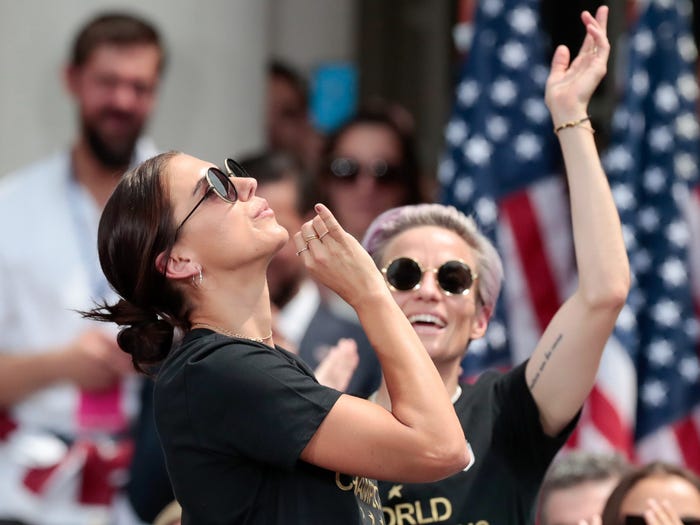 US Women's National Team superstar Alex Morgan caught plenty of flak for pretending to sip tea while celebrating her go-ahead goal against England during the 2019 World Cup.

But Megan Rapinoe thought the celebration was "f—— epic."

In her new memoir released on Tuesday, Rapinoe described watching Morgan's now-iconic routine unfold in real time and explained that "the whole thing was pretty funny, not least because England suffered a major sense of humor failure."

On July 2, the USWNT geared up to face the England Lionesses in the 2019 World Cup semifinal. Just 10 minutes into what was billed one of the top games of the entire tournament, the USWNT took a quick 1-0 lead on a header from Christen Press. But the Lionesses equalized on a one-touch from Ellen White nine minutes later, and Morgan was poised to reclaim the Americans' lead.

It was Morgan's 30th birthday, and Rapinoe recalled that her national team co-captain was "feeling pretty jaunty." So after Morgan galloped into the box and used her head to redirect Lindsey Horan's cross into the back of the net, the striker ran towards the sideline, looked up into the crowd of 53,512 fans, and "raised her pinkie in a gesture to imitate drinking tea."

Check out the clip of Morgan's goal and subsequent celebration below:

"To tease the English is such a pleasure because they react immediately and get completely outraged," Rapinoe wrote. "It was next-level trollery, provoking a ton of shit-talking from the English and sparking a whole new level of rivalry with Phil Neville's team, who are good, although not as good as Neville thinks they are."

Morgan, Rapinoe, and the rest of the USWNT took the 2-1 win over England and enjoyed a dominant 2-0 victory against the Netherlands in the final to earn their fourth World Cup. Now, Vlatko Andonovski's team will shift its focus to winning gold at the Olympics for the first time since 2012.

"One Life" dropped Tuesday and is available for purchase through most major booksellers, including Amazon and Barnes & Noble.