For a team that has not won a game from its six played outside Melbourne this season, the travel scenario for the teetering Magpies could scarcely be more challenging: games in Western Australia and Tasmania in less than six days.

With Perth Arena hosting Fleetwood Mac rather than Super Netball over the weekend, the round 12 clash between the out-of-contention Fever and the fifth-placed Magpies has been scheduled as 2019's only Monday night fixture. 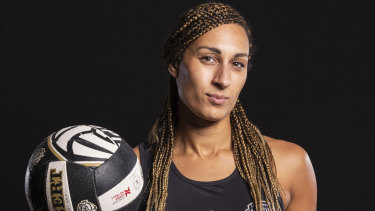 Geva Mentor’s Magpies have a less than ideal schedule this week.Credit:AAP

Thus, the Magpies will arrive home late on Tuesday, and on Friday fly to Launceston for their "home" game against the ladder-leading NSW Swifts – a short turnaround that co-captain Geva Mentor has described as "ridiculous".

"I think we probably raised awareness [with the league] that it's not ideal, but there's nothing that you can do," she said. "We've just got to suck it up and get on with it, and no excuses really."

The Magpies are six points adrift of the Giants, but could displace them in the four with a strong performance in Perth. The remaining finals vacancy may not be decided until the last round, with the Giants at home to the Fever after an away game against the Thunderbirds, while Collingwood "host" the Vixens on their joint home court.

Melbourne Arena is also the scene of the Pies' only four wins this year, and Mentor is at a loss to explain her team's failure to fire on the road.

"It's really bizarre, because all the teams I've been with before we seemed to travel really well," she said. "I'd almost say that it's not that we don't travel well; it's just literally our performances on the day that let us down.

"It's all [within] ourselves, and just being slower out of the blocks. So whether it's mentally we're not switched on, I don't know, but it's also just letting things get on top of us rather than just actually slowing it down, taking a breath, knowing what we're there for … Probably the opposition that we're coming up against have done their homework on us, and we probably don't adapt quick enough.

"The main thing for us is that it's actually down to what we do on court, and our connection with each other and treasuring the ball – as simple as that. And whether we're home or away I think it's the same points that are unfortunately letting us down."

While acknowledging the potential cost of last Sunday's draw against the lowly Thunderbirds in Adelaide, Mentor is remaining optimistic as she prepares for yet another personal duel with the league's leading goal-scorer Jhaniele Fowler.

"I definitely think it makes it extremely difficult, but who knows," she said of the result against the T-birds. "With still two more rounds to go, anything can happen. All we can really do is take care of what's ahead of us and that's that first game in Perth.

"This weekend is obviously very important for us in terms of keeping our finals hopes alive, and the important thing is that it still in our hands. I think our main focus is just on what brand of netball we want to put out there and making sure that if we are going to be in finals contention that we're actually putting netball out there that deserves to be in the finals."

The top three are entrenched, but now separated by 10 points after the Swifts' seven-point haul against the disappointing Vixens. The latter host the in-form Lightning on Sunday at Melbourne Arena in the standout game of the penultimate round.