About 11,500 tickets will be available for games at Globe Life Field in Arlington, Texas. M.L.B. did not get approval to sell tickets to the A.L.C.S., which will be in California. 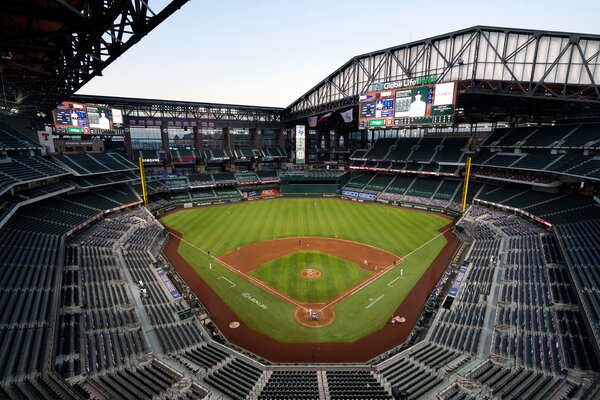 After months of having players compete before cardboard cutouts and empty seats because of the coronavirus pandemic, Major League Baseball announced on Wednesday that it would sell tickets to the National League Championship Series and the World Series this October.

Both series will be held at the Texas Rangers’ new retractable-roof ballpark, Globe Life Field, in Arlington. The league said it would make about 11,500 tickets available per game, with 10,550 fans spread out through the stands and another 950 in suites. Tickets will go on sale on Tuesday through the league’s website.

Globe Life Field — which sits beside the Dallas Cowboys’ AT&T Stadium — seats 40,300 fans and will be the first neutral site in World Series history. The Cowboys’ stadium seats 100,000 and drew 21,708 fans for the team’s home opener on Sept. 20.

The percentage of fans at the N.L.C.S., which begins Oct. 12, and the World Series, which starts Oct. 20, would be a bit higher than the percentage allowed to see the Cowboys. The 11,500 tickets represents 28.5 percent of Globe Life Field’s capacity.

The Rangers — who have held high school graduation ceremonies at the stadium — coordinated a plan with Gov. Greg Abbott’s office and the City of Arlington, and M.L.B. eagerly approved it.

The league is not selling tickets to games for the division series, which are being held in Houston and Arlington for the National League and in Los Angeles and San Diego for the American League. The A.L. Championship Series will be played in San Diego, but the league could not get approval from California to sell tickets there.

The access rules will be strict in Arlington, with fans allowed to buy only one group of four adjoining seats per game. All seating groups — the league is calling them “pods” — will be at least six feet apart, and at least 20 feet away from the field, dugout or bullpen; that is, anywhere a player might be.

Fans cannot transfer tickets and must wear masks at all times, except when eating or drinking at their seats. The league also said it would have hand-sanitizing stations throughout the stadium.