LEWIS HAMILTON clinched his record-equalling seventh world title by putting in a vintage performance to win the Turkish Grand Prix.

It was win 94 in his glorious F1 career and yet another master class. 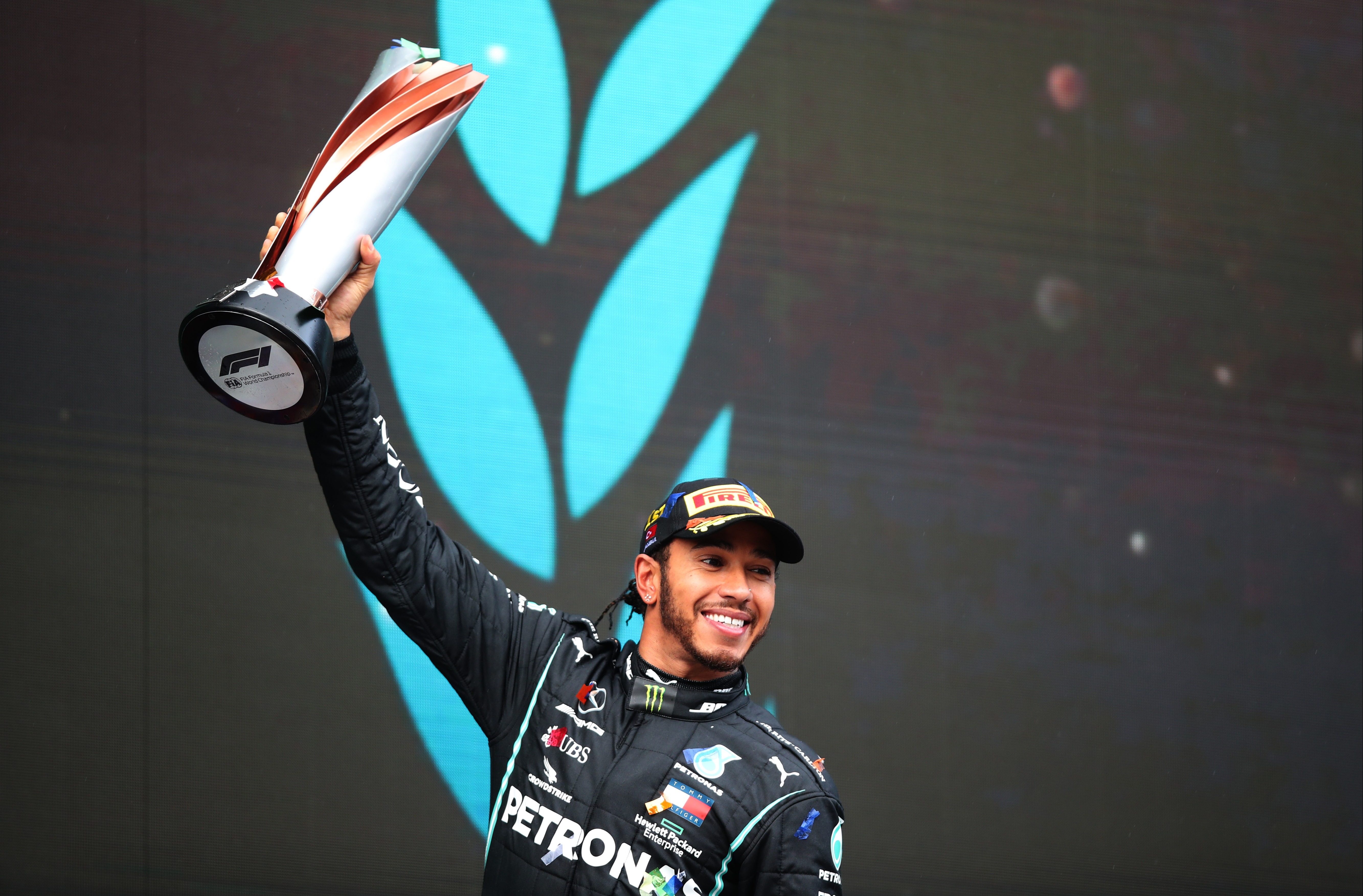 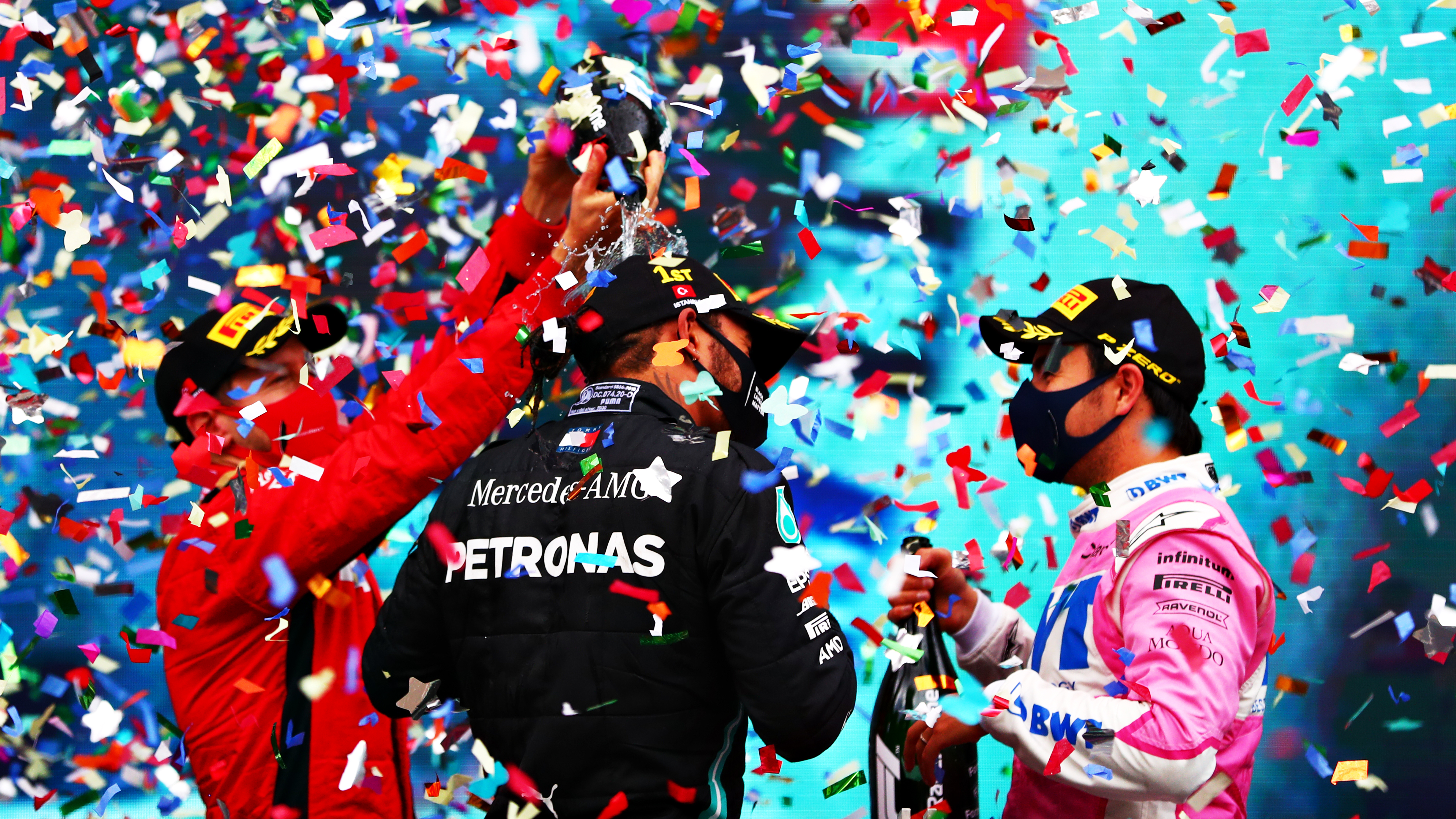 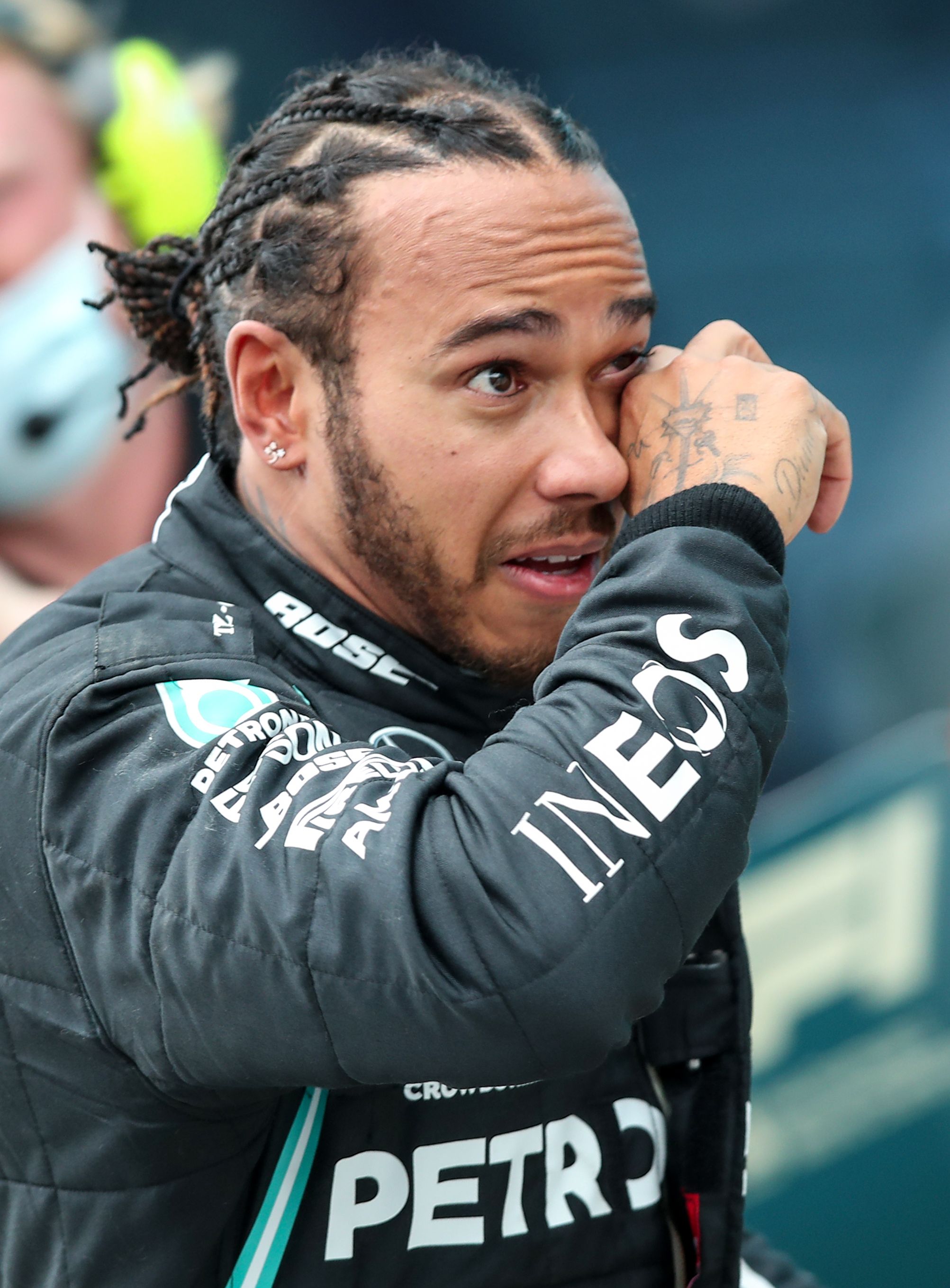 With his only rival, Valtteri Bottas sinking like a stone after so many spins that he was probably left dizzy, Hamilton didn't even need to complete this race.

But if there is one thing we have learnt about the 35-year-old during his career is that he doesn't do things the easy way.

Instead of coasting home, he thumped on the accelerator and thumped the brake pedal as if his life depended on it.

And in treacherous conditions too. He battled his way through the field, taking heart-in-the-mouth risks, to cross the line 31.6 seconds ahead of Sergio Perez in second place. 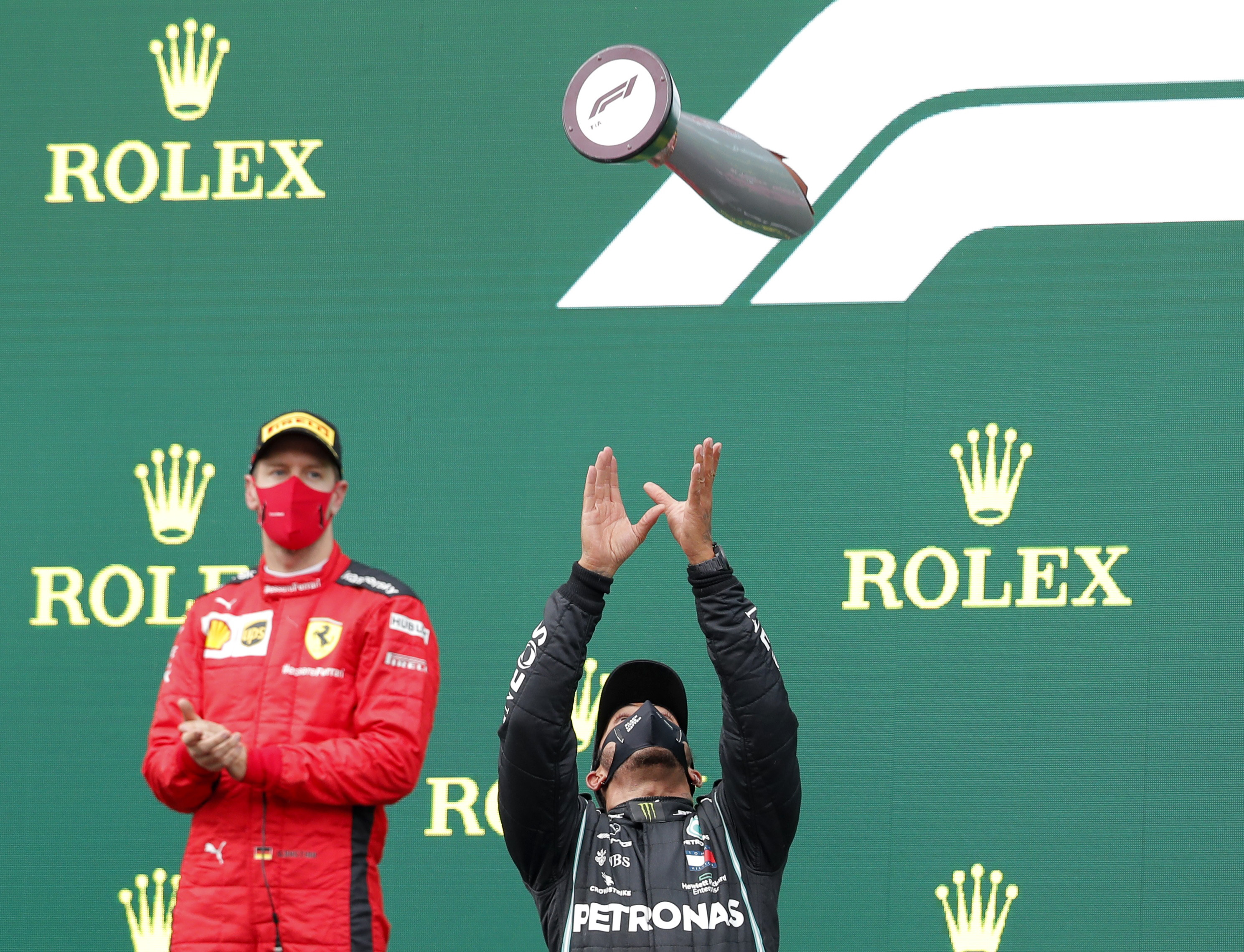 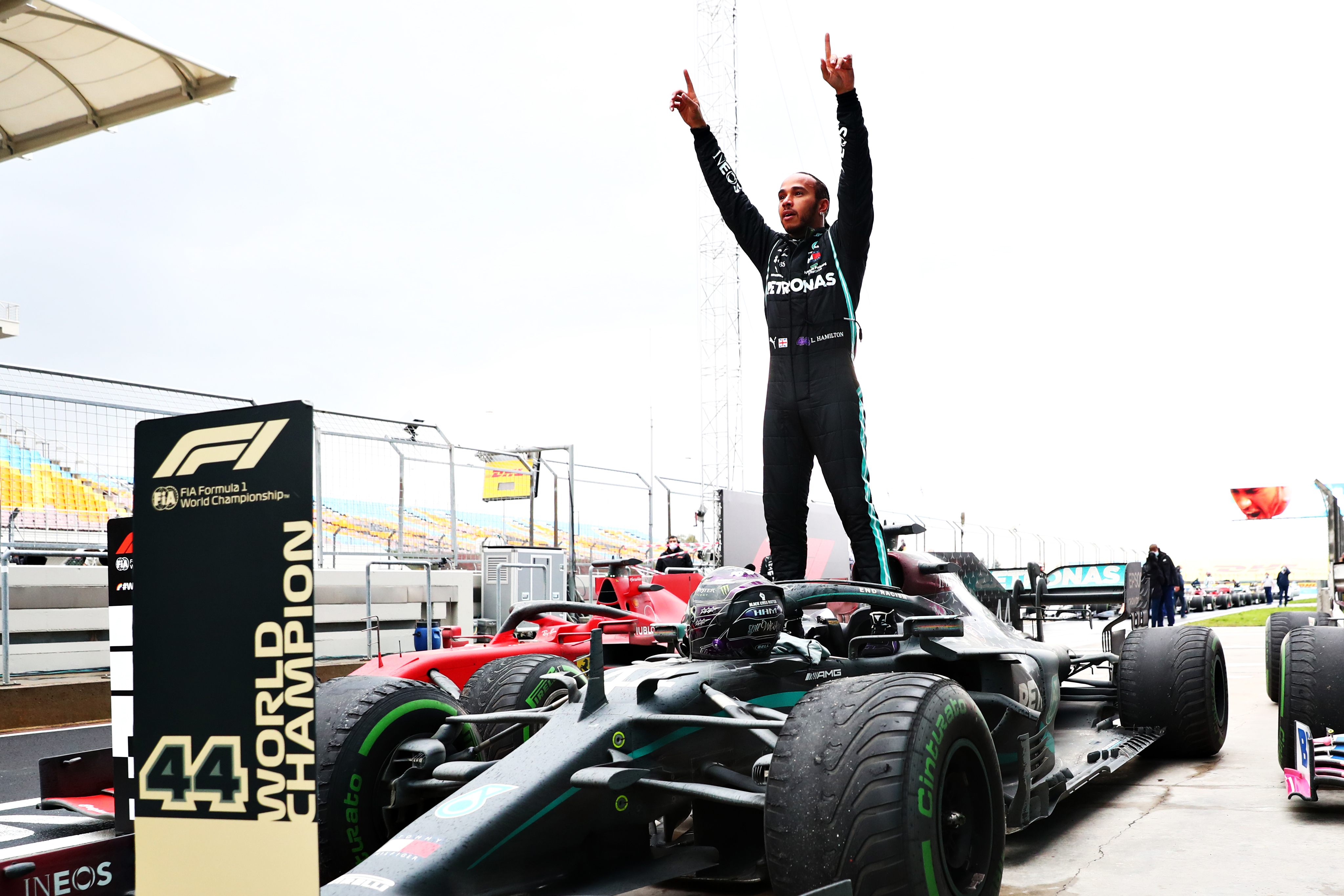 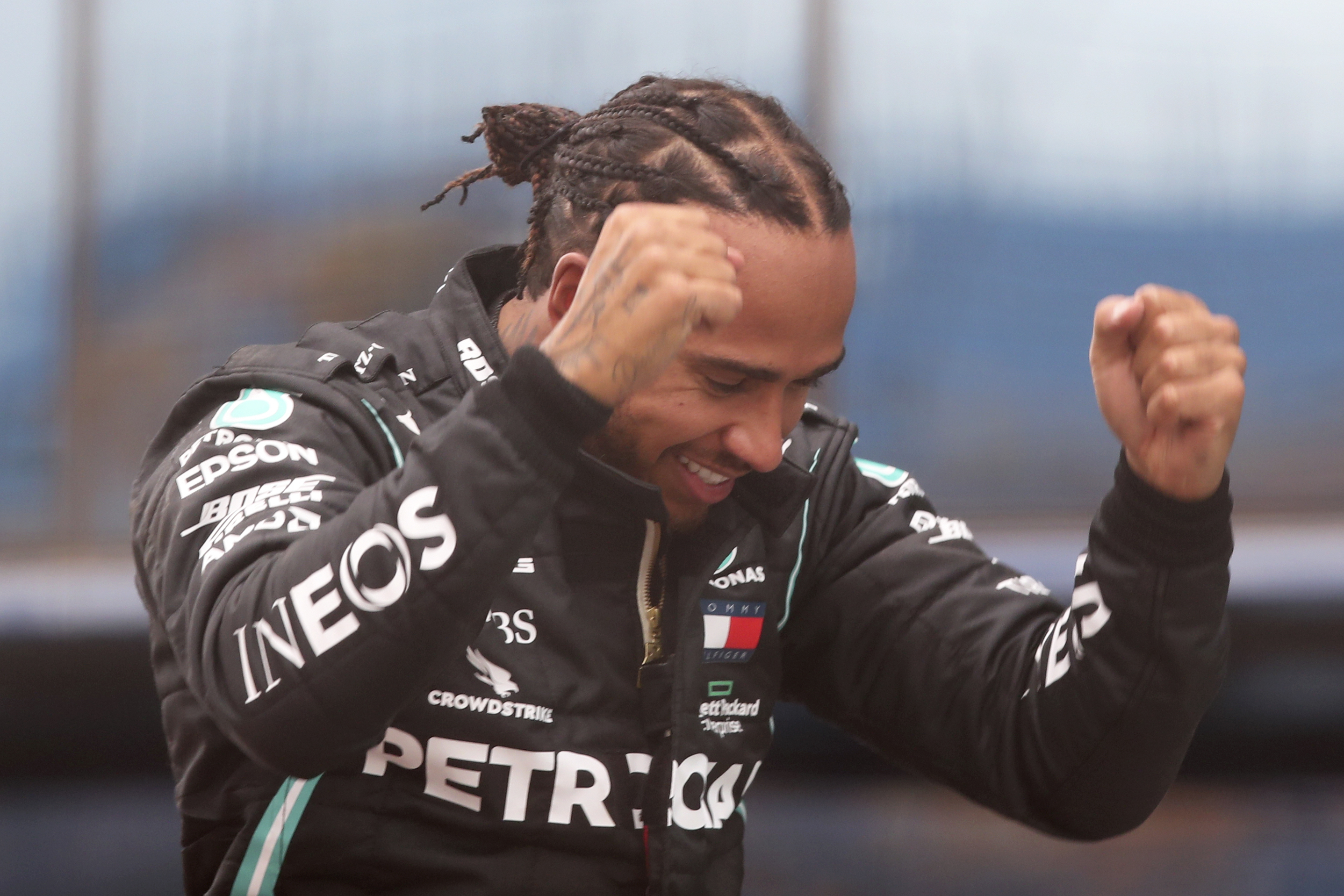 There is an argument that he wins because he has the best car. At this race, with conditions a real leveller, the best driver won.

It is as simple as that.

Before the race, there were some worried faces as the dark clouds gathered over the Istanbul Park circuit and the heavens opened.

The rain had caused havoc the previous day to result in an unlikely first pole position for Lance Stroll. 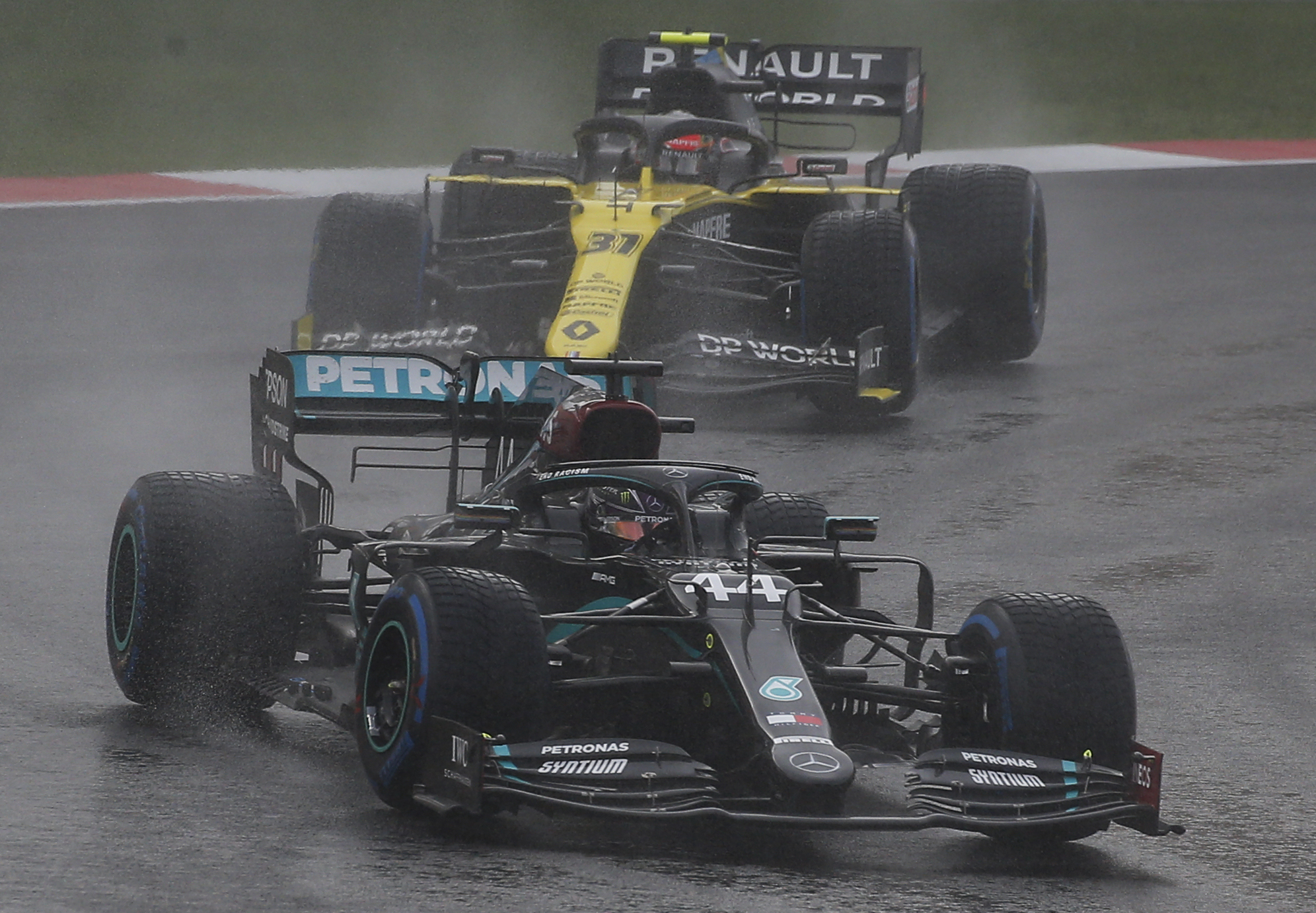 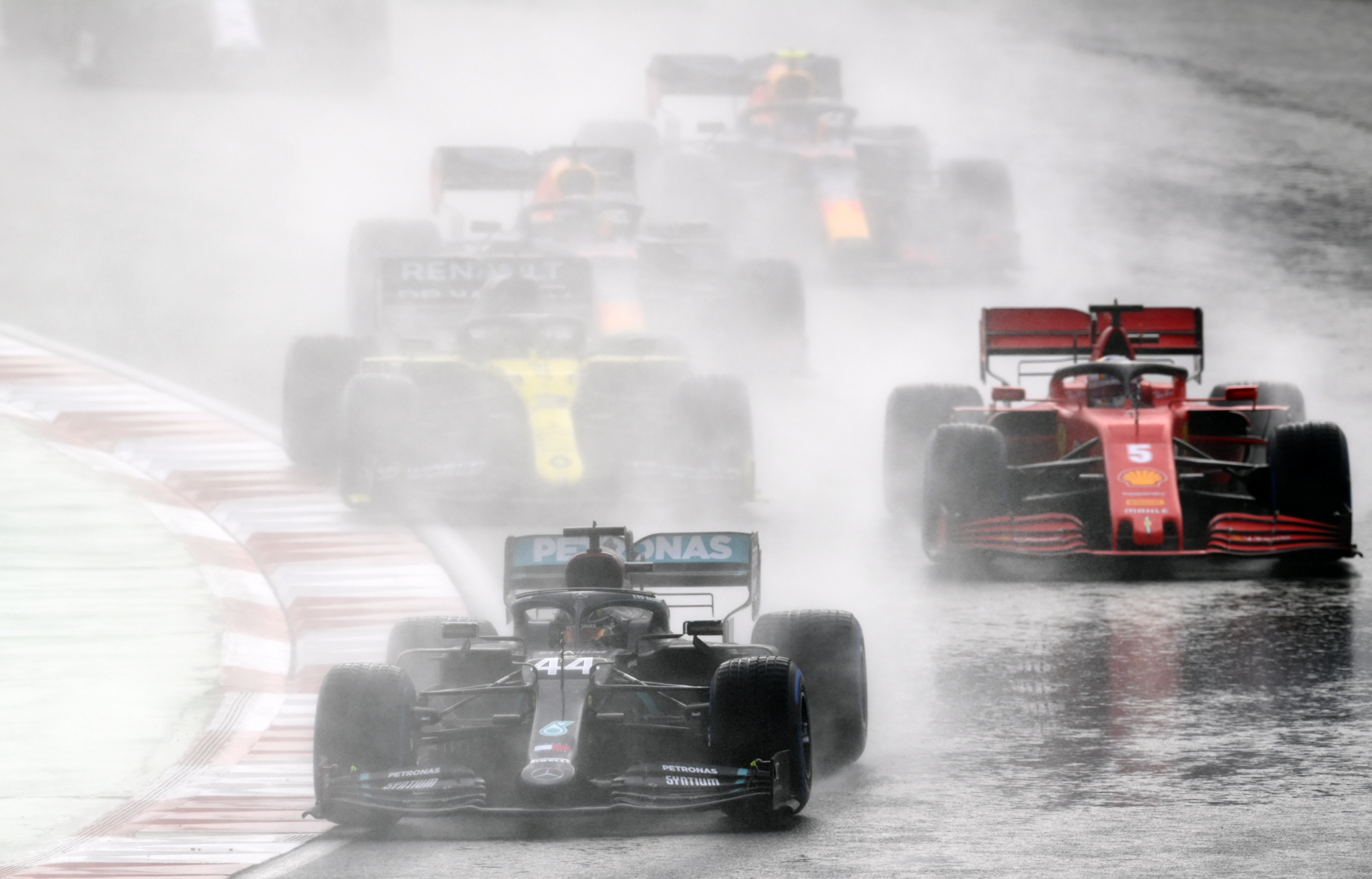 But there was one man who looked an oasis of calm, despite what was at stake as Hamilton stuck to his usual pre-race routine.

The rain continued to fall and caused some spins on the way to the grid as Antonio Giovinazzi and George Russell both found the barriers before limping back to the start.

As for the start itself, it was like these 1,000bhp cars were stuck in treacle as they sluggishly pulled away from the line.

It was like being at your local rink watching people take to the ice for the first time taking pigeon steps as they tried to get their balance.

Max Verstappen, pent up having missed out on pole the previous day, barely moved forward as Hamilton quickly moved from sixth to fourth.

By contrast, Bottas was tagged by Esteban Ocon and sent into the first of many spins for the day.

The Finn was powerless as he slid into a 360 degree spin that dropped him down to 18th.

It was game over from Turn One on Lap one. 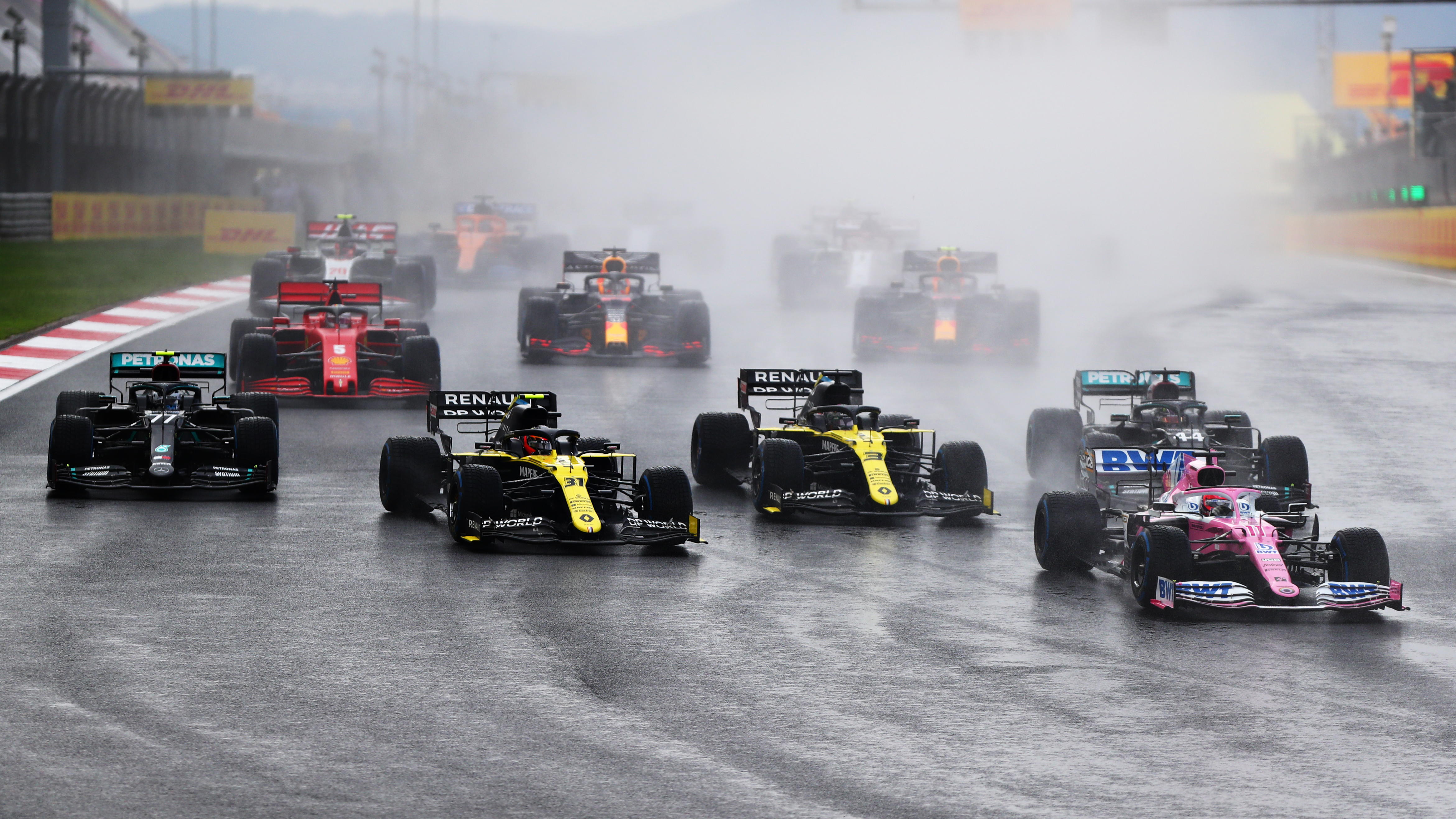 With Hamilton in fourth, he played out a thrilling duel with Sebastian Vettel over a handful of laps, as the German rolled back the years by running in the top three.

When Bottas stopped for intermediate tyres at the end of lap seven, he had hauled himself back to 15th.

But he soon started going backwards again as he spun and slid off track – so much for all that rally experience he did over last winter.

Then it was Hamilton's turn to have a nervy moment.

He bailed out of an attempt to overtake Vettel on Lap 16 and ran wide, allowing Alex Albon to pass, dropping Hamilton down a place.

Out in front, Stroll was being caught by Sergio Perez and Verstappen until the Dutchman proved a little too keen and sent into a terrifying spin at 200mph.

Somehow, he managed to keep on the blackstuff and avoided contact with the barriers.

However, he flat-spotted his tyres and needed to make a pitstop and when he rejoined the track, he slid across the pit exit line, that could trigger a later penalty.

Another two spins for Bottas dropped him further back as Hamilton kept things clean, despite keeping up the pace.

It was like when the TV cameras at The Open cut to the engraver writing the name of this year's winner on the Claret Jug. 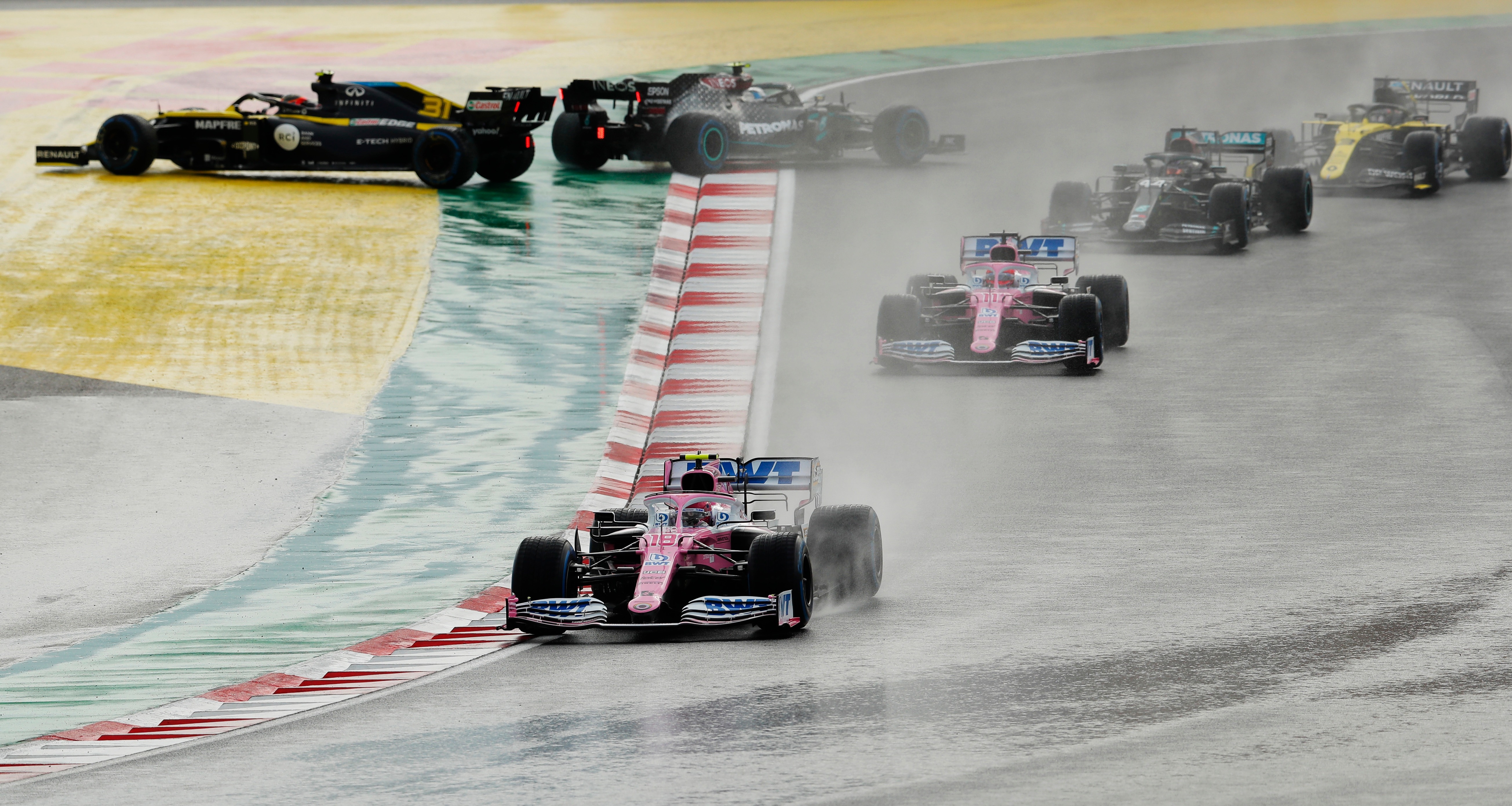 No need for nervousness as Hamilton was handed an unexpected double boost.

A pitstop for Stroll promoted Hamilton to second on lap 36. He was in P1 a lap later after overtaking Perez.

So much for taking it easy.

As for Bottas, he was sent into another THREE SPINS, and with 12 laps to go there was the ultimate indignity, as Hamilton lapped his teammate.

The Finn making life more difficult for the Brit as he refused to move off the racing line.

Bottas, who trundled home in 14th place, was left wondering – like others before him – if he will ever get the better of his teammate.

On being told he had four laps to go, the dead-pan Bottas replied: "I wish it was less." And who could blame him?

The threat of a rain shower on the final few laps nearly added another twist as Hamilton warned his team that the worn intermediate tyres would not work.

But the rain stayed away as Hamilton crossed the line for a victory he conjured this out of nothing. 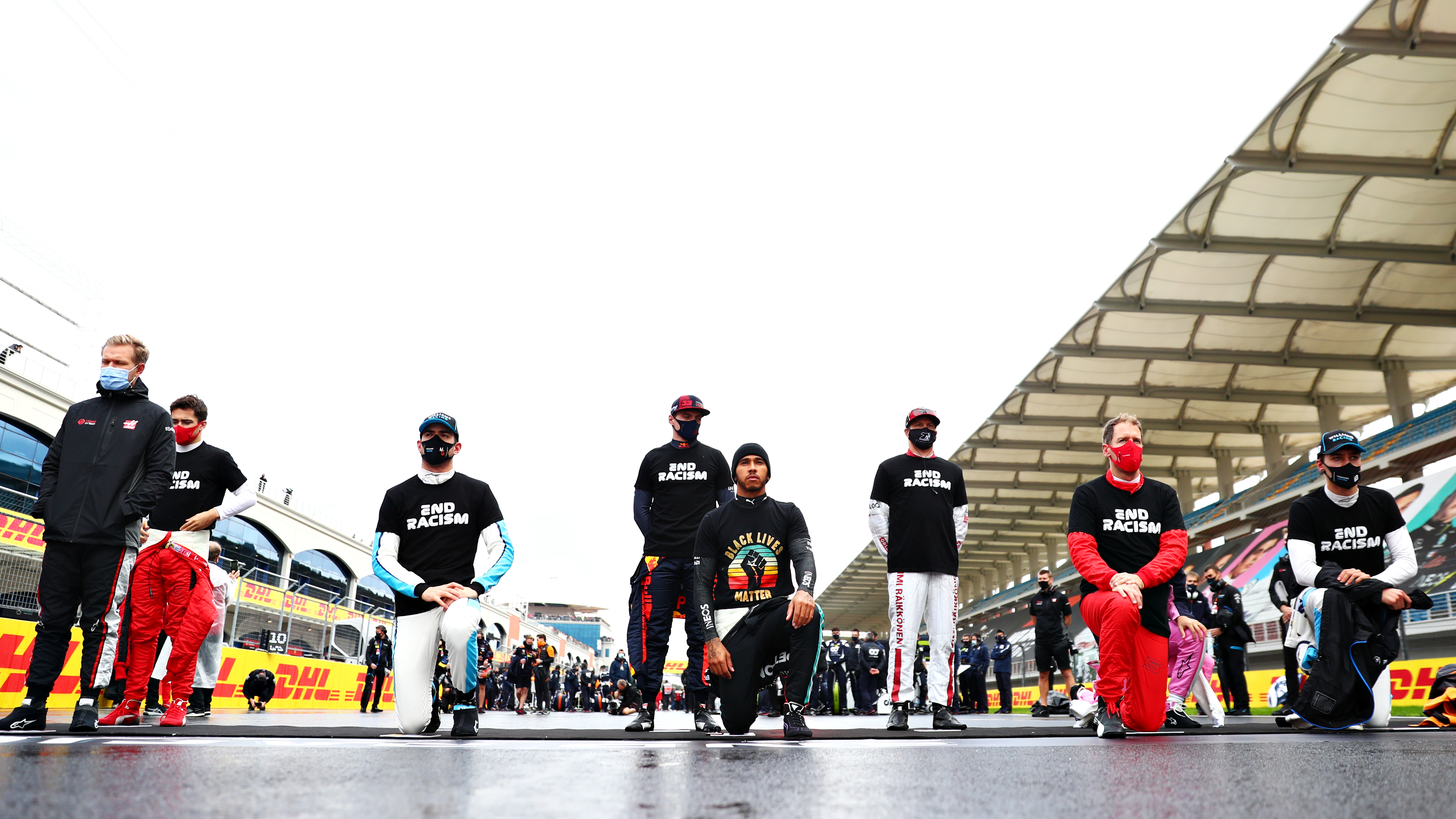