BENJAMIN MENDY has always had something of a rebellious and eccentric streak – but even by his standards this was stretching the point.

For less than a week we have all known Manchester City will spend the summer trying to fill record-breaking Sergio Aguero’s boots. 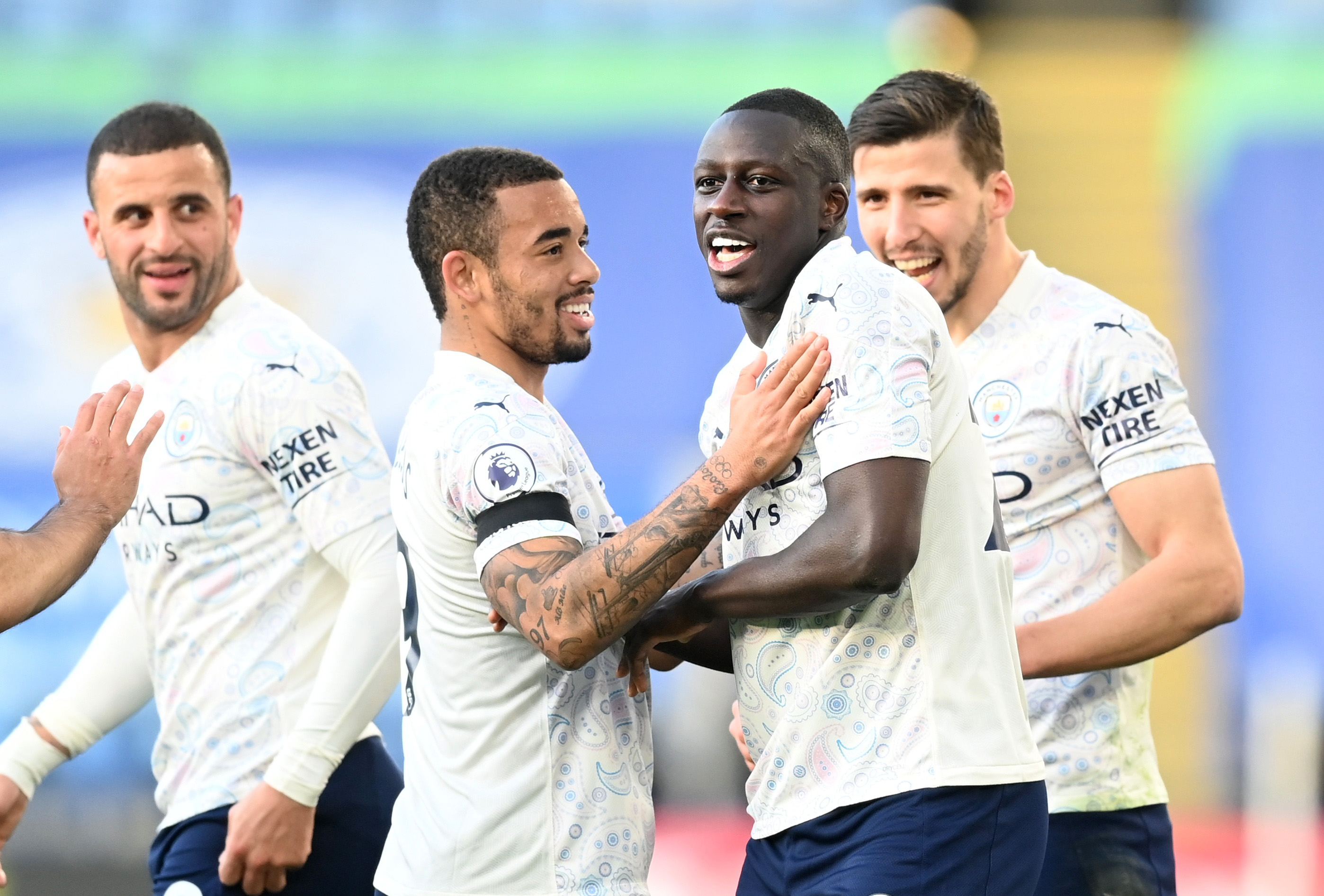 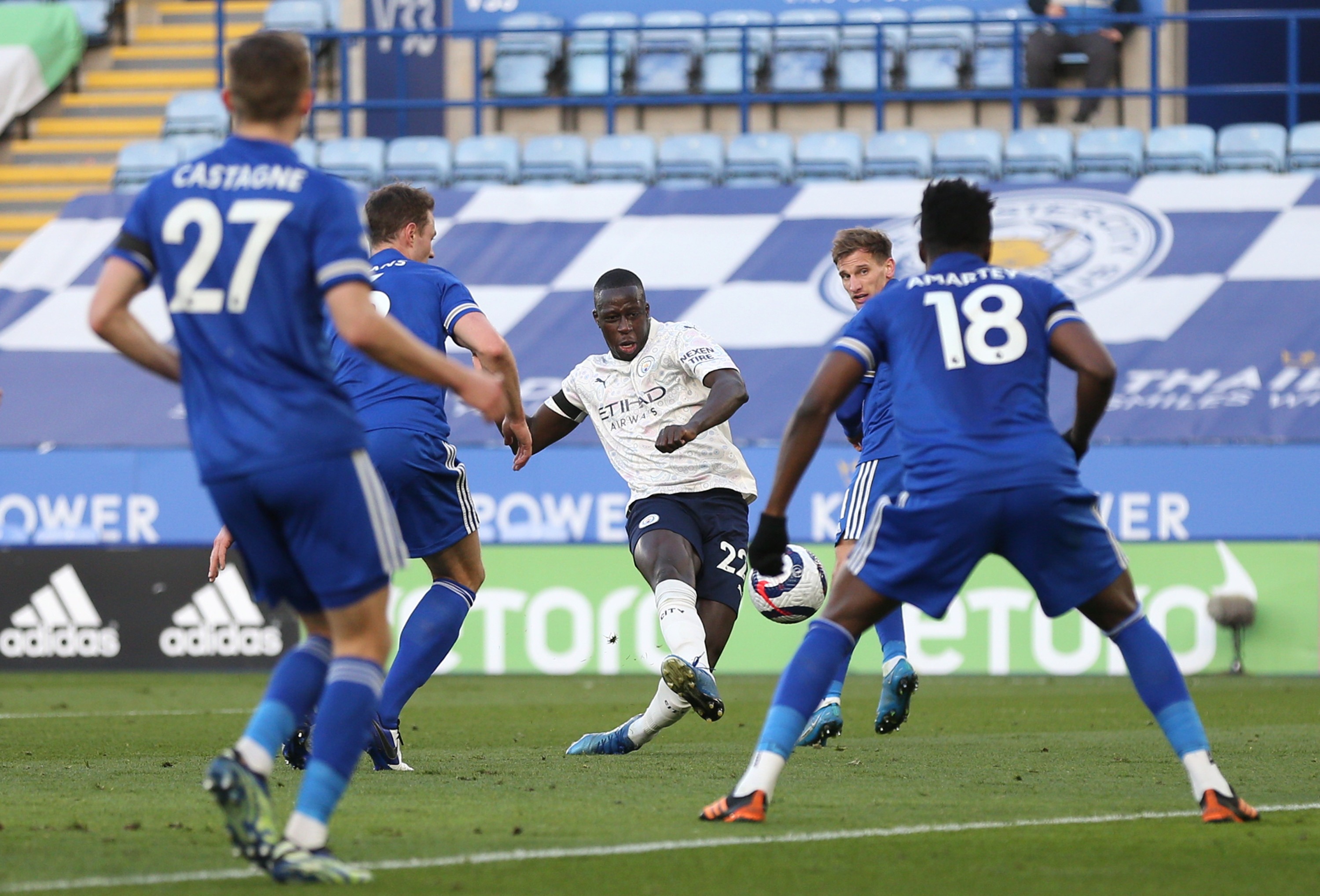 And it didn’t take long for manager Pep Guardiola to insist there is no chance Erling Haaland, Europe’s hottest hitman, will be doing so at the prices being quoted.

But what no-one expected was that Mendy would be the first to throw his hat into the ring as the man to fire the bullets for the soon-to-be-crowned champions next season.

Oh, and if that wasn’t eye-rubbingly amazing enough, with his right foot as well. You know…the one he uses for standing on.

Little more than four months ago this was a man still awaiting his first City goal in nearly four years ago the Etihad.

Well now he’s got two in his last six Premier League games. Or, to put it another way, a better strike ratio than either Aguero or Jamie Vardy right now.

Okay, that last point is going a little too far. But for a man who makes Long John Silver look two-footed, yesterday’s stalemate-smasher deserves its moment in the spotlight.

In fairness, City had bossed this from the off to the extent you half expect a towel to come floating on from the Foxes bench at times.

But with nearly an hour gone, it was still goalless, Leicester were showing signs that they might just fancy stunning Pep Guardiola again, and the title guarantee would stay 14 points away.

Yet after one more relentless City raid, this time there was indeed a route to goal – even though the source was the most unlikely of all.

When Rodrigo delivered a ball from the right, Youri Tielemans did superbly to acrobatically hook away from Gabriel Jesus. 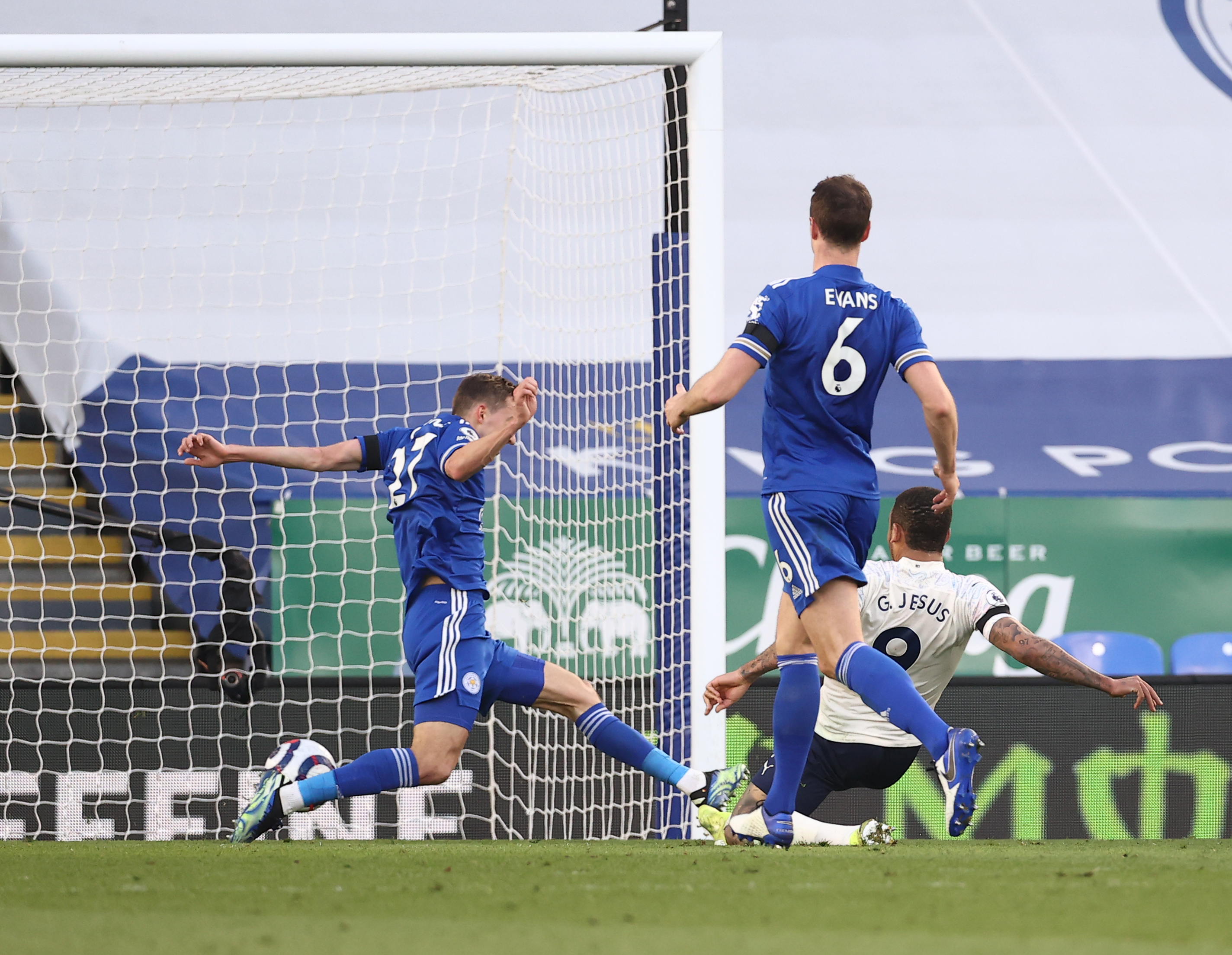 It merely fell to Mendy, who stepped inside Marc Albrighton and then clipped the most clinical of finishes into the far corner.

No wonder manager Guardiola reacted almost like a giggling schoolboy on the touchline. At the edging closer of another Premier League crown of course…but also at the goalscorer.

Okay, City did ensure there would be no late squeaky bum moments when substitute Raheem Sterling teed up Gabriel Jesus for a tap-in that ended any lingering doubts for good.

Yet this was a night that was stolen by Mendy, when everyone really expected it to be the start of Aguero’s grand farewell.

Ironically City’s master blaster was actually the reason his side didn’t go in a goal ahead at the break.

When Wesley Fofana stooped to head away Rodrigo’s delivery, Fernandinho – hardly a dead-eye-dick of a finisher – scudded the rebound into the corner from all of 25 yards.

Kasper Schmeichel never sniffed it, and the strike was so pinpoint, so true, that he probably wouldn’t have got close even if he’d had prior warning.

Yet Aguero had hopped over the ball en route to the goal, the linesman’s flag went up and referee Anthony Taylor ruled it out.

Strictly speaking, of course, it was the correct decision. Them’s the rules, and all that, even if they are laughable at times.

It was a peach of a strike whether anyone was in his eyeline or not, and came to the Foxes’ rescue far better than Schmeichel could have done. 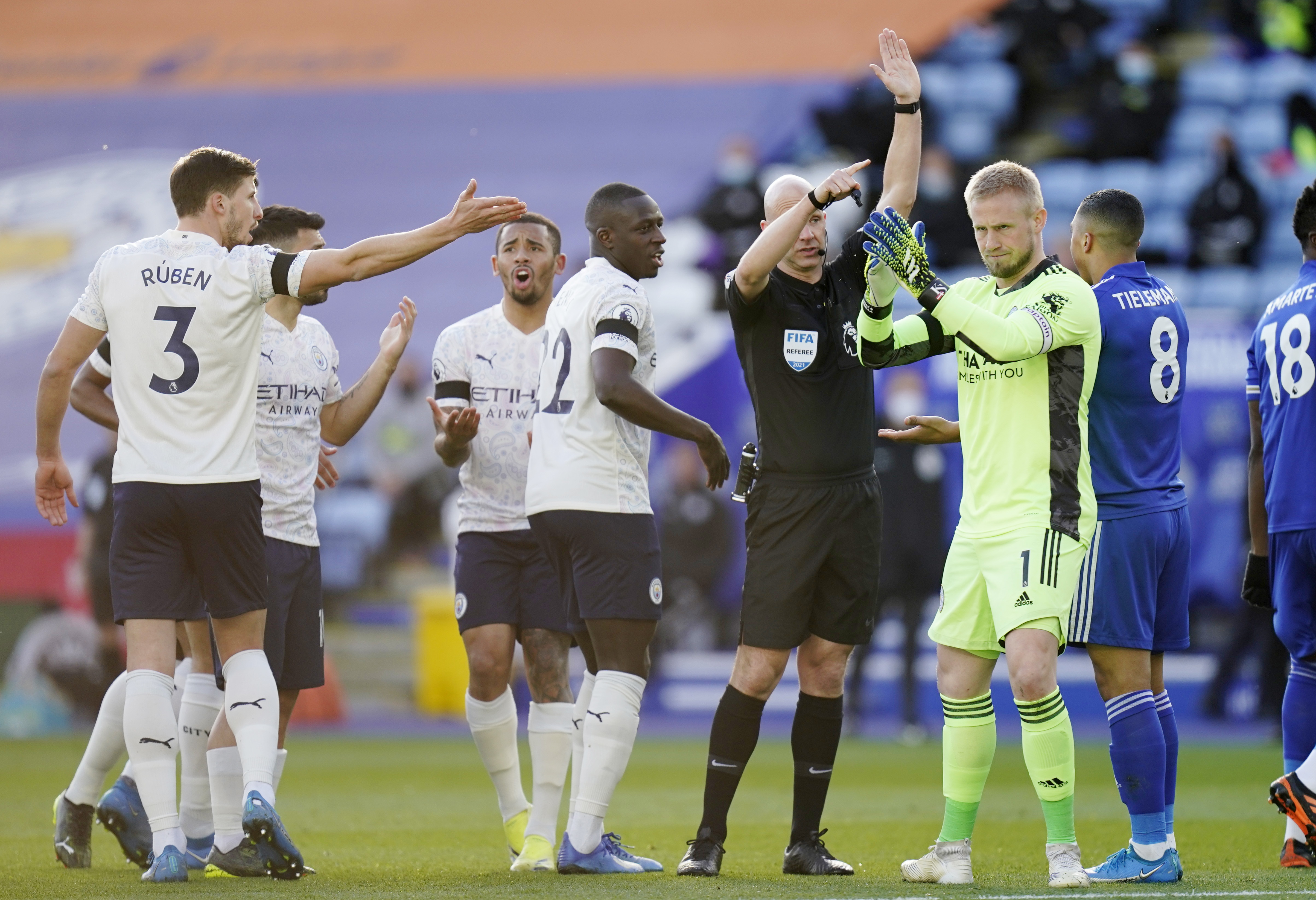 Even then, with barely five minutes on the clock, you never really suspected it would be a moment Guardiola’s Galacticos came to regret.

This was a City side clearly with the bit between their teeth. One intent on getting this title wrapped up as quickly as possible, so they can focus on the other three.

That first half was in danger of turning into a training ground attack versus defence session, for all Leicester were hardly starved of possession.

Aguero himself was the next with a whiff of goal, although his dropping volley-on-the-spin when Mahrez’ block teed him was anything but a gimme.

Kevin Bruyne then rattled the crossbar with a free kick he earned through the most theatrical of collapses, rather than any cynical foul.

Schmeichel blocked a Mahrez shot with his feet, Rodrigo couldn’t deflect one in with his wedding tackle and you did wonder if they would be chances City came to regret.

They may have done had a linesman’s flag not – correctly – denied Vardy a goal, and then a Ruben Dias tackle turned aside another effort.

Yet then Mendy decided it was time to step up and show the strikers how it’s done, following his first City goal in the late November battering of Burnley.

And even though Jesus proved that all those prolific goalscorers on show could, er, score goals after all, by then the show had already been stolen. 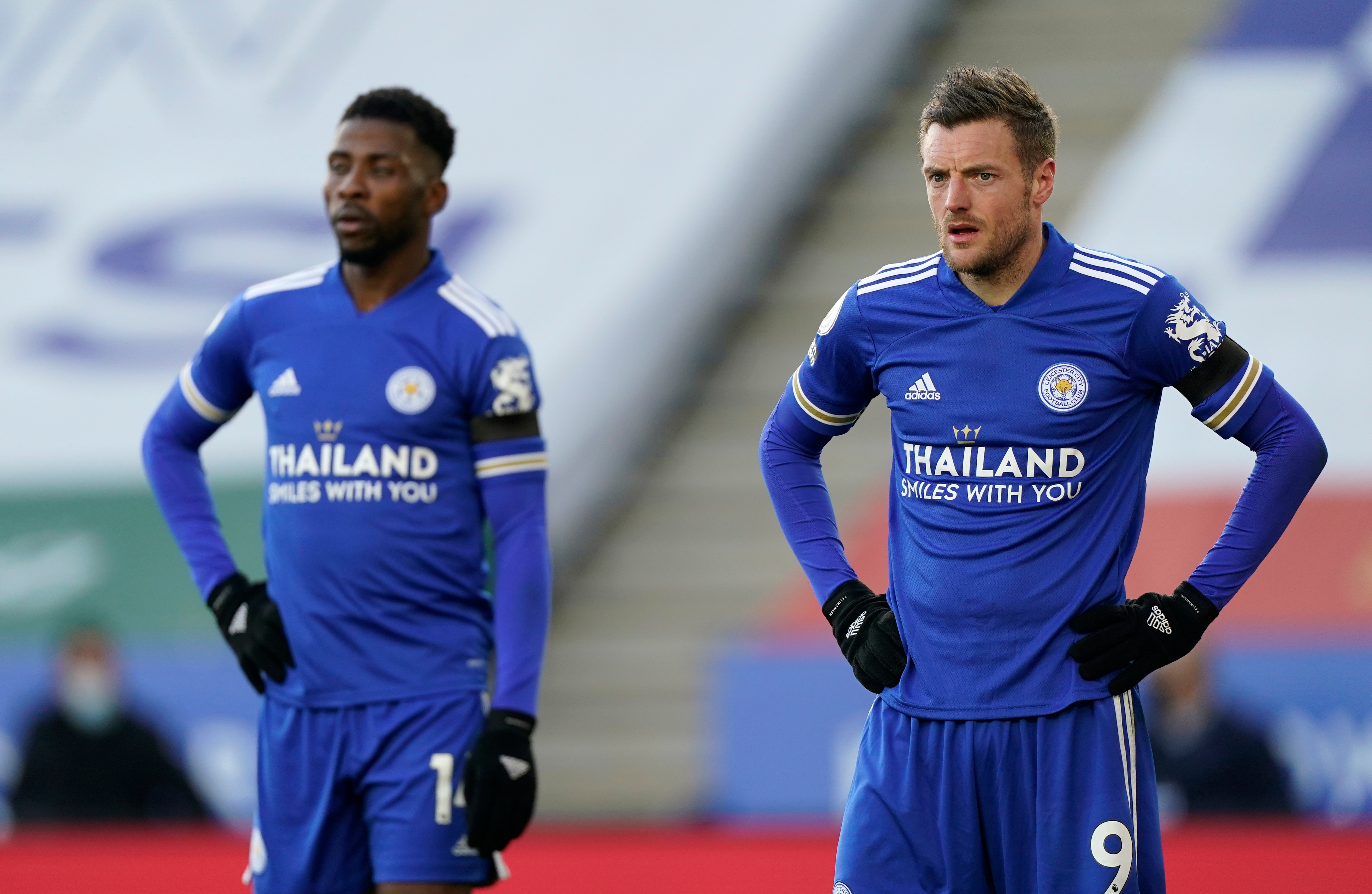