LEICESTER CITY soared to second-place in the table after Jamie Vardy and Harvey Barnes messed with Marcelo Bielsa’s man-marking system.

The Foxes front pair terrorised the Leeds defence and in particular their defensive shadows to bag a goal apiece, while Belgian midfielder Youri Tielemans did his bit with a double. 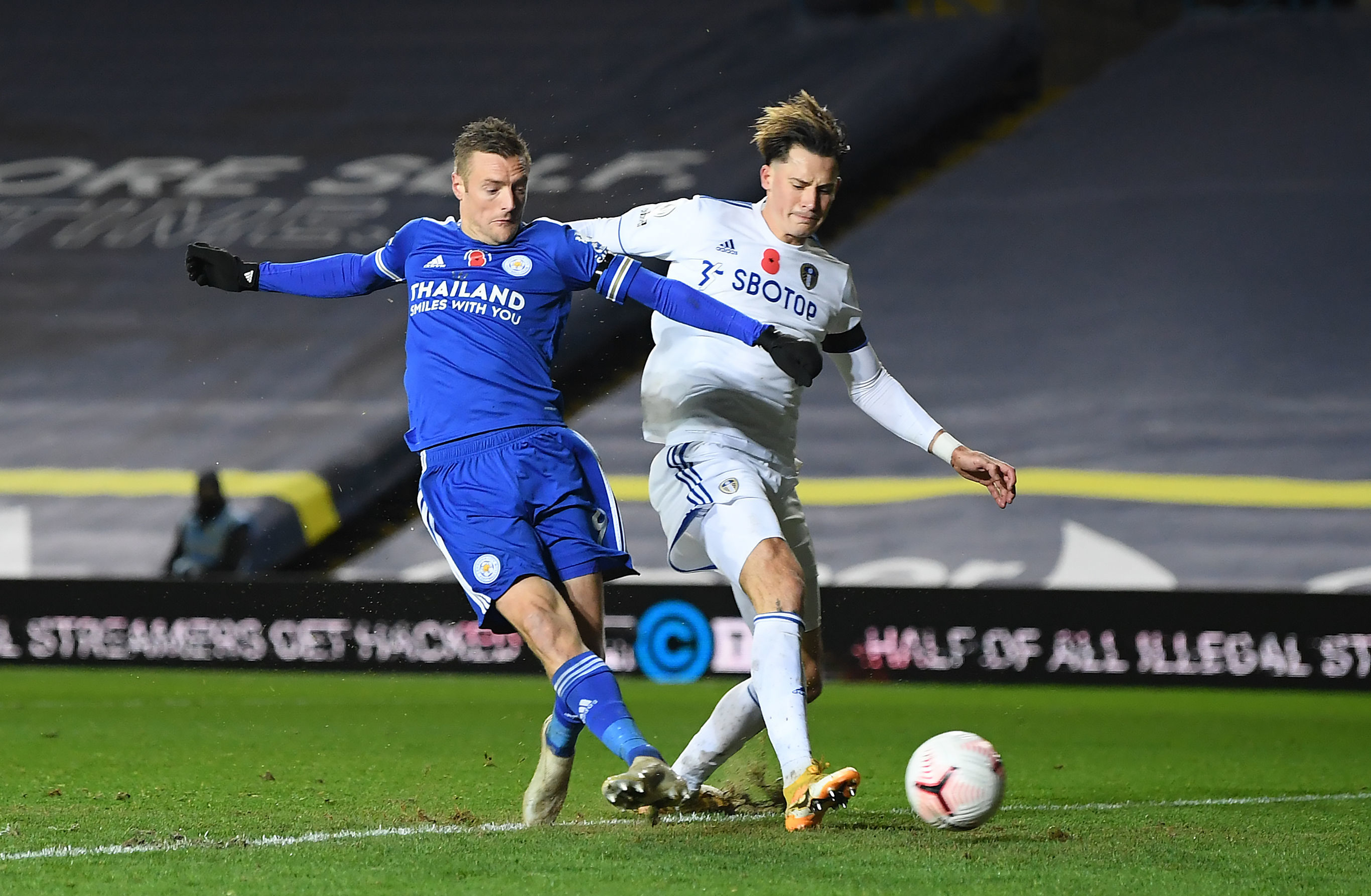 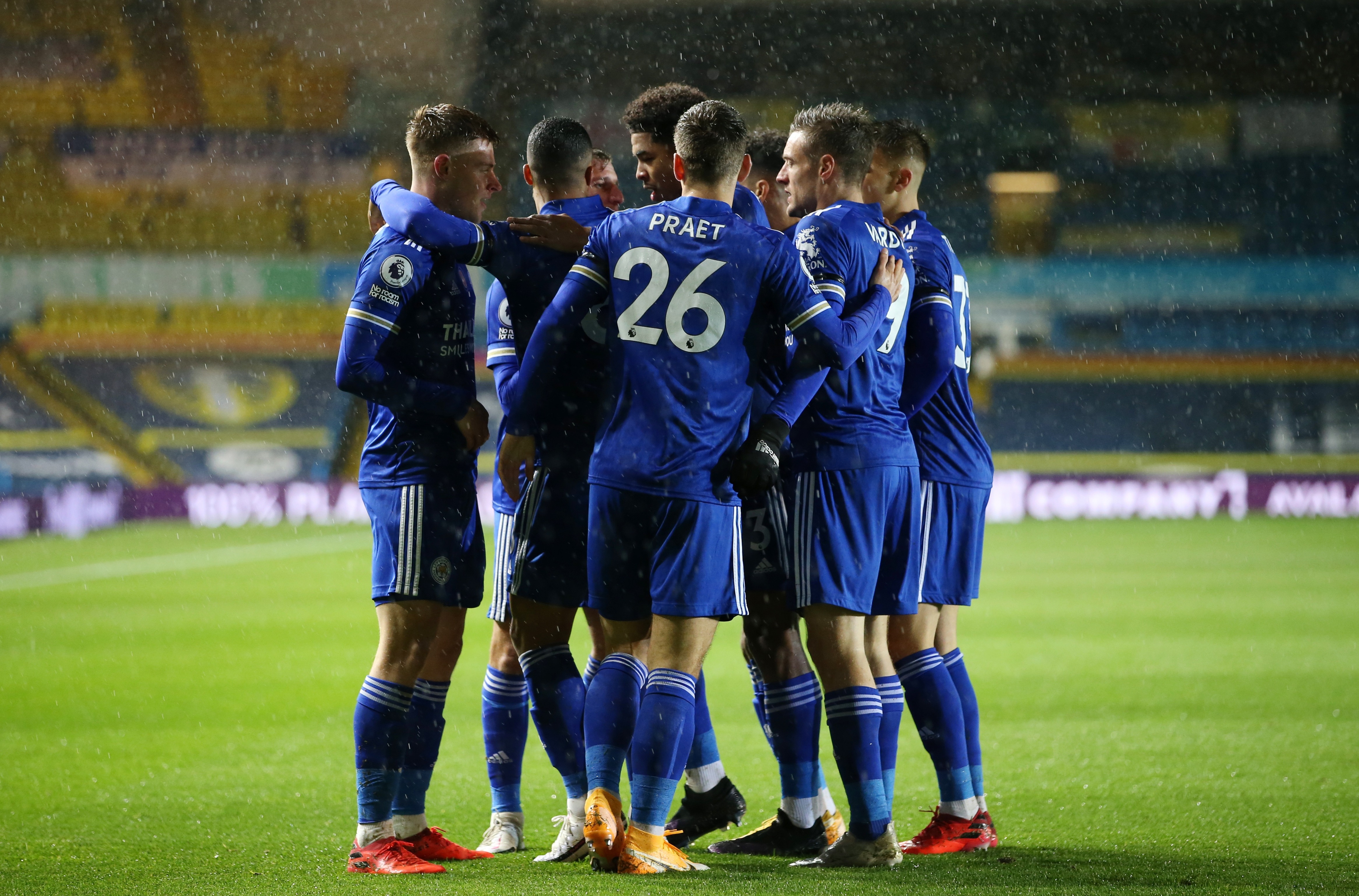 Leeds were left chasing shadows for most of the night and though Stuart Dallas gave them a glimmer of home when he scored shortly after half-time to make it 2-1, Leicester stepped up another gear to win comfortably in the end.

The result meant Rodgers’ Leicester have won five of their first seven top flight games for the first time in their history, despite a growing injury list, to suggest there is real strength in depth at the King Power these days.

On a rain-sodden pitch it only took 121 seconds for Leeds to hit the skids – thanks to one mightily embarrassing Koch-up.

The 33-year-old – described by Brendan Rodgers as the best counter-attacking player in the Premier League – lived up to his billing, pouncing on the gift and rounding Meslier before generously squaring the ball to Harvey Barnes who accepted the simple tap-in.

It was Leicester’s fastest Premier League goal since Shinji Okazaki netted after 52 seconds against Brighton back in August 2017.

Yet 17 seconds earlier it was Leeds who had seemed certain to forge in front – only for in-form striker Patrick Bamford to blow a gilt-edged chance.

Helder Costa’s clipped cross inside the box was nodded into Bamford’s path by Jack Harrison. 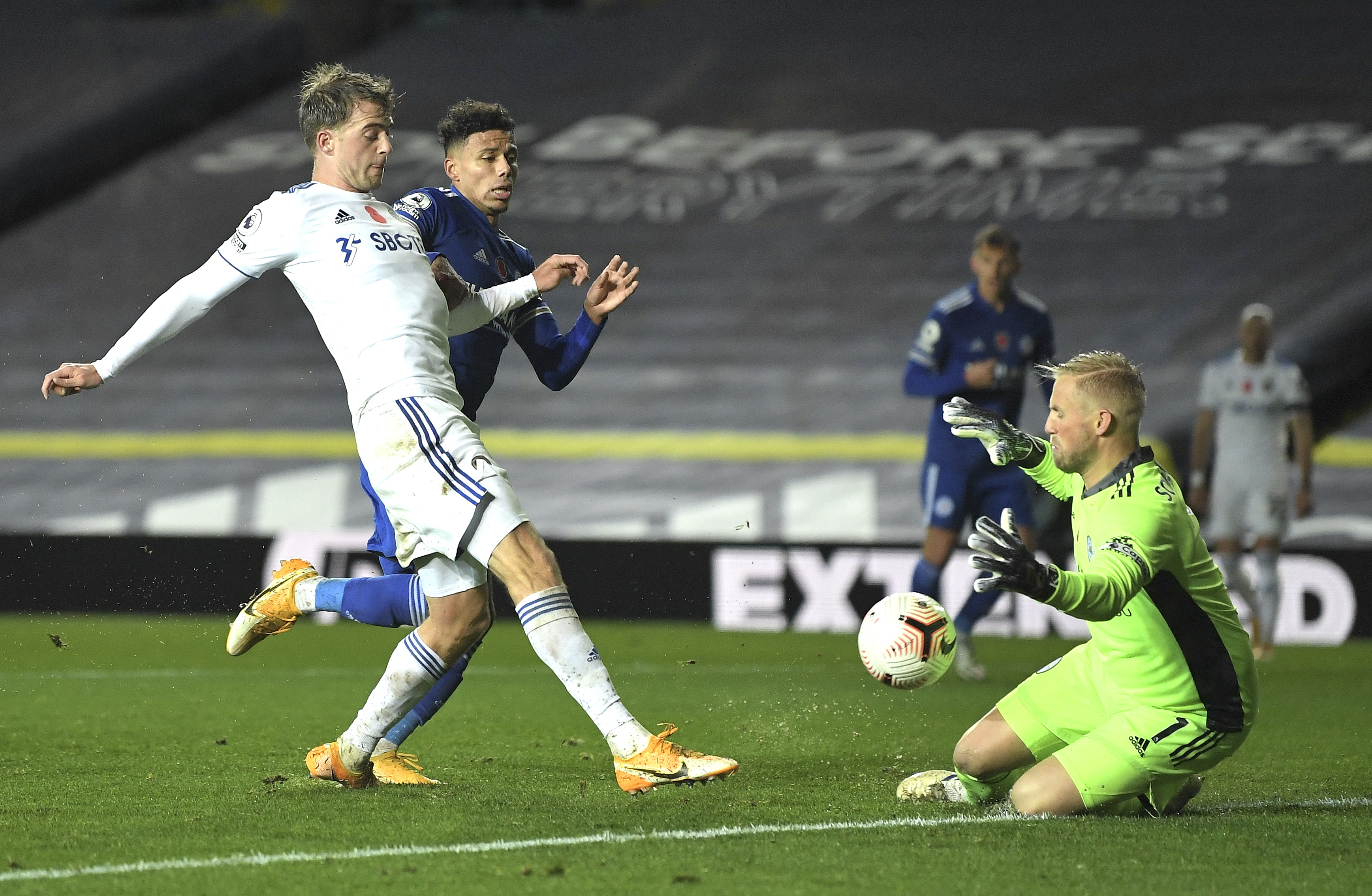 However the red-hot striker got it all wrong and headed the ball into the waiting arms of Kasper Schmeichel from six yards.

Vardy and Barnes were dismantling Leeds’ man-marking system and it took a stunning one-handed save from Meslier to deny Barnes a second goal.

However the French ‘keeper was beaten again after 21 minutes as Leicester ripped Leeds apart again.

Vardy produced a brilliant diving header from a Marc Albrighton cross which Meslier did well to initially stop, but Tielemans was following up to tap home the rebound.

Leeds had another nervous moment when Meslier fumbled an Albrighton cross onto his own post before Bamford’s touch also let him down, allowing Schmeichel to block his shot, when the striker should have scored.

Marcelo Bielsa sent on Ian Poveda for Jamie Shackleton at half-time and within three minutes of the restart Leeds were back in the game as Stuart Dallas scored his first ever Premier League goal. 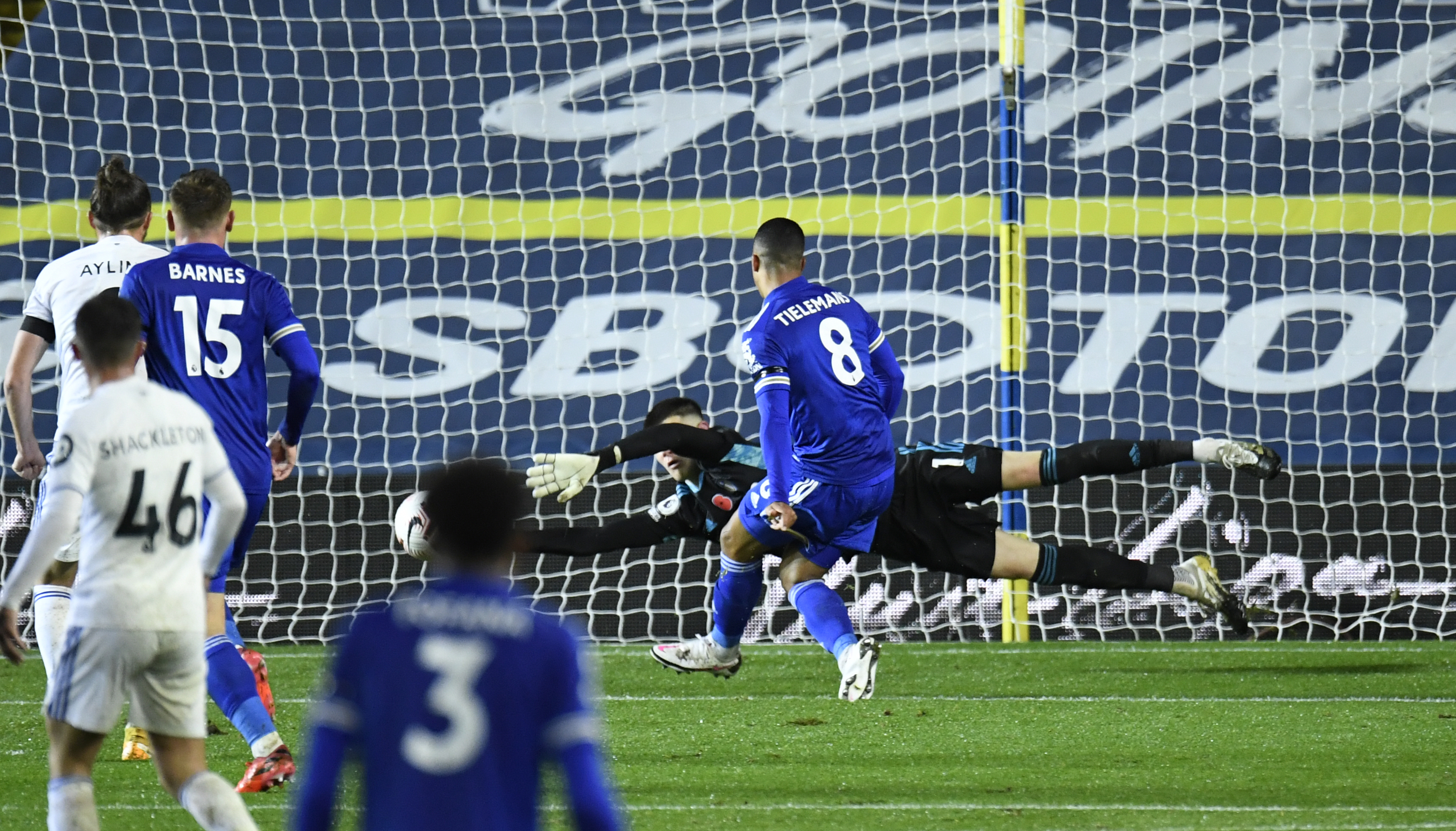 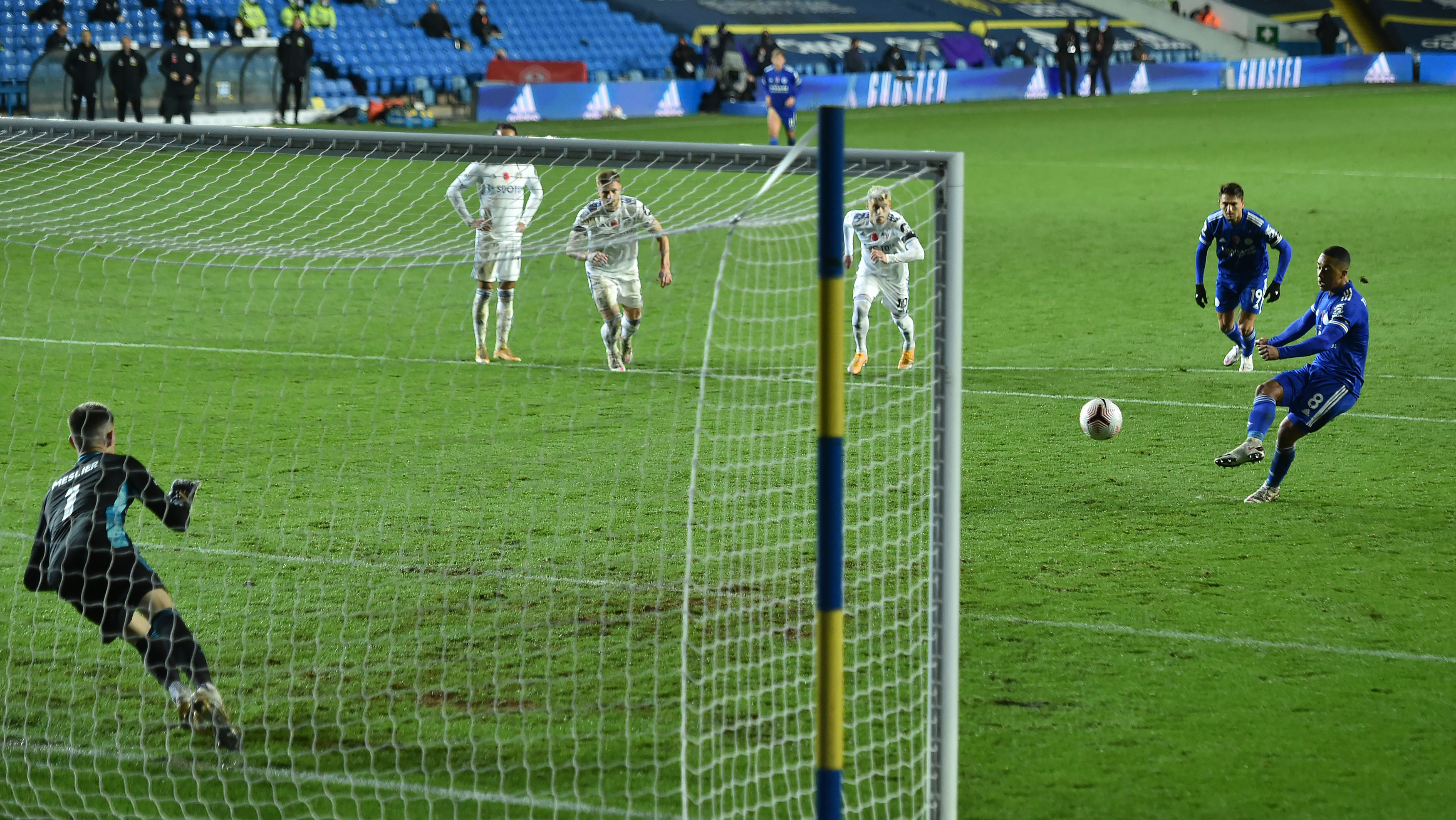 The Northern Irishman accepted a short-corner and swung over a cross which Fuchs failed to reach and the ball sailed into the corner of the Leicester net beyond a helpless Kasper Schmiechel.

Pablo Hernandez thought he had levelled for Leeds but despite beating Schmeichel his curler from 22 yards bounced agonisingly off the corner of post and bar.

However Rodgers turned to his bench for inspiration and it paid off when subs James Maddison and Cengiz Under combined to set up the Foxes third and decisive goal for Vardy.

Maddson threaded the ball to Under and the Turkish international took out Meslier with a clipped centre leaving Vardy the simple task of steering the ball into the gaping net.

Leeds knew they were beaten and their misery was complete when Mateusz Klich downed Maddison at the edge of the box in the 90th minute.

After checking the pitch side screen, Andre Marriner awarded the visitors a penalty, which Tielemans calmly converted to underline Leicester's superiority.