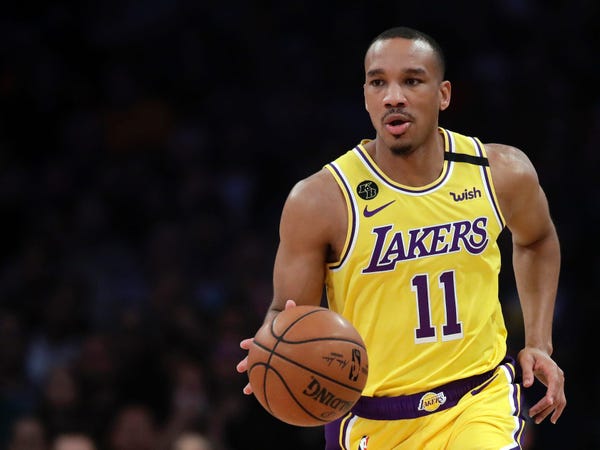 Avery Bradley may not have joined his teammates in Orlando for the NBA restart, but the Los Angeles Lakers star had a huge impact on a different bubble 100 miles southwest.

Bradley's wife, Ashley, suggested that the couple reach out to WNBA leadership to help the league and its players with anything they might need for their "Wubble" located at IMG Academy in Bradenton, Florida. After some initial conversations, the Bradleys spent more than $30,000 of their own money buying supplies geared towards helping the mothers who brought their children onto campus for the 2020 season.

"One thing that was really important was the moms, being able to make sure their essential needs were taken care of," the 10-year NBA vet told Forbes' Shlomo Sprung. "They don't make as much [as NBA players], obviously, and I wanted to see if I could be of service to them to be able to assist in any way I could so they could focus on just basketball."

According to Sprung's reporting, the Bradleys helped provide WNBA moms and their children with playpens, toys, video games and consoles, ping pong tables, books and school supplies, outdoor games, and more. Their contributions helped establish a "children's corner" in the Wubble where kids could play while their moms trained.

"I just wanted to let them know that I care," Bradley said. "It's just about doing the right thing and having us all understand that we're all playing our part to help one another."

Bria Holmes' daughter, Diona or Baby D, became a hit on social media after the Connecticut Sun posted videos of her jamming out and enjoying snacks courtside.

The Bradley family's contributions played a significant role in allowing those women and other parents on campus at IMG Academy to keep their focus not only on basketball but also on addressing some of the larger issues impacting society outside of the Wubble. Before traveling to Bradenton, players resolved to devote their season to demanding justice for Breonna Taylor and other female victims of police brutality and racial injustice. As forward Alysha Clark said after her Seattle Storm completed a three-game sweep of the Las Vegas Aces to win the 2020 WNBA title, "we knew it was much bigger than us and we knew it was much bigger than tonight."

Throughout the season, players wore Breonna Taylor's name on the back of their jerseys while championing various social justice initiatives. They spoke with former Georgia gubernatorial candidate Stacey Abrams and Taylor's mother, Tamika Palmer. They demanded justice for the late Louisville EMT, honored Sandra Bland, and raised awareness for other Black women like them through a partnership with the "Say Her Name" campaign. They protested the shooting of Jacob Blake, encouraged voting and the importance of registering to vote, and endorsed Reverend Raphael Warnock, the opponent of Georgia Senator and Atlanta Dream co-owner Kelly Loeffler.

These initiatives, which prompted Bradley to call the women of the WNBA "role models" who "lead by example" — were made easier by his family's gift.

"Our league can learn a lot from them, and we can help build each other," Bradley told Sprung. "I look up to their leaders. What they're able to stand for helped me be able to make a decision that was important for me and my family as a man, an African-American man, and me understanding how important it is to play that role in society."

Representatives for the WNBA did not immediately respond to Insider's request for comment.