The Arizona Cardinals are the latest team to challenge the “N.F.L. establishment.” They are dangerous subversives with a thrilling dual-threat quarterback and a slick upstart coach whose gimmicky system is all dessert and no vegetables. They may be fun to watch, but conventional wisdom nervously warns that they won’t amount to anything until they grow out of their rebellious phase.

The Cardinals beat the previously undefeated Seattle Seahawks, 37-34, on Sunday night in a chaotic overtime thriller which played out like an overstimulated preschooler’s breathless synopsis of a superhero movie. They humiliated the shame-spiraling Dallas Cowboys, 38-10, the previous Monday night. Those nationally televised victories lifted the Cardinals’ record to 5-2 and heralded their arrival as rising voices in the N.F.L.’s tactical revolution.

Quarterback Kyler Murray is so gifted and unconventional that he makes Lamar Jackson look like a man in a gray flannel suit. Coach Kliff Kingsbury’s offense is full of collegiate spread formations and intricate play designs. By N.F.L. norms and standards, the Cardinals rely too heavily on sandlot gadgetry and took too many risks when building their roster and coaching staff. Yet they are in the thick of the playoff chase just two seasons after bottoming out, at a point when typical rebuilding teams are still losing regularly while their coaches mutter about “changing the culture.”

The Cardinals initially tried to fit in with the squares. After the era of Coach Bruce Arians and quarterback Carson Palmer ran its course, the organization hired Steve Wilks, a long-tenured Carolina Panthers defensive assistant, as its head coach, selected the pocket-passing rookie quarterback Josh Rosen in the 2018 draft and hunkered down for what threatened to be a long, dreary rebuilding cycle.

The 2018 Cardinals were both terrible and dull, with Rosen showing minimal promise while executing archconservative game plans. The team’s 3-13 finish left General Manager Steve Keim with the top pick in the 2019 draft and the choice between pulling the plug on Wilks and Rosen or cautiously squandering the prescribed extra year or two to confirm the many doubts surrounding them.

Keim chose not only to reboot, but also to tune in, drop out and turn on. The Cardinals replaced Wilks with Kingsbury, then a 39-year-old with a losing record as Texas Tech’s head coach and the carefully sculpted beard of a millennial who patronized all the trendiest podcast sponsors. Keim and Kingsbury then traded Rosen and drafted Murray, the 2018 Heisman Trophy winner who started for just one season at Oklahoma, had already signed a minor league baseball contract and stood just over 5-foot-10 if you stretched the measuring tape. 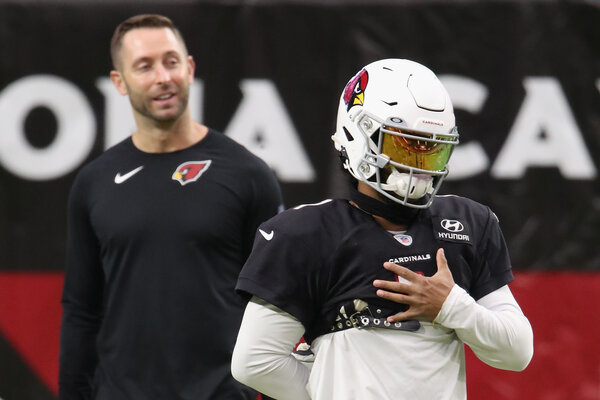 Both moves were daring and dangerous: The Cardinals eschewed a safe rebuilding model for a quarterback who was short, inexperienced and had other career options, and for a coach whose offense was all fins, spoilers and racing stripes but whose crowning achievement to that point was coaching Patrick Mahomes to a 7-6 record in college games.

Fears that Murray would dash back to baseball or shatter after his first sack proved unfounded. Yet it was clear from their 2019 N.F.L. debut — a 27-27 tie against the stodgy, mediocre Detroit Lions — that Kingsbury and Murray would do things differently. Kingsbury deploys four or more wide receivers roughly four times as often as the typical offensive play-caller, and only the Baltimore Ravens’ Jackson executes more designed quarterback runs than Murray, according to Sports Info Solutions. Kingsbury stacks and spreads receivers all over the field and conceals easy short throws beneath layers of misdirection, while Murray dodges defenders and launches rockets like a video game character.

Last season’s results were more entertaining than effective, and the Cardinals finished with a 5-10-1 record. This year’s Cardinals roster is far stronger. Keim pilfered a three-time All-Pro wide receiver, DeAndre Hopkins, via a trade during one of the former Houston Texans generalissimo Bill O’Brien’s fits of self-sabotage; Hopkins leads the N.F.L. in receptions (57) and yards (704).

New superstars are emerging, too, most notably Budda Baker, an undersize ball-hawking defensive back. Meanwhile, the 37-year-old wide receiver Larry Fitzgerald, a holdover from the days when Kurt Warner was the team’s quarterback, grooves along with the vibe like a radical professor at a 1967 Jefferson Airplane concert.

The Cardinals do not appear quite ready to be Super Bowl contenders this season: Their offensive line and defense are still rather shaky, and Murray’s passing remains a little too scattershot. For now, they must settle for wreaking havoc on the playoff picture and leading the N.F.L. in sheer delight. Murray was caught by cameras laughing at Hopkins thriving in man-to-man coverage against Seattle on Sunday night before he lofted a 35-yard touchdown pass. Kingsbury told reporters after the game that he and Murray shared a chuckle on the sideline over how it had unfolded much like in their college days.

In some ways, Kingsbury and Murray are merely following in the footsteps of Mahomes and Andy Reid of the Kansas City Chiefs and Jackson and John Harbaugh of the Ravens by letting their spread-formation, quarterback-option freak flags fly. The Cardinals are nonconformists, just like everybody else. But they also take even greater organizational risks than the more established Chiefs and Ravens: a younger coach, a tinier quarterback, bolder trades, weirder play designs.

The Cardinals are helping to redefine what’s normal in the N.F.L. If they keep winning, the establishment will soon be forced to conform to them, not the other way around.