The supreme shadow Katie Taylor has cast over women’s boxing shows no sign of shrinking. At her peak, the undisputed lightweight champion can be irrepressible and extraordinary and, by all continuing measures of her professional career, almost incapable of defeat. But in truth, she was only required to skim the surface of that talent to outpoint her veteran opponent.

It is no disservice to Jennifer Han, who once held the IBF’s world title, but this was just the 38-year-old’s second fight in the space of three-and-a-half years. Even then, she had never known an opponent of quite the same esteemed calibre as Taylor, who rarely faced any great moments of jeopardy.

Taylor’s truest remaining challenge awaits next year in the form of Amanda Serrano, Puerto Rico’s phenomenal seven-weight champion. It is the most tantalising prospect in women’s boxing, but that still could have been wrecked by the slightest mishap tonight.

In reality, though, that likelihood had always felt illusory. Taylor had heralded Headingley and Leeds, the birthplace of her father, Pete, as a “second home” in the build-up, and while this wasn’t quite a procession, the ascendancy she seized from the opening bell behind her assured jab never weakened.

The first two rounds were comfortable, even a touch tentative, with both fighters content to measure one another’s threat. But then Taylor has always been prone to trading in the pocket, inviting the best of her opponent in pursuit of an opening. They duly began to hold their feet in the centre of the ring in the third round, and Taylor was the clear victor in each exchange, her swift combinations cracking Han’s guard. 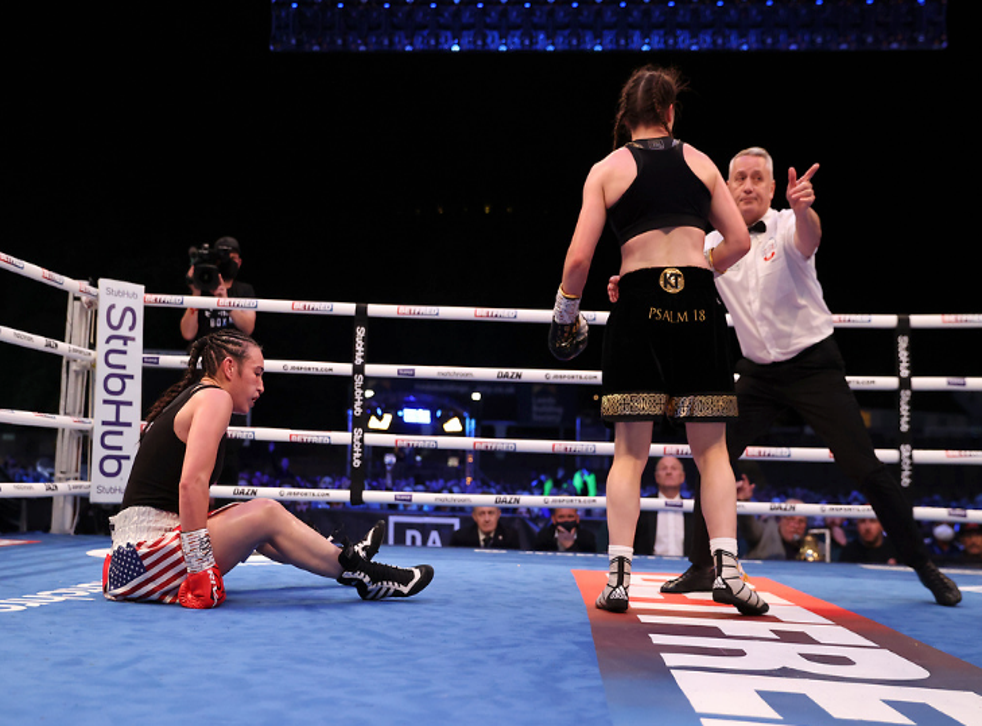 At times, Taylor’s work was guilty of becoming a little scrappy, lunging in behind her left hand, making the space too thin for either fighter to take advantage. Her shots were clearly the more punishing, though, benefiting from her sharper and more varied technique, and in the seventh she finally cracked Han’s defence, with the American taking a standing eight count – even if a slip contributed to her fall.

Galvanised by her breakthrough, Taylor sought to increase the pressure in the eighth, continuing to launch attacks behind her jab, but Han was brave and refused to buckle. The scores, unsurprisingly, were wide and unanimous, with Taylor winning every single round on all three judges’ scorecards. A far greater test will be required to threaten her stronghold over the lightweight division.