Juan-Pablo Montoya will make his comeback to IndyCar – and McLaren – on Friday as the former F1 driver gears up for the showpiece Indianapolis 500 at the end of this month.

Fifteen years after his 18-month stint at their F1 team – and his rollercoaster time in the sport as whole – came to a sudden end, Montoya is back with McLaren’s IndyCar team, Arrow McLaren SP, in a third car for the next two races at the famous Brickyard.

Montoya is joining team regulars Pato O’Ward – IndyCar’s newest race winner – and Felix Rosenqvist for both this weekend’s Indy Grand Prix on the venue’s road course and then the showpiece Indy 500 itself around the famous 2.5-mile oval – which begins with practice and qualifying next week.

The Indy 500 race day is on Sunday, May 30 – live on Sky Sports F1. The practice sessions begin on Tuesday, also live on the channel.

Montoya, now 45 and currently racing in the World Endurance Championship, is returning to Indianapolis for the first time since 2017 in an attempt to win the Indy 500 for the third time.

Effectively taking over the additional car entry that former F1 rival Fernando Alonso drove with McLaren at the 500 last year, Montoya has already driven Arrow McLaren SP’s Chevrolet-powered challenger in open testing for the Indy 500 and will now be in action on Friday and Saturday in the fifth round of the IndyCar season. 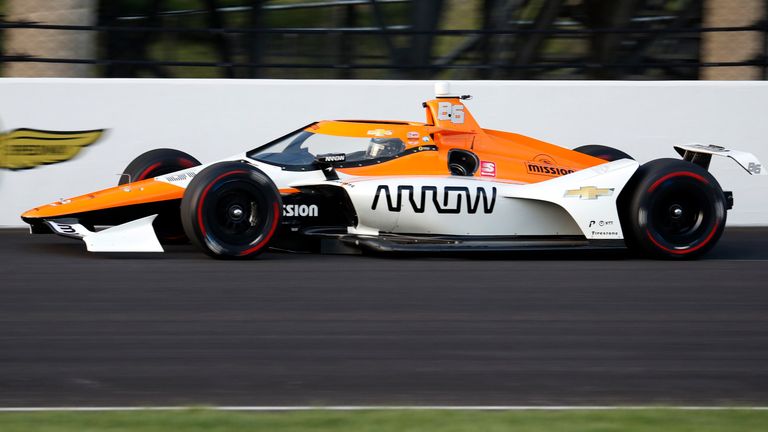 Heard this was a fan favorite. 😍❤️ pic.twitter.com/3JcSuEFtdJ

“Working with McLaren again has been a lot of fun,” the seven-time F1 race winner told the team’s website. “It’s been an interesting experience to work and see some of the people that I’ve worked with before, so that’s been a lot of fun.

“And the opportunity to help Felix and Pato get better has also been a lot of fun. I think they have a lot of speed, but I have a lot of knowledge. Pato’s just come off a win at Texas, so that’s really cool and great momentum on his side.

Round five of the IndyCar season takes place on Friday with practice and qualifying, and then Saturday with the race itself. All the action is live on Sky Sports F1.

Six-time champion Scott Dixon leads the standings again after this season’s opening four rounds, with O’Ward in second place after taking McLaren’s first victory since their full-time return to the series in 2020 last time out in Texas.

Romain Grosjean and Max Chilton, who are competing in the road and street events, are also back in action this weekend. Chilton is also competing in the Indy 500, with 35 drivers to compete for 33 places on the starting grid in qualifying next weekend.