LITTLE did Jamal Lowe know as a starry-eyed kid tweeting about Swansea that he would one day be playing for them.

When the rookie was 17 and turning out for Barnet Under-18s, the Swans had just won promotion to the Premier League. 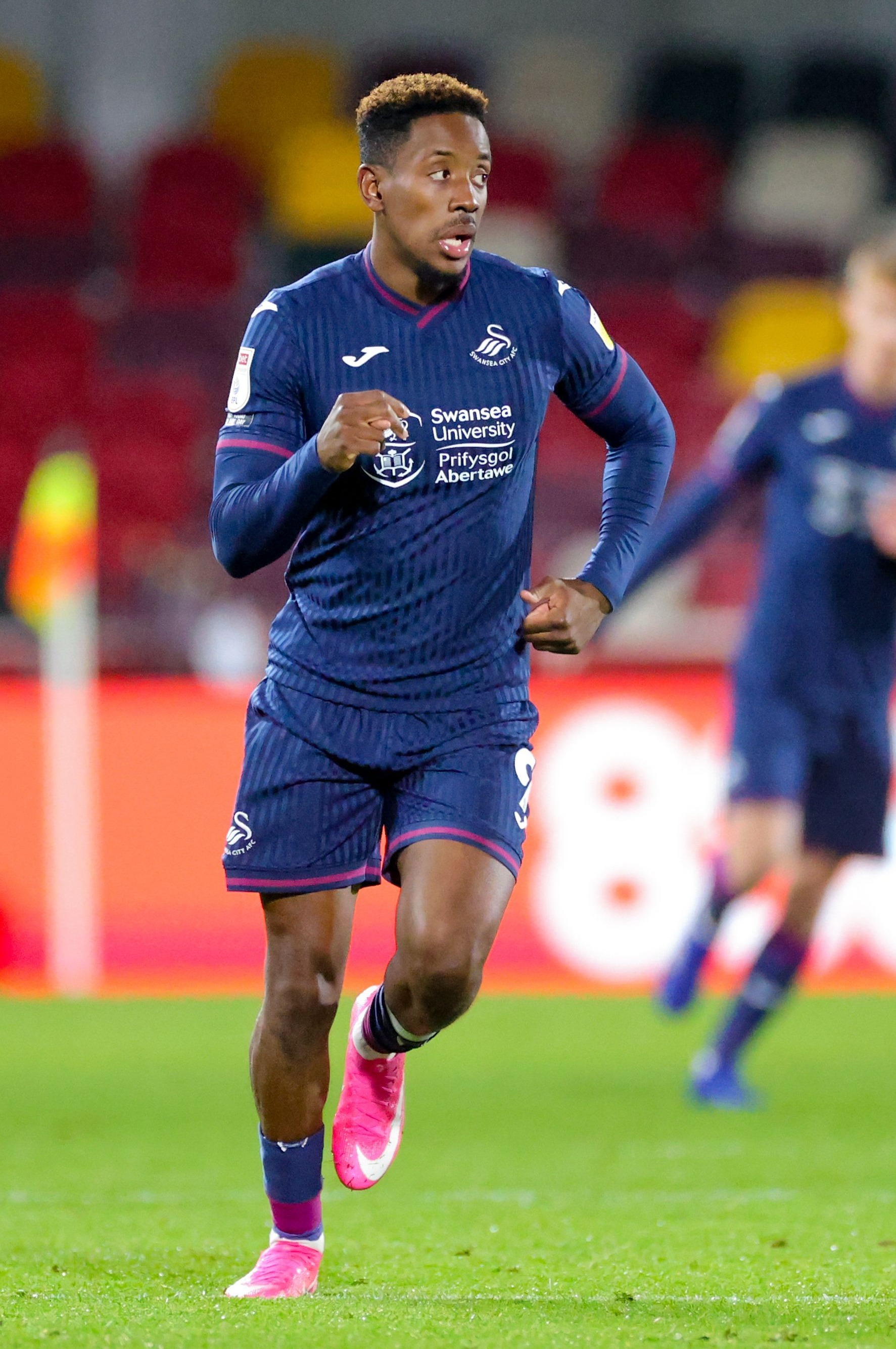 And Lowe fell in love with the Welsh club for their swashbuckling style under first Brendan Rodgers and then Michael Laudrup.

Now nine years later he is hoping to help shoot them back into the big-time.

After Swansea lost 1-0 at home to Manchester United in 2011, Lowe enthusiastically tweeted: “Watching Match Of The Day. Well done Swansea, great passing side!”

In another – after seeing them thump Fulham 3-0 at Craven Cottage – he gushed: “Swansea’s all orange kit is swag.”

And he was bowled over when he was elevated into the Barnet Under-21s side and had the chance to take on the Welsh kids.

First he tweeted, “I’m buzzin’ for trips like Swansea away this season” then, after losing 1-0 at The Hive, he wrote, “Swansea was a very good side.”

So Lowe, now 26, jumped at the chance to move to the Liberty Stadium from Wigan during the summer. 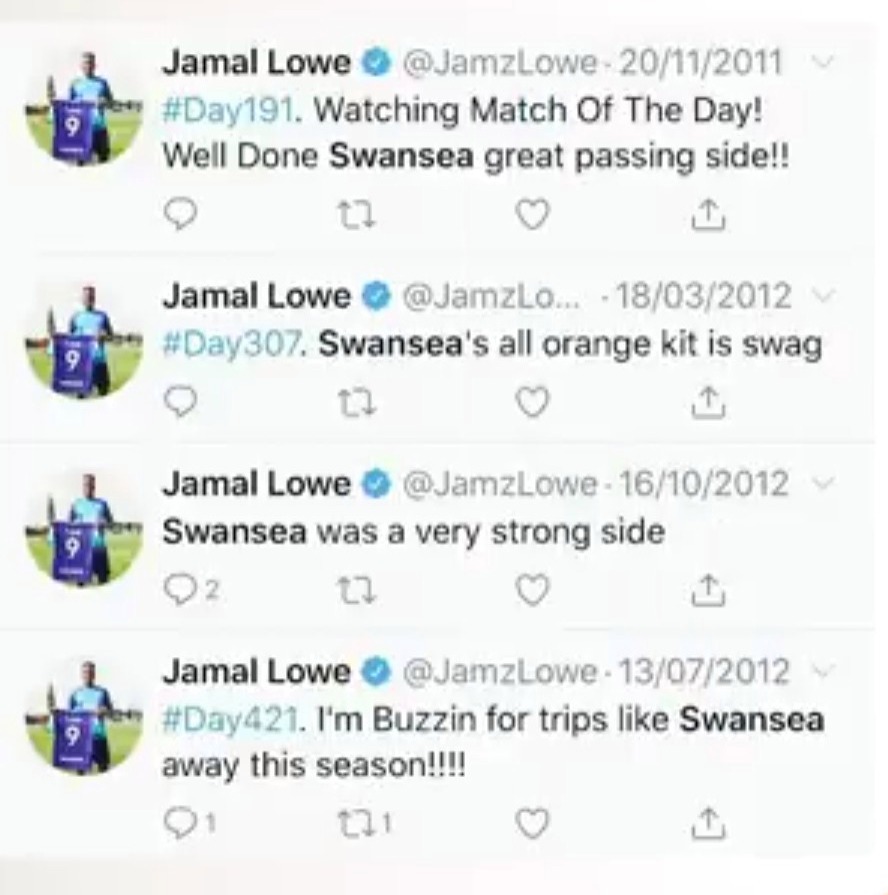 And he said: “I don’t know how they found those tweets from all those years ago … incredible.

“I was a kid tweeting what I was seeing. I was watching Swansea and became inspired about the way they played.

“Wayne Routledge and Nathan Dyer are still here from the time I started watching them while Andre Ayew and Kyle Naughton were big players for the club in the Premier League.

“In my view, it was only Arsenal at the time who were playing that type of tippy-tappy football. They had been newly promoted to the Premier League and stuck to their philosophy all the way. It was just so slick and took everyone by surprise.

“And, even today, it’s the way the club want to play. It’s ingrained into their DNA.”

The second-placed Swans travel to Norwich in third for what is the Championship’s game of the day on Saturday.

Victory could even take the Welsh club top if Reading lose at home to Stoke.

Boss Steve Cooper’s credentials – like his predecessor Graham Potter – are rapidly rising. Having led England to winning the Under-17s World Cup in 2017, he guided the Swans to the play-offs last season but is hoping to go one better this time.

Steve Cooper definitely can become a Premier League manager – and we’re all pushing to get him there as we all want to be at that level too.”

And Lowe said: “What I love about Steve is his approachability. It’s a big thing compared to other managers who are daunting or hard to approach, especially when you need to have a tough conversation.

“He’s told me his phone number is there if I need to call him or the door open if I need to see him. That’s a huge thing when you’re a new player and are welcomed into the club like that.

“He definitely can become a Premier League manager – and we’re all pushing to get him there as we all want to be at that level too.”

If Lowe reaches his dream of playing in the top division, he will have done it the hard way.

The winger has played in six of the top seven tiers of English football.
Having started out with Barnet, he has also had spells at Hayes & Yeading, Boreham Wood, Hitchin, St Albans, Farnborough, Hemel Hempstead, Hampton & Richmond, Portsmouth and Wigan.

And he is proud of his non-league roots even if at the time he found it challenging – especially after his release from Barnet in 2015.

He said: “It’s real-life football. The fouls you get in the Championship wouldn’t be given in National League South because it’s rougher. 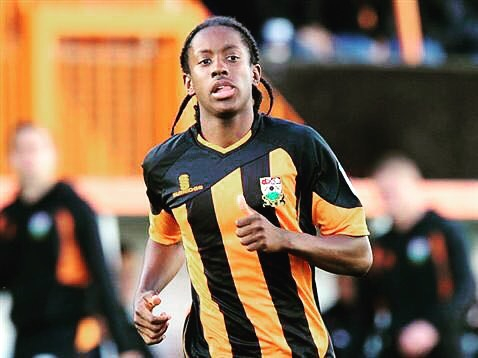 “Non-league is a mixed bag – you get people like myself who want to become pros while there are others who are decent footballers content at that level and go out for a few beers on a Friday night.

“Then you have the ones who just want to release all their anger on a Saturday. It was a case of dealing with all those things.

“There are some players who don’t have the same aspirations or goals you have and it can be difficult because they can affect the outcome of the game. If someone doesn’t care as much about the game as you do, it affects the team.

“It’s not their fault – and I don’t criticise them either – it’s just a factor you must deal with. You can’t hold it against people for wanting to live a normal life.

“I had to go part-time and worked as a PE teacher and teams started to train in the morning and be more full-time – that was tough because it ruled out a lot of clubs. I could only play for teams that trained on a Tuesday and Thursday evening.

“It was a very humbling way to progress because when you get to the higher levels like I am now you know how life is down the other side.

“Don’t get wrong, it would’ve been great to have turned pro at a top Premier League club at 18 and still be there.

“But this has been a great journey and it’s one that can inspire others never to give up.” 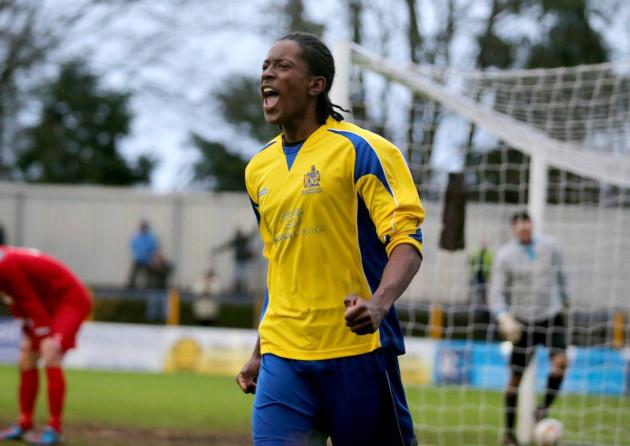 Lowe got snapped up by Portsmouth and helped them get promoted from League Two and then spent last season at Wigan, which ended in the heartbreak of relegation after the EFL docked them 12 points at the end of the season.

He said: “It was one of the most unjust decisions. It was crazy how they told us they’d take the 12 points off our only if it put us into a relegation position but would apply it next season if it didn’t – what sort of decision is that?”

But things are going great in the Valleys now and Swansea are most definitely looking the business.

One of the star performers has been Ayew. The Ghana striker top scored last season with 18 goals and has five already this time around.

It was a huge boost for fans that Swansea managed to keep their talisman.

And Lowe said: “He’s the ultimate professional, he doesn’t mess about. His quality off the pitch is the thing that surprised me.

“Everyone knows how good he is on the pitch – but the way he is around the group with some of the older boys and younger boys, he mixes with everyone. 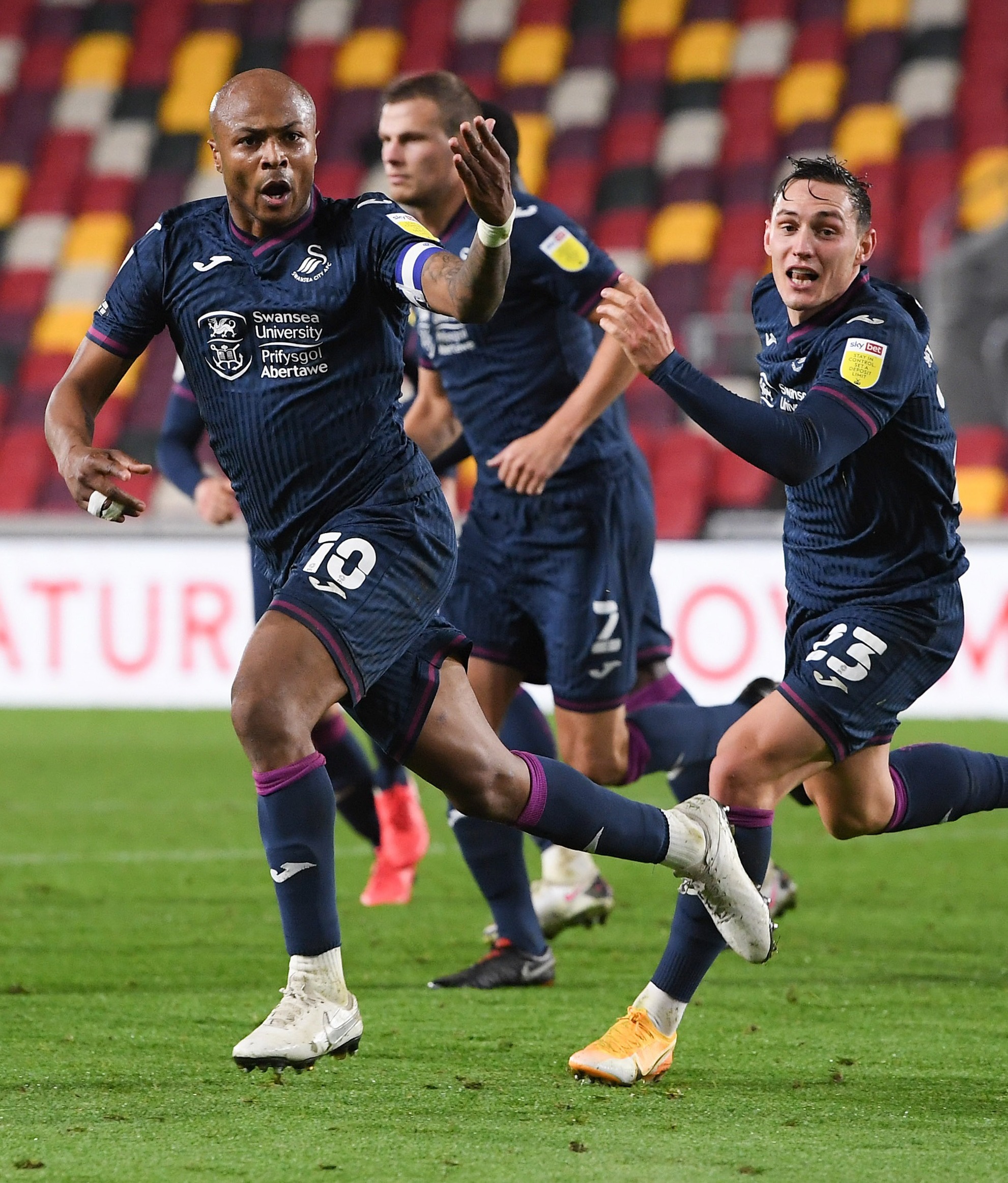 “On the field, he has just developed a know-how. He always manages to get in the right place at the right time. It’s massive. Even if it’s a deflection, it drops to him because he is there.

“The man has done it in every league across Europe that he’s played in as well as for his country. He’s the one we all wants to learn from and turn to for inspiration."

Lowe is certainly motivated and driven to reach the top.

He said: “It’s hard to imaginethree-and-a-half years ago I was playing in the National League at Hampton & Richmond – and now I’m just one step away from the Premier League.”

Lowe will rip out seats himself if fans let in

JAMAL LOWE says he will personally get a screwdriver and rip out some seats if it means fans will be let safely back into stadiums.

The Swansea ace cannot understand why supporters were not allowed back into grounds earlier and wants the government to ensure they are once the current lockdown is over.

He said: "What confuses me is when I go home from a huge stadium with no fans, I switch on television and Strictly Come Dancing is on with a small audience in a studio.

"It makes absolutely no sense. Football have the biggest arenas in the country, all outside,yet the government cannot allow a restricted number of supporters in. It's baffling.

"Club can easily take some of the seats out temporarily to ensure fans are at a safe social distance. You will get so many volunteers who will help with that – and I will be the first one out there, with many other players I am sure, with a screwdriver ripping them out if it means fans return to the games."