Tokyo: Australian BMX racing star Saya Sakakibara has been stretchered off from her last semi-final run at the Tokyo Olympics.

Sakakibara led throughout the course until the final turn. As she leapt into the final ditch of the concrete course her bike appeared to skid, before another rider landed on top of her. 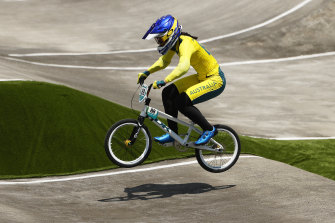 In tense scenes, she was stretchered off the course to claps from officials. She was conscious and had her arms raised above her head as she was carried away.

The 21-year-old was set to take out one of the top spots in the final where she was a genuine medal contender.

“I feel like I let everyone down. Especially my brother. I, honestly, I don’t really know what happened, but I know that I was riding really well,” she said. 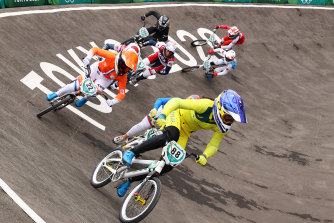 “I came down with Alise who caught up with me, we came down together. That’s all I remember. Yeah, this is so disappointing.

Sakakibara was lucky to avoid being taken out in her first run after two riders landed on top of each other, but she went wide on the crucial first corner allowing American Alise Willoughby through.

In heat two Reynolds flew over the first corner, ending up off the course as she looked to built up speed coming down the sharp left-hand bank. The mistake cost her dearly, ending up crossing the last place. But the 30-year-old made up the lost time in her second run, pushing Briton Bethany Schriever all the way in Ariake Park.

Never miss a medal or great sporting moment with our Olympic update emailed daily. Sign up for our Sport newsletter here.