When Mali qualified for the women’s basketball tournament at the 2008 Beijing Olympics, some players received a house and prize money for their part in the remarkable achievement by a country that is extremely poor and largely unsupportive of women’s rights.

Another Olympics will begin in Tokyo next month. Mali did not qualify in women’s basketball. Instead, after an investigation by The New York Times, the West African nation is embroiled in the latest of what are unceasing scandals in global sports from basketball to gymnastics to soccer to artistic swimming to judo.

The scandals assume an awful sameness: allegations of systemic sexual, physical and psychological abuse of young athletes, many of them teenage women, by the officials and coaches who are supposed to nurture and protect them.

The International Olympic Committee, international sports federations and national governing bodies always dutifully condemn the mistreatment but seem unwilling or unable to stop it. In fact, their first instinct has been shown in widely-publicized cases to protect themselves ahead of the abused.

Activists told The Times that they knew of at least 100 female basketball players in Mali, mostly teenagers, who said they were abused by a dozen or so coaches since the early 2000s, including a 16-year-old who got pregnant by her coach and was pressured into having an abortion in 2018.

Hamane Niang, the president of FIBA, basketball’s world governing body, has stepped aside while FIBA conducts its own investigation. Niang is not accused of committing sexual abuse but of largely ignoring the assault of female players during a dozen years as the president of Mali’s basketball federation and as the country’s sports minister. His inaction as president of FIBA, his critics charge, continues to leave women vulnerable in Mali. Several players said he witnessed abusive behavior and did nothing to stop it. He denies any wrongdoing.

Two coaches from Mali who are accused of abuse have been suspended by FIBA. Players told The Times that they were extorted for sex by the coaches, promised playing time and sports equipment if they complied, kept out of games and competitions if they refused. Further, the players said, Mali’s basketball federation knew about the abuse and helped cover it up.

This follows other appalling cases in recent years: The president of Afghanistan’s soccer federation was barred for life by FIFA for sexually abusing players on the women’s national team. The president of Haiti’s soccer federation was also permanently banned after he was accused of raping players as young as 14 and keeping them as child slaves. Lawrence G. Nassar, the American gymnastics doctor, was jailed effectively for life for preying on hundreds of young female athletes. Human Rights Watch documented 121 deaths at judo schools in Japan between 1983 and 2016 in a report about the physical abuse of child athletes there.

Just days ago, a dozen female water polo players in California reached a $14 million settlement after accusing a coach of sexually abusing them when they were minors. About half of the 11,000 athletes expected to compete at the Tokyo Olympics will be women. They will be rightfully celebrated. But too many female athletes have also been wrongfully left susceptible to mistreatment.

“How much is a little girl worth?” Rachael Denhollander, the first gymnast to speak up against Nassar, asked in the title of a book she wrote. 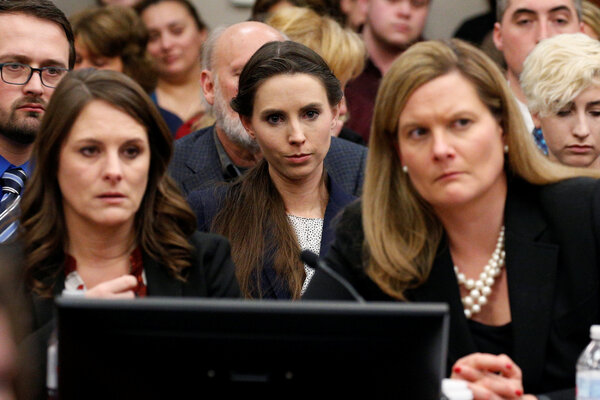 In too many cases, abuse has not been uncovered by internal safeguards, often lacking teeth, but by external watchdogs like the news media and Human Rights Watch. And, as in Mali, by the courage of nearly powerless athletes who bravely stood up to the powerful men who operate international sports.

“In the run-up to the Olympics, global sports bodies — the I.O.C., FIBA, FIFA — need to take a hard look at protecting children,” said Minky Worden, the director of global initiatives for Human Rights Watch, who has been at the forefront of uncovering abuse of young female athletes.

“Simple child safeguarding protections available in kindergarten are not being implemented in global sport,” Worden said. “It’s all guidelines, all voluntary, and no one is checking up on whether the president or head coach of the federation is going to a teenage girl’s hotel room at 2 a.m. to demand sex.”

The idea that sports federations can be relied on as a source of safety “is completely delusional,” Worden said.

The I.O.C. was asked by The Times to comment on the accusations of abuse in Mali. Its response said that harassment and abuse is “very concerning” and suggested that victims contact the FIBA abuse hotline or the I.O.C. hotline. This assumes a frightened teenager in Mali or Haiti would have knowledge of, or access to, such a hotline, never mind the language barrier.

“It’s all about circling the wagons at the I.O.C. and not protecting the children,” Worden said.

There are much more forceful, common sense approaches to keeping athletes safe, she said. Conduct vigorous background checks on officials and coaches. Tie funding for sports federations to zero tolerance of any kind of abuse.

“Global sport claims to be the way children get an education and economic opportunity,” Worden said. “But sport is not a force for good if you are a teenager whose coach is touching you inappropriately and you have nowhere to turn.”