Like all transcendent performers, Fernando Tatis Jr. has standards. When he is on stage, he knows only one way to act. So when Tatis, the dazzling shortstop for the San Diego Padres, considered whether to participate in the All-Star Home Run Derby in Denver on July 12, he knew he had to decline; he cannot risk aggravating the shoulder he dislocated in April.

“I feel like if I go out there, I’m not going to hold myself back,” Tatis said on Friday. “If I do it, I want to give a real show.”

Tatis was speaking by phone from the clubhouse at Petco Park before the Padres played the Arizona Diamondbacks. He then went out and staged a personal home run derby, belting three in his first three at-bats in an 11-5 victory, the eighth win in a row for San Diego. The homers brought his N.L.-leading total to 25, to go with 54 runs batted in, a .294 average and 15 stolen bases. (And a major league-high of 16 errors.)

The numbers, though, only begin to describe Tatis’s appeal. Forty years after Fernando Valenzuela captivated Los Angeles, a new Fernandomania is gripping Southern California. From his blond dreadlocks to his bat flips to his occasional shimmy on a home run trot, Tatis, 22, commands attention like no other player in the game.

These are heady times for the Padres, who have not been to the World Series in Tatis’s lifetime and are one of six franchises without a championship. Tatis, whose $340 million contract runs through 2034, will have plenty of chances to deliver one. But with a well-stocked roster that includes Manny Machado, Yu Darvish and Eric Hosmer, he’d like to start now.

This interview has been lightly edited and condensed for clarity. 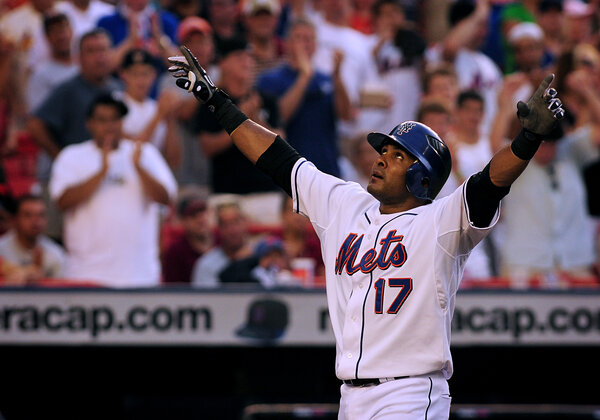 Your father played 11 seasons in the majors, most of it before you were born or when you were too young to remember. But you were 9 when he joined the Mets in 2008 for his final three seasons. What stands out from those years?

I remember him on the Orioles (in 2006), but with the Mets is where I have more of my memories. It was the time I fell in love with the game. I was one of those kids, when they’re talking about baseball, I never talked. When those big boys were talking, I was always listening and learning and I feel like I took advantage of it.

Who were some of your favorite teammates of your dad’s?

It was pretty fun to watch Jose Reyes, and Angel Pagan, too.

Reyes, of course, is from the Dominican Republic, like you. What is it about your hometown, San Pedro de Macoris, that makes it the No. 1 producer of major league players per capita in the world?

We live baseball. That’s the thing: We live this game. We’re passionate about it. I feel like it’s just in our blood and it’s been passed down through generations. We just love this game.

You helped Estrellas Orientales win a championship in the Dominican Winter League in 2018-19, when your dad was the manager. That was their first title since 1968. How would you describe that experience?

Winning that championship for my hometown, in front of my family and all the people I knew growing up, it was probably the best experience I’m ever going to live in my life. It’s something I grew up with, and seeing it happen with my dad as manager and me as the shortstop — it’s like a movie, something that’s hard to believe. They even canceled school for a week!

In San Diego, do you see any of the same kind of yearning for something they’ve never had there?

Definitely. It’s a bigger stage, and that’s one of my dreams. Hopefully I can give this city multiple championships.

The Padres are the only team in town, and the atmosphere at the ballpark seems incredible. How would you describe it?

The vibe around San Diego is just amazing. You know what the team has been building for the last four or five years, and it’s finally coming together. The fans are seeing it, the city is seeing it and I feel like everybody’s seeing it now, too. Everybody’s just falling in love around here.

The Padres lead the majors in stolen bases by a lot, and we don’t see many teams stealing bases anymore. How does stealing bases help your team, and why don’t more teams do it?

We’re a very athletic team, and I feel like people have shut down stealing bases based on numbers or blah, blah, blah — I don’t know. But over here, we’re still playing that old-school baseball with a very good mix of new baseball. We’re finding a way to do it, plus the athletes we have on this team are working their butts off.

As we speak, you are leading the National League in home runs and stolen bases. (Ronald Acuna Jr. and Trea Turner overtook Tatis for the stolen base lead on Friday night.) In the past 111 years, only one player — Chuck Klein in 1932 — has led his league in homers and steals in the same season. Do you think you can do it?

It’s going to be a really hard one, but hopefully we can stay on the same rhythm, stay healthy and definitely we’re going to work for it.

He’s probably a guy you grew up rooting for, I would guess.

What are you working on, specifically, to improve your game?

Definitely my defense needs to get cleaner, and also my hitting needs to get a little bit more consistent. But I feel like it’s part of this game. I’m 22, I’m still learning a lot about this game. Hopefully we can keep playing it the right way and just keep learning.

My son plays the video game MLB: The Show all of the time, so I hear your intro constantly: “I’m sorry if things got too exciting for you, and this isn’t the game that you remember. But here’s the thing: We’re never going back.” What do you mean by that, because that’s a bold statement?

(laughs) Just let the kids play. Everything’s around that sentence. If you really have that inner kid, that dream of playing baseball, and now you’re on the big stage, just do what you dreamed of, do what you worked for. Just put all your energy out there and enjoy the moment. Enjoy when you’re doing good, enjoy the struggles, because next thing you know, 10 years are going to pass by — if you’re lucky enough to play this game for 10 years — and then you’re going to be out, and you’re going to miss those stories.

Do you think that attitude can help attract more young fans to the game?

I feel like it can. People are just looking for that natural hype, and when they see players playing their game to their fullest, giving everything they have, that’s all they want to see. They want to have a good show. It’s all about that.

To that end, tell me about the swag chain — the oversized gold necklace with a spinning “SD” medallion that Padres players wear after a home run.

(laughs) That was Manny’s idea — and he blew it out. It’s definitely something that brought more swag to the team. It’s solid gold. It’s pretty heavy, trust me.

You accessorize the brown-and-yellow Padres uniform with the color pink: always a pink wristband, sometimes a pink arm sleeve. Why pink?

I’ve always played with pink since I was in the minor leagues. It’s something I do in tribute to my mom. In the house, there were only men, so I put that on my wristband so she can know I’m always thinking about her. I think it’s one of the coolest things I can put out there.

OK, now the eye black: I can’t figure that out. Sometimes it’s a cross, sometimes you stylize it a little. You have something going on there, right?

I mix it up. Sometimes I go with a cross, sometimes I put a little bit of a design in there, sometimes I just try to have fun with it. It depends how I feel before the game.

Your brother, Elijah, is a minor leaguer with the White Sox, the team that traded you to the Padres for James Shields when you were 17 years old. How much do you communicate with him?

He’s at extended spring training now, he’s going to rookie ball. We talk every day and he’s making his way. Now he’s going through the struggle of the minor leagues, and I just wish him luck.

I’m guessing the White Sox won’t be trading him.