This is the rule that was meant to seem weird in 2020. Before the four-month shutdown, plus-size playoffs, cardboard cutouts, phantom runners, neutral sites and so on, the three-batter-minimum was the radical change for this season.

The purpose was mostly to limit tedious pitching changes by requiring each pitcher to finish an inning or face at least three batters. The rule was approved before the pandemic, which means it is here for the postseason, too. In Game 1 of the American League Championship Series on Sunday, we saw the wisdom behind it.

Not that Kevin Cash would agree. Cash, the Tampa Bay Rays’ manager, has little use for a gimmick that limits his options.

“I wasn’t thrilled with it; I don’t know if I have changed my mind or not,” Cash said late Sunday night. “Ideally, you recognize it, you get used to it; we had a little bit of spring and 60 games to prepare for it. And sometimes you’re going to get pinned in there, pinned in those situations that make you a little uncomfortable.”

Cash felt that way in the eighth inning of the Rays’ 2-1 victory over the Houston Astros in San Diego. Two of his best relievers — Nick Anderson and Pete Fairbanks — were unavailable after combining for 14 outs in Friday’s division series clincher against the Yankees. The middle of the order was coming up, and three pitchers had already worked.

Diego Castillo, who had closed out the Yankees on Friday, had promised to be ready for the end of Game 1. But what to do about the eighth? The Astros had the left-handed Michael Brantley due up, followed by the right-handers Alex Bregman and Carlos Correa.

Cash went with a left-hander, Aaron Loup, who had not pitched in 10 days. The Rays have few players like Loup, who has eight full years in the majors, enough service time to command a high salary. But Loup, 32, is a Rays kind of player, flawed but fixable at a good price.

Loup had bounced among three teams over the previous two seasons, missing almost all of 2019 with an elbow injury. The Rays signed him just before spring training for $1.65 million, and he proved to be healthy and effective.

Cash did not use Loup at all against the Yankees. Yet there he was, pressed into a critical spot, mandated to face at least three dangerous hitters — and on his very first pitch, he drilled Brantley on the backside with a fastball.

“I figured Loupy was fresh,” Cash said. “He just comes out and first pitch, didn’t have his bearings straight. Ideally you don’t hit the first left-hander you see.”

For fans with long memories, the pitch evoked perhaps the greatest A.L.C.S. game of all — the fifth game in 1986 between the California Angels and the Boston Red Sox. One out from the World Series with a one-run lead in the ninth, Angels Manager Gene Mauch called for a lefty, Gary Lucas, to face the left-handed Rich Gedman. With Anaheim Stadium ready to burst, Lucas plunked Gedman with his first pitch.

Out went Lucas as Mauch again sought an ideal matchup: a right-hander, Donnie Moore, against the right-handed Dave Henderson. But Moore hung a splitter, Henderson smashed it over the left field wall, and Mauch never did win a pennant.

The one-batter option is gone now, but strategy is not. The three-batter-minimum rule just gives managers a different set of variables to consider, and the decisions can be just as intriguing.

While right-handers historically hit him better than lefties, Loup handled both sides well this season, holding righties to a .192 average, even better than his .212 mark against lefties. He got ahead of Bregman with cutters, then blew him away with a 95 mile-an-hour fastball, 3 m.p.h. harder than his usual fastball. Missing the Yankees series paid off.

“He’s got enough velo on his fastball, certainly when he’s rested,” Cash said. “You saw some 94s and 95s that can really challenge any hitter.”

Even so, Loup didn’t really have it on Sunday — he followed with a wild pitch, then a walk and a single that loaded the bases for Yuli Gurriel. Cash called for Castillo, who erased it all with one pitch: a sinker that baited Gurriel into a double-play grounder to second baseman Brandon Lowe.

“I told Brosseau he was going to get the ground ball,” catcher Mike Zunino said, referring to third baseman Mike Brosseau. “It ended up going to B-Lowe, but you know with runners in scoring position, guys tend to get a little bit more aggressive. We just wanted to get something that had a better chance of getting on the ground than in the air, and luckily it worked out.”

Luck plays a role in every game, of course, but the Rays have much more going for them. Challenged every year by a meager payroll, their baseball operations staff consistently finds low-cost talent for coaches to develop. 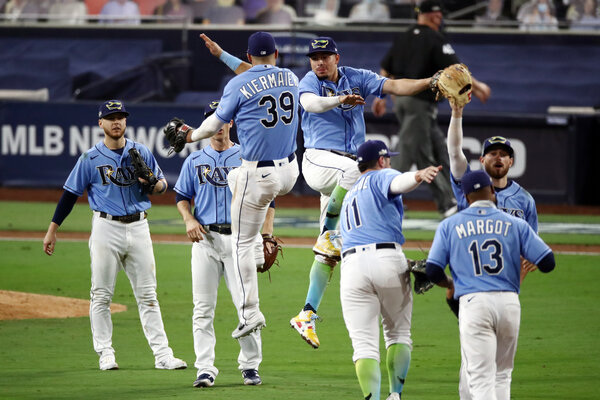 Friday’s middle relievers, Anderson and Fairbanks, arrived in trades in July 2019, neither with a full year in the majors. Sunday’s duo, John Curtiss and Ryan Thompson, were even more obscure.

Curtiss had a 10.95 E.R.A. for the Class AAA Lehigh Valley Iron Pigs when the Philadelphia Phillies released him last summer; the Rays signed him in February. Thompson was recovering from Tommy John surgery in the Astros’ farm system when the Rays chose him in the Rule 5 draft in 2018. He had pitched just a handful of games above Class AA.

“These guys, they come in here and they step up and they stand out,” said Snell, a former Cy Young Award winner. “They’re very talented and very good at what they do — and it’s a lot of them.”

Cash has so many good choices that he always seems to make the right move. A new rule restricts him, but most games you hardly even notice.