Olympic champion Mack Horton has revealed that he wasn’t drug tested for nine months at the height of the COVID-19 pandemic as concern grows about the level of global testing ahead of the rescheduled Tokyo Olympics, which begin on July 23.

Horton’s story will be one of many as anti-doping authorities scramble to play catch up ahead of an Olympic Games many fear could be the dirtiest on record given the difficulties faced by testing agencies amid the lockdowns, travel restrictions and health concerns spawned by the the virus. 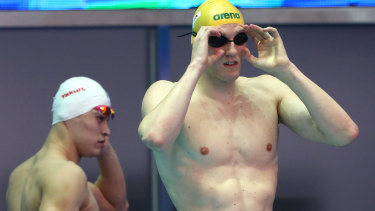 Mack Horton and his great rival Sun Yang, who has now been banned from the sport.Credit:Getty

The 400m freestyle champion is a vocal anti-doping advocate and has welcomed the renewed testing push that has started to gain momentum domestically since restrictions have been gradually eased across the states. But he has obvious concerns heading into Tokyo given the lack of access and testing over long stretches leading into the Games.

“Of course it’s a worry. The thing that’s not ideal is different standards in every country.”

In theory, athletes were still subject to testing at any time and any place from the World Anti-Doping Agency. But the reality was very different, with WADA conducting just 167,759 tests across all sports in 2020, which was almost a 50 per cent drop from the testing rate in 2019.

Much of that was due to the lack of sport and the in-competition testing that would accompany events, while access to athletes was greatly diminished.

A spokesperson for Sport Integrity Australia, formerly ASADA, said there were inevitable changes to the testing regime due to the pandemic but the speed and number of tests had now returned to pre-COVID-19 pace.

“We maintained the ability to deliver critical testing, where required, however we adapted our testing program to the environment at the time to ensure the health and safety of our staff and athletes and to ensure compliance with relevant health directions,” SIA said.

“Sport Integrity Australia is a member of the Tokyo Olympics pre-games taskforce and planned testing of Australian athletes in the lead up to Tokyo is on track.”

Experts are concerned about the anti-doping landscape in Tokyo and what may be uncovered during the planned testing blitz by the International Olympic Committee (IOC) immediately before and during competition, as well as analysis of historic samples in coming years.

“The limited number of sporting competitions that took place in 2020, as well as the restrictions linked to the pandemic, had a considerable impact on the number of samples collected, especially between March and June,” the IOC said in a document issued in March that suggested its testing would be the most extensive in history. “However, sample collection, which focused on higher risk sports, was almost back to normal during the second part of the year.”

Athletes reacted with dismay when the major anti-doping bodies wound back testing operations during the middle of last year. American two-time Olympic triple jump champion Christian Taylor said it presented cheats with a window of opportunity to get an unfair advantage.

“We’re already battling the constant battle of people trying to find loopholes and grey areas and the frustrating part is [anti-doping agencies] said ‘here’s a window that you can take advantage of’,” he told BBC Sport last June.

“I believe we still have to at least give the impression that testing is going to take place. If they know they’re not going to be tested, we’re really opening up the doors to difficult times. Why say anything at all?”

But the damage may only be seen in Tokyo and beyond depending on the lengths drug cheats or regimes went to make the most of the temporary smokescreen that descended across almost all global sport.

Horton will be one of the main attractions at the Australian Swimming Championships on the Gold Coast, which began on Wednesday on an upside-down roster that features heats at night and finals in the morning to mirror the schedule in place at the Tokyo Games.

Horton is by his own admission a notoriously sluggish campaigner while in full training, so it is not expected that the Victorian to be setting any records as he continues his path towards the official Olympic trials in June in Adelaide.

But there will be plenty of eyes on another 400m gun, world champion Ariarne Titmus, who will make her return to serious competition after a shoulder injury. That’s not to say Titmus hasn’t been in the pool, with the 20-year-old turning the arms over at a low-key meet in Brisbane a month ago well away from the cameras.

Titmus swam a 4:06s for her 400m, well above her sub-four minute standard but enough to suggest her road to recovery is going to be a lot smoother than initially feared.

“I was quite comfortable where she was at,” said Rohan Taylor, Australia’s head swimming coach. “I was confident she was on the right track. It gave her confidence that she can get up and compete. Training is one thing but putting yourself under pressure is another.”