Gale Sayers, the will-o-the-wisp running back who in a short but brilliant career with the Chicago Bears left opponents, as they used to say, clutching at air, died on Tuesday at his home in Wakarusa, Ind. He was 77.

His son Guy Bullard said the cause of death was complications of dementia and Alzheimer’s disease.

In March 2017, his family revealed that Sayers had dementia after he had publicly displayed symptoms of it for four years. He joins a growing list of football players who developed dementia and died of brain damage while still young.

Though his career was cut short by knee injuries, “Sayers is the greatest halfback I ever saw,” Ernie Accorsi, who was general manager of three National Football League teams, wrote in an email in 2017.

Jim Brown was the greatest running back of all time, he said, and some great fullbacks may have had more heft and power than Sayers — who was 6 feet tall and weighed 198 pounds — but nobody could cut corners like Sayers.

“I never saw anyone who could be at full speed, stop on a dime and, in one step acceleration, be at top speed again,” Accorsi said. “I saw runs he made that if it was one-handed touch football instead of tackle they couldn’t have caught him.”

As Sayers himself said of ability to elude tacklers in close quarters, “All I needed was 18 inches.”

A consensus all-American at the University of Kansas — where he was called “the Kansas Comet” — Sayers chose to play for the Bears of the established N.F.L. over the Kansas City Chiefs of the upstart American Football League in 1965. He went on to have one of the greatest rookie seasons ever.

He led the league in all-purpose yards (rushing, receiving and runbacks) with 2,272 yards, scored 22 touchdowns, six of them in one game, and was named to the all-league team for the first of five consecutive years.

Sayers was already a legend in 1967 after two pro seasons, when Rick Volk, a safety from the University of Michigan, tried to defend against him while a college all-star team was training at the Bears’ camp.

“He was amazing,” Volk recalled in 2017. “He was running off tackle, and I was the safety and came up to fill the hole. I was two or three feet from him. I was right there. He made a couple of moves — whoo-hoo! I had him dead to rights. He was so quick.” 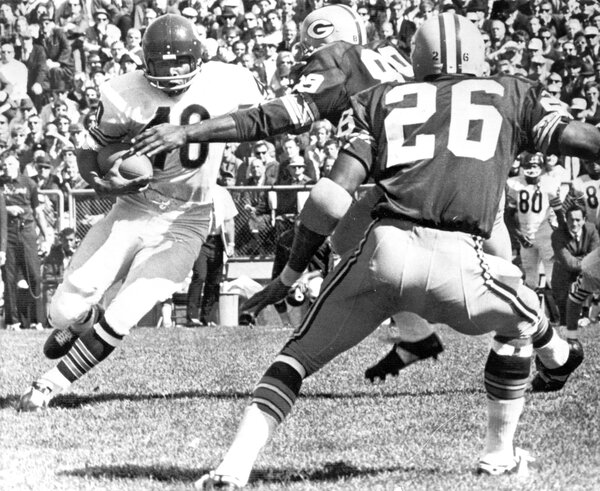 Another meeting came in 1968 after Volk was established with the Baltimore Colts. “I was playing right safety, and he was running a sweep to his right — my left,” Volk recalled. “Mike Curtis came up and Gale reversed to his left. We had him stopped. But he reversed again, and I had an angle on him, but I couldn’t catch him.”

Sayers later likened his 59-yard touchdown run to a slapstick movie chase and claimed he had run past Bubba Smith, the huge Baltimore defender, three separate times. Sayers called it “the greatest run of my professional-football career.”

Asked to describe his strategies and techniques, Sayers told Sports Illustrated in 1965: “I have no idea what I do. I hear people talk about dead leg, shake, change of pace, but I do things without thinking about them.”

It all came crashing down on Nov. 10, 1968 — Sayers’ fourth season — when Kermit Alexander of San Francisco tried to take out Sayers’ lead blocker. When the player moved, Alexander crashed into Sayers’ right knee.

“It’s gone,” Sayers told Alexander, who stayed to comfort him.

“It was my fault, all my fault,” Alexander said. “God, you never want to hurt a player, never. Especially a great player like Gale.” Sayers exonerated Alexander.

Rebuilt by the knee surgery of the time, Sayers returned in 1969 to lead the league with 236 carries for 1,032 yards and was named the NFL Comeback Player of the Year.

But 1969 became a somber season. For two years the Bears had matched players by position when they shared hotel rooms on the road. Sayers, who was Black, was paired with his backup, Brian Piccolo, who was white — apparently the first time a Black and white player had shared a hotel room for an N.F.L. team. The two men bonded, partly through racial jokes.

But in November that year Piccolo was found to have embryonic cell carcinoma of the lungs. Sent to the Memorial-Sloan Kettering Cancer Center in New York, he underwent surgery to remove a malignant tumor, but doctors found that the disease had spread to other organs.

The following May, Sayers was given the George S. Halas Award for the Most Courageous Player. In his acceptance speech, he said: “I love Brian Piccolo. I might have received this award tonight, but tomorrow I will take it to Brian Piccolo at Sloan Kettering. When you hit your knees tonight, please pray for Brian Piccolo.”

Sayers chronicled their friendship in the book “I Am Third,” written with the help of Al Silverman and published that November. It became the basis of an Emmy Award-winning 1971 television movie, “Brian’s Song,” with Billy Dee Williams playing Sayers and James Caan as Piccolo. (A lesser remake was broadcast on television in 2001.)

An injury to his left knee held Sayers to only two games in both 1970 and 1971. After fumbling twice in three carries in an exhibition game in 1972, he retired. He had scored 39 touchdowns in only 68 pro games and compiled a career average of 5.0 yards per carry.

Gale Eugene Sayers was born on May 30, 1943, in Wichita, Kan., the middle of three sons of Roger Sayers, a car mechanic, and Bernice Ross Sayers. The parents and three sons moved from Kansas to Omaha, Neb., where as a high school standout Gale received, by his account, 75 college scholarship offers before choosing the University of Kansas. He played three varsity seasons there — 1962, ’63 and ’64 — and was a consensus all-American selection in his two final seasons.

After his playing career ended, Sayers briefly worked as a television commentator and stockbroker and then for his alma mater, Kansas. He was the athletic director at Southern Illinois University for five years, resigning in 1981.

He had several ventures in private business, including a computer supply company in the Chicago area. He said he had applied to every N.F.L. team for a front-office job but never received an interview — a source of sadness for him, according to friends.

Sayers was married to Linda McNeil in 1962 during his freshman year in college; they were divorced in June 1973. That December he married Ardythe Elaine Bullard. She survives him. He is also survived by a daughter, Gale Lynne; two sons, Timothy and Scott, from his first marriage; three sons, Gaylon, Guy and Gary, from his second marriage; two brothers, Roger, a former track and field star, and Ron, who played eight games as a running back for the San Diego Chargers in the N.F.L.; and two grandchildren.

Since 1987, Gale and Ardythe Sayers had a home in rural Wakarusa. They had been active in the Ardythe and Gale Sayers Center for African American Adoption, part of The Cradle, an adoption center in Evanston, Ill. (His first son, Timothy, was adopted.)

Sayers began to suffer memory loss around 2013 and was examined at the Mayo Clinic.

The family decided to address his condition publicly in March 2017. “People see him, and people began to wonder what was wrong with him,” Ms. Sayers told The Chicago Sun-Times.

The news elicited calls from former teammates like Dick Butkus and former N.F.L. players like Paul Hornung of the Green Bay Packers, Paul Warfield of the Cleveland Browns and Earl Campbell of the Houston Oilers.

“Like the doctor at the Mayo Clinic said, ‘Yes, a part of this has to be on football,’” Ardythe Sayers, told The Kansas City Star in 2017. “It wasn’t so much getting hit in the head. It’s just the shaking of the brain when they took him down with the force they play the game in.”