AUGUSTA, Ga. — C.T. Pan had an exceptional Masters Tournament debut last November, finishing 10 under par for a tie for seventh place and $358,417 in prize money. But the coronavirus pandemic and the tournament’s timing meant that one of sport’s most hallowed stages was not itself.

“This one definitely feels more like my first Masters,” Pan, 29, said this week. “I played nine holes out there with people following, a couple tee shots I had goose bumps just hearing people rooting for me.”

For the 13 golfers who contested their inaugural Masters tournament in November and are in the field again this week, this year’s competition can seem like a second try at a first dance with a childhood crush.

In November, with Augusta National Golf Club almost empty but autumn’s hues abundant, they found a soft course that played long and was susceptible to plugged balls. Now there are fans ready to offer masked roars amid the athletic and aesthetic splendors of a Georgia spring: greens that are fearsomely fast and firm, and azaleas so vivid that their pinks dazzle even from a driving range or more away. 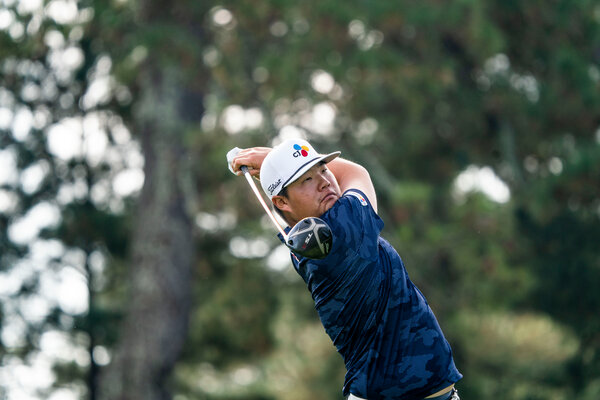 “In November, it was very soft so I knew where to land it and I was confident it was going to stop,” Sungjae Im, who tied for second and had the lowest 72-hole score of any first-year Masters player in history, said through an interpreter. “I need to be strategic on exactly where to land the ball.”

Experience, a hard-earned edge at any tournament, is often seen as essential at the Masters. No player has won in his debut appearance since Fuzzy Zoeller conquered the course 42 years ago. Even though 14 first-timers made the cut in November, a Masters record, ask one player after the next, and nearly every one will preach at length about how Augusta National is particularly prone to rewarding the men familiar with it.

Many past winners have offered counsel to newcomers, like when Phil Mickelson, a three-time winner who placed 46th in his first Masters and was that year’s low amateur, spent time in November advising Cameron Champ about how to play No. 17. (“If you’re going to miss this fairway,” Mickelson said as they surveyed the uphill par-4, “miss it right, because you have an angle into the green.” Champ went on to make birdie or par on the hole, known as Nandina, in every competition round.)

Jon Rahm recently recalled how he offered a different suggestion to Sebastián Muñoz during November’s final round: “I pretty much told him anything you learn today, this week, forget about it because it will never play like this again, period.”

By then, Muñoz had heard a similar message from Vijay Singh and José María Olazábal, two past winners whose views he condensed to nine words: “Man, it’s completely different from what we’re used to.”

And so this year is proving awfully different from what the newcomers experienced a few months ago. Some Augusta National staples, of course, are now modestly more familiar: breath-robbing elevation changes, wind patterns, sight lines, hidebound traditions. What November may have offered most, though, was simply a chance to work out Masters jitters, which are to be expected at a course many players grew up revering.

“I don’t think I learned that much because the course is completely different now,” said Abraham Ancer, who finished in a tie for 13th in November. “But obviously for me it was a great experience to just get confidence and know that I can play well out here.”

Collin Morikawa, who won the P.G.A. Championship last year, is also more confident because of his initial Masters outing. Then again, he noted, he had arrived at Augusta National last year with similar certainty.

“I thought I was all right and I thought I could bring my ‘A’ game and come out here and win,” he said. He finished in a tie for 44th.

“Course knowledge really does help,” he said this week. “Obviously the more reps you get, the better off you’re going to be. It’s never going to hurt you. So finally to be out here for a second time, feel a lot more comfortable, I know where things are, and I know kind of just the nuances of everything.”

He said he had been refining a new driver shot and hoped it would offer him a solution for the straighter holes that are not always compatible with his favored cuts.

“Last year I tried working in a draw, and I wasn’t playing my game,” he said. “I almost tried to, like, tailor my game to how the course fit instead of playing my game and if the hole didn’t hit me, find another way.”

Champ suggested he was trying to learn from mistakes, no matter how different the course may be now. But he and others said they were delighted that fans, called patrons in Masters parlance, were back on the course in limited numbers.

“It is a little weird, but this feels a little more, obviously, like the Masters,” he said just as a cheer rose from the back nine. “Like I said, you can hear the fans — that’s probably on 16 back over there — so it just gives you a little more energy, a little more vibe, especially if you’re playing well.”

The exacting standards of spectators at the Masters, who are thought to be among the most discerning in golf, did not bother Ancer. The pageantry, after all, is part of the tournament’s appeal and, for some golfers, part of the strategy to play a little better.

“It feels nice to be on 12 and hit in front of people, and obviously you feel a little more of a pressure,” he said, referring to a hole where fans are nestled around the tee box. “But it’s nice. I like to feel that.”

He is not one of those players who sees this year’s tournament as his first at Augusta National. At the same time, he has not quite moved on from the 2020 edition.

The invitation, he said, is still in his living room.