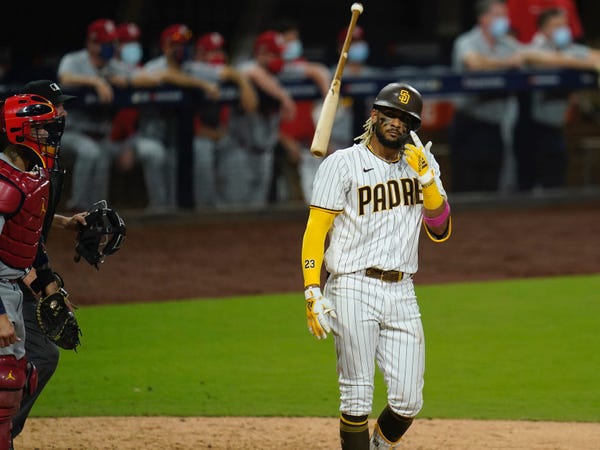 On the brink of elimination from the MLB playoffs, San Diego Padres superstar Fernando Tatis Jr. ripped an opposite-field blast over the right-field fence to extend the Friars' seventh-inning lead by two Thursday night.

But perhaps even more notable than Tatis' monster home run — his second dinger of the night — was the 21-year-old's emphatic bat flip celebrating the feat.

After launching St. Louis Cardinals reliever Giovanny Gallegos' 3-2 pitch out of the park, Tatis calmly walked out of the batter's box and, with a straight face, flung his bat towards the dugout. He walked a few more feet in triumph before picking up his stride and circling the bases to cement the Padres' 9-6 lead.

The shortstop's celebration was reminiscent of José Bautista's mega-famous bat flip during Game 5 of the Toronto Blue Jays' 2015 American League Division Series against the Texas Rangers. And even though Tatis' defiant toss is already being compared to some of the best bat flips in the history of the game, the young star insists that Thursday's celebration wasn't even the best of his career.

According to ESPN MLB insider Jeff Passan, Tatis told the media after San Diego's 11-9 win that his most impressive bat flip came while he was playing for the Estrellas Orientales of the Dominican Winter League. Passan found a clip of the celebration in question, which he posted to Twitter early Friday morning.

Still, Tatis acknowledged that Thursday night's homer was straight out of many young baseball players' dreams.

Tatis and the Padres will face the Cardinals for the third and final game of their Wild Card series Friday at 7:08 p.m. The winner will advance to the National League Division Series against the top-seeded Los Angeles Dodgers beginning Tuesday.