DEAR continental cousins — please don’t tell anyone, but the English are secretly quite fond of the Germans.

Your cars. Your washing machines. Your world-famous sense of humour. Your pop music . . . well, maybe not so much.

But Jurgen Klopp’s smile. And Frau Merkel’s style. And what red-blooded Englishman could dislike a country where they eat sausages for breakfast?

We are even trying to be understanding about Merkel’s wish to ban all Brits from all European beaches this summer when the Germans were part of the great EU vaccination cock-up.

But we get it. We left your precious European Union. You’re hurt. Nobody likes getting dumped. True, England and Germany have some previous. We spent some torrid times in the last century kicking lumps out of each other.

But in the end, there was grudging respect in England for the fine country that Germany became after the last war. A place of peace and prosperity and democracy — at least the part of Germany that didn’t have a Russian jackboot on its throat.

My father had German shrapnel in his legs on the day he died. But I honestly can’t remember Dad ever having a bad word to say about Deutschland — even when I brought home a German girlfriend. Forgive and forget, eh?

The English invented football but Germany perfected it.

We came up with a sport and a pastime where flair, creativity and joy could run amok. And Germans turned football into a machine of frightening efficiency.

As dull as a VW Beetle, perhaps. As boring as a Miele washing machine in full spin cycle, possibly. As dreary as Frau Merkel’s face when Boris Johnson is attempting to do one of his elbow bumps. But German football — like any German product — works. The proof is on the respective shirts.

One tiny star twinkles on the England shirt, representing that golden day in 1966. The Germans have four.

They have also won the Euros a couple of times, although not for a while. That’s why they like to talk about “seven years of hurt” — that German sense of humour again — since they won a major title.

While England has other football rivalries — Argentina, Portugal and Scotland — it is true that the agony and the ecstasy of English football has largely revolved around games versus Germany.

With all that silverware back in the Fatherland, these dates might not mean much to the German football fan. But to the Englishman, they are sacred.
1966 at Wembley. 1990 in Italy. The Euros of 1996. And tonight.

After all our people have endured over the last 15 months, it could truly mean as much as any of those sacred dates. But this is more than a chance to avenge penalty shoot-outs.

This is a chance to feel good about ourselves again.

Around 20 million of us will watch England v Germany tonight.

The fate of the nation does not rest on the result of the match, but the mood of the nation certainly does. Beating the real old enemy would be the shot in the arm our country so desperately craves and so badly needs.

Because right now the prevailing mood here is less than glorious. Because right now it feels like the UK is a nation suffering from long Covid. The shaming of Health Secretary Matt Hancock has revealed a stinking hypocrisy at the heart of our government.

When he was caught with his metaphorical pants down, it proved that our rulers truly do think there is one set of rules for them and another for the rest of us.

The frustration and the fury in the country is palpable.

Something perfect about this match

The English are not a docile people like the Germans. It would be impossible to imagine, for example, the Germans ever voting to leave the European Union.

Even now, they are really good at obeying orders. It’s a bit different for the English. And our mood is sour.

Anger with Boris Johnson’s timidity — and hypocrisy — is palpable.

Frustration is everywhere. Tonight can set us free. It’s time to stuff Die Mannschaft — the German national team — right up the Wembley Way, just like we did in ’66. It’s nothing personal.

The Germans can quote our footballing national anthem — Football’s Coming Home — but it’s already home for us, here in Wembley at five o’clock tonight.

There is something undeniably perfect about this mood-defining match being against Germany. 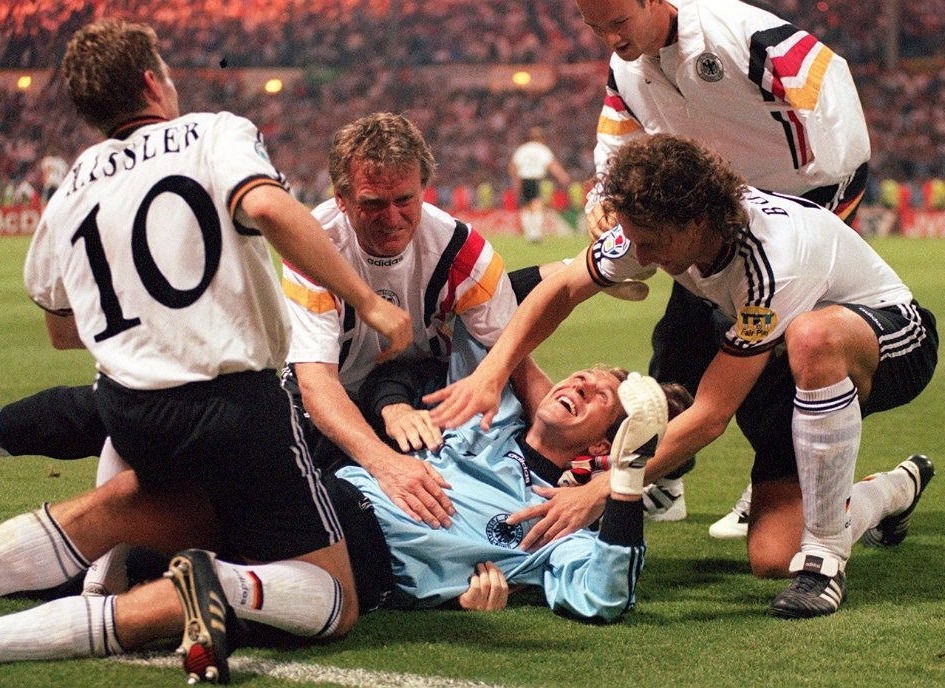 For in the soul of every England football fan, no matter their generation, there is a secret chamber where it is always a rainy summer’s day in 1966, and Bobby Moore is smiling, Bobby Charlton is crying, and Nobby Stiles is dancing.

The 1966 World Cup Final was just a football match.

But I vividly remember what it did to the mood of a people who — 21 years on — still seemed to be recovering from the wounds, trauma and sacrifice of war. ­People like my mum and dad, my aunts and uncles.

Ordinary, working people. Good people. Worthy of love. Something in them came alive that day.

It was when the Sixties started.

Tonight’s match can be like that — a moment of national unity and collective euphoria, the chance for a battered, weary people to begin again.

We need a defining moment like 1966 — to lift our spirits, to remind us of who we are, to wipe away the gloom that hangs like a shroud over our battered nation.

From the local primary school sports day to the green fields of Glastonbury, this should be the height of English summer.

Yet the summer feels like it is already slipping away. But what if the Three Lions run rampant against the Germans tonight? Then it will feel like all our summer days arrived at once.