WIMBLEDON, England: Novak Djokovic has a chance to win a record-equaling 20th Grand Slam title when he plays Matteo Berrettini in the Wimbledon final.

The top-ranked Djokovic is playing in his 30th Grand Slam final and is one title shy of the record shared by his great rivals Roger Federer and Rafael Nadal.

The No. 7-seeded Berrettini is playing in his first Grand Slam final and is trying to become the first Italian to win Wimbledon. 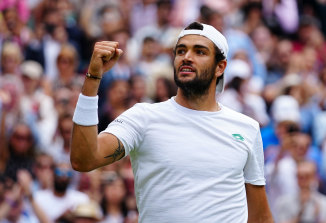 Djokovic is looking for his third straight Wimbledon title and sixth overall.

It is the first time the men’s final will have a female chair umpire, with Marija Cicak of Croatia to officiate the match.