One by one they disappeared from the playoffs, like naughty children on Willy Wonka’s factory tour. The Minnesota Twins plunged into the chocolate river. The Cleveland Indians turned into a blueberry. The Cincinnati Reds fell down a chute. The Chicago White Sox were shrunk on TV.

There were so many Central Division teams in baseball’s expanded playoffs last week that they outnumbered the fictional transgressions in the chocolate factory. The Milwaukee Brewers, the Chicago Cubs and the St. Louis Cardinals also got golden tickets, but never reached the glass elevator. Maybe they ate too many snozzberries.

“We got punched in the teeth two games in a row, and now we’re here,” said the Cubs’ Kris Bryant, suddenly finding himself in the off-season after a swift elimination by the Miami Marlins on Friday. “I don’t know, it’s just the weirdest thing that I’ve experienced maybe in my whole life, definitely in my baseball career. It’s just been strange, very strange.”

That would be a fitting epitaph for this most bizarre year, in and out of baseball. But eight teams play on, and the failure of all those Central teams — and one East division team, the Toronto Blue Jays — sets up a neighborly matchup in all four division series.

Those best-of-five series start Monday in neutral-site parks, with the American League up first. The Houston Astros and the Oakland Athletics, rivals from the West division, will meet in Los Angeles at 4:07 p.m., Eastern time. Four hours later, two East division teams will play in San Diego when the Yankees face the Tampa Bay Rays.

The National League series start on Tuesday: The East teams — the Marlins and the Atlanta Braves — will play in Houston, and the West teams — the San Diego Padres and the Los Angeles Dodgers — will clash in Arlington, Texas.

Only the Rays also faced a divisional opponent in the first round, dispatching Toronto in two games after winning six of their 10 regular-season matchups. The Rays have had an even easier time with the Yankees so far this year, winning eight of 10. 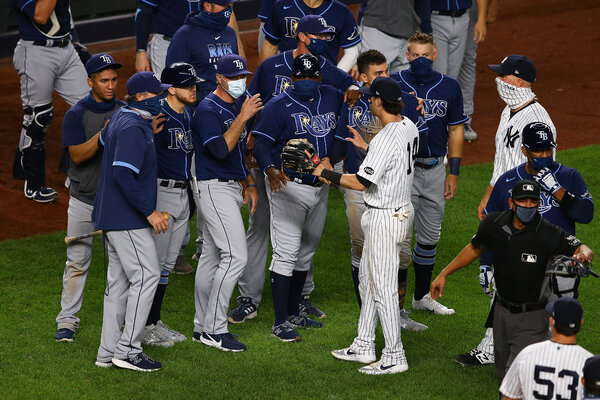 “Look, I don’t think it’s ever an advantage to play the New York Yankees, especially when they’re ready,” Tampa Bay Manager Kevin Cash said. “Saying that, we have a very good team as well. You’d rather have the familiarity, I think. If both teams have the familiarity, it’s kind of even, so if I had to lean one way, it would be that.”

On Sept. 9, the Braves overwhelmed the Marlins, 29-9, the first major league game ever with that score. That also happened to be the Braves’ edge in games with the Marlins across the 2018 and 2019 seasons: 29 wins for Atlanta, nine for Miami. Those Marlins lineups were dismal, but this one is different.

“It’s quite drastically better, to be honest — there’s really not a break in their lineup,” said Braves pitcher Josh Tomlin, adding that the Reds, who failed to score off the Braves in the first round, rely more on power. “Not saying the Marlins don’t, but they’re more of a scrappy team. They put together good at-bats, they go the other way, they don’t strike out a lot. They just have that knack, like little grinders.”

Tomlin is part of a Braves bullpen with a 3.50 earned run average this season, fourth-best in the majors behind three other teams in the final eight: the A’s (2.72), the Dodgers (2.74) and the Rays (3.37). But Atlanta’s relievers worked more innings than every team but the also-ran Boston Red Sox, which could give them an advantage now.

For the first time, there are no off days built into the schedule for the division series or the best-of-seven League Championship Series, making pitching depth more important than ever. With 28-man rosters, teams are also carrying bigger staffs, as they did in the regular season.

But Cash — who laughed at a suggestion that the Rays’ creative bullpen usage gave them an edge — pointed out an important difference.

“Look at it this way,” he said. “We have a four-game series against New York, generally there’s roster moves made within that series. You’re not really able to do that. So the depth is definitely going to be tested. We’ll probably take countless conversations and hours on how we’re going to do right by our pitchers.”

A complete game or two would help, of course, but those have all but vanished; major leaguers combined for just 14 nine-inning outings this season. Not a single pitcher remaining in the playoffs threw as many as 115 pitches in a game, and no Dodger even reached 100.

San Diego’s best starters, Mike Clevinger and Dinelson Lamet, have both topped 100 this season — but both missed the first round with arm injuries. Even if they are activated for the division series, expect a lot of shuffling from the Padres, who used a total of 26 pitching appearances to cover 27 innings against St. Louis.

“They all came in with an attitude that, ‘I’m going to attack, I’m going to be in the zone and I’m going to get ahead of hitters,’” Padres catcher Austin Nola said after guiding nine pitchers through a shutout on Friday. “That was impressive to watch.”

The packed schedule lends itself to such creativity, and should restrict the chances of a single ace hauling his team to the L.C.S. If a division series goes the distance, the Game 1 starter would have just three days’ rest by Game 5. The truncated regular season put less wear on starters’ arms, but few modern pitchers stray from their once-every-five-days routine.

Of the remaining starters who pitched their team’s first-round opener, only Houston’s Zack Greinke has started twice in five days — and he last did it eight years ago. The Dodgers’ David Price thrived on short rest for Boston in the 2018 postseason — but Price opted out of this season.

“You’re probably not going to see many guys start on short rest in a five-game series,” said Tomlin, who faltered on short rest for Cleveland in Game 6 of the 2016 World Series. “There’s some that will, but I don’t think we’ll need to if it gets to that.”

The Astros took a tandem approach against Minnesota in the first round, using four pitchers to collect all but five outs. Each of those pitchers — Greinke, Framber Valdez, Jose Urquidy and Cristian Javier — worked three to five innings, and Houston still had a starter, Lance McCullers, to spare.

“This is what we wanted to do,” Manager Dusty Baker said after the series. “Now we’ve got a very strong, rested bullpen, and Lance McCullers. So this puts us in good position physically.”

That equation will start to change on Monday, when teams meet familiar rivals in unfamiliar conditions — while the teams from the Central watch from home.