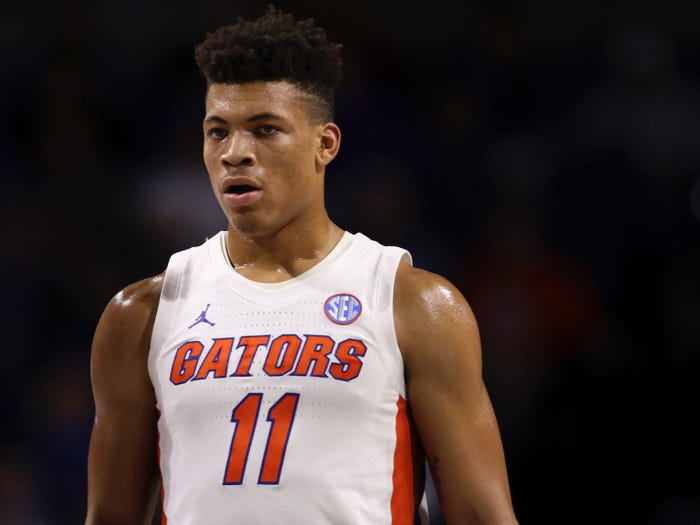 Keyontae Johnson — the Florida Gators star who collapsed during a game and was placed in a medically-induced coma — has been diagnosed with a heart condition related to COVID-19.

The 21-year-old reportedly has acute myocarditis, a disorder that causes inflammation of the heart muscle. If left untreated, the condition could result in fatal consequences such as heart damage or cardiac arrest. Vigorous exercise can put individuals with myocarditis in danger of sudden death, leaving Johnson's future basketball career in jeopardy.

According to Zach Abolverdi of The Gainesville Sun, Johnson's acute myocarditis "can't be definitively linked to his COVID diagnosis." Should medical experts determine causation between his confirmed case of the coronavirus this summer and his newfound heart condition, the repercussions could have a resounding impact across the entire sports world.

The Gators' leading scorer during the 2019-2020 season and the SEC Preseason Player of the Year, Johnson was expected to be one of the brightest stars in college basketball this year. With a solid stroke, advanced instincts, and excellent ball-handling, the 6-foot-5 forward was projected to be a first-round pick in the 2021 NBA Draft.

But that all changed on December 12.

During the first half of an in-state rivalry game against the Florida State Seminoles, Johnson collapsed seemingly unprovoked after coming out of a timeout. Florida's leading scorer fell face down onto the hardwood with a loud thud, prompting his teammates to call for help frantically.

Johnson spent three days in a medically induced coma as doctors attempted to determine the cause of his sudden loss of consciousness. Eventually, the Florida program announced that Johnson was "breathing on his own and speaking," noting that he even FaceTimed with his Gators teammates.

However, there are serious questions about his future in competitive athletics. Exercise exacerbates the risks of dire consequences from myocarditis, and the pace of NCAA and NBA play certainly doesn't lend itself well to an individual struggling with a heart issue.

Generally, experts recommend a three- to six-month recovery period before those diagnosed with myocarditis return to physical activity, according to the Myocarditis Foundation. And, even then, safely restarting exercise first requires testing that shows no evidence of residual heart damage.

Should Johnson check all of those boxes and officially receive the OK to return to the court, there's still a decent chance NBA teams will be unwilling to risk one of their precious picks on a player who may never return to peak form. He's already been ruled out for the remainder of his junior season at Florida, and his athletic career beyond this year is now hanging in the balance.