Is the supercoach soon to be extinct?

Jim Boeheim, how much longer will you hold on at Syracuse?

John Calipari, what about your long ride at Kentucky?

Tom Izzo at Michigan State, and even Nick Saban, the czar of college football at Alabama, have you been double-checking your retirement plans?

Together, you represent the last of a dying breed.

The herd of such coaches — transcendent, paternalistic, charismatic, leading the most vaunted men’s programs in the most popular sports — thinned significantly last week when Mike Krzyzewski, a coaching legend, announced his plans to decamp from Duke. At the end of next season, with 42 years and at least five national titles in the bag, Krzyzewski will pull the curtains on a remarkable career.

The transition isn’t just a monumental moment in the history of Duke basketball, royalty in college sports. It also signals broad, fundamental change. As amateur and professional players disrupt the status quo, they are sparking a revolution that is giving athletes increased power while diminishing the prevalence of coaches’ unquestioned authority.

Nowhere is that more apparent than in college, particularly in football and men’s basketball, where supercoaches are now an endangered species.

It was not long ago when they strode unquestioned across the college sports firmament. More famous than all but a few of their players, they weren’t just coaches, they were archetypes, part of a mythology in American sports that connects to the days of Knute Rockne at Notre Dame.

The annual games pitting Duke against North Carolina were billed as a test of deities — first Krzyzewski against Dean Smith, then Coach K against Roy Williams.

But Williams retired two months ago, after 48 years, suddenly and surprisingly. An avowed traditionalist, it was clear that he had seen enough of the changes shaping the future of college sports. 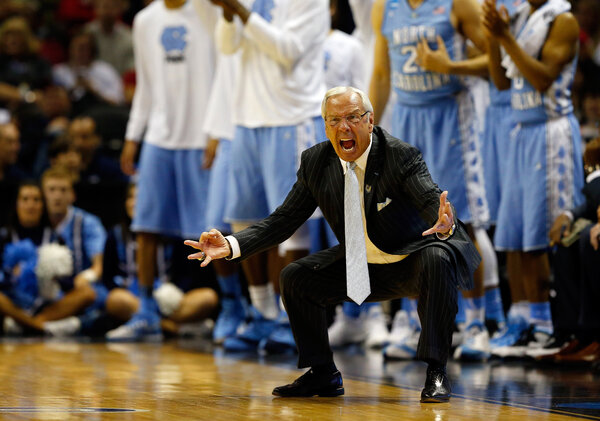 Upstart disrupter leagues such as Overtime Elite and the Professional Collegiate League are set to take on the establishment, even as the G League flourishes as a minor league alternative to the N.B.A. They are offering lucrative contracts to the best high school players — Overtime Elite offers $100,000 annually — legitimizing payments to players who have long operated under the table in the college game.

Krzyzewski earns in the neighborhood of $10 million a year, a mogul who operates atop an economic caste system that has kept the athletes unpaid at the bottom of the barrel.

Players have fought for the ability to be paid, too, and soon they will finally be able to earn significant sums by trading on their marketability as the N.C.A.A. prepares to respond to legislation sweeping the country that will allow student-athletes to profit from their name, image and likeness. Eventually they may end up getting salaries from their universities for their work on the field and court. A push continues to allow them to unionize.

Coaches have always had the freedom to walk away from their contracts for better deals at other colleges.

Now they can transfer to another school and play immediately, instead of being penalized with sitting out for a year. Baylor just won the men’s national title in basketball on the strength of players who started their careers at other universities.

What’s the supercoach take on that kind of player freedom?

“I’m old school,” said Roy Williams, considering the matter before he retired. “I believe if you have a little adversity, you ought to fight through it, and it makes you stronger at the end. I believe when you make a commitment, that commitment should be solid.”

The irony is thick. In 2003, Williams bolted to North Carolina from Kansas. He left the Kansas players he had recruited, no doubt with promises that he was going to stay put, in the rearview mirror.

Gone are the days of reeling in top players like Duke’s Grant Hill and Christian Laettner, watching them mature for four years and riding their talents to multiple national titles.

Gone, too, are the days when athletes didn’t have options. They kept complaints quiet or risked being banished to the bench, maybe for good. Today’s college athletes can take their concerns to far-flung audiences on social media or easily move to another university.

All of this makes players less likely to follow every last dictate without question. It lays siege to the kind of authority that has powered the best-known men’s coaches in the biggest college sports for over a hundred years.

In the news conference announcing his departure, Krzyzewski said his retirement had nothing to do with the swiftly evolving landscape.

Equating today’s tectonic shifts to the relatively minor changes of yesteryear — the introductions of the 3-point line or the shot clock, for instance — misses the mark.

The world of old seems quaint now. Think of the 1980s, after Krzyzewski went to Durham after coaching at West Point.

Along with Coach K at Duke and Smith at North Carolina, Jim Valvano strode the sideline at North Carolina State. Not far away, in the mighty Big East Conference, stood Lou Carnesecca (and his famed sweater) at St. John’s. Rollie Massimino was at Villanova. John Thompson at Georgetown. And a much younger version of Boeheim, now 74, at Syracuse.

Apologies to the younger generation, to the likes of Baylor’s 50-year-old men’s basketball coach, Scott Drew, but it will never be that way again. Not with the players getting in on the action, getting a share of the pie, demanding their rights.

The time is right for change. Ten years down the line, what will the landscape look like?

Nobody can say for sure, which is both exciting and daunting. But this much seems inevitable: The supercoach, secure in power, dictating the terms, firm in archetypal fame, is unlikely to still be around.