He played three years at Penn State, but with his final year approaching he had a decision to make; try to continue playing lacrosse or pursue a football career.

Hogan ended up with a near decade-long professional football career and two Super Bowls. At the end of his run in the N.F.L., an opportunity that didn’t exist when he was in college was suddenly an option.

The Premier Lacrosse League, a league operating under a touring model that plays in stadiums across North America, is entering just its third season but has already shaken the sport. After two seasons, including a bubble during the pandemic, the P.L.L. absorbed the 20-year-old Major League Lacrosse this winter.

By becoming the only option for professional outdoor lacrosse, the P.L.L. plans to build on the lore and history of the league it absorbed while focusing on its player-driven model to succeed in ways M.L.L. never did.

It’s made the league, and pro lacrosse, suddenly an attractive option for professional athletes.

“Playing professional lacrosse wasn’t on my radar,” said Hogan, who is now on the Cannons roster in his first season in the league. “The P.L.L. continuing to grow as much as it is, guys are really going to start making this decision. It’s going to make it a difficult decision and that’s a good thing.” 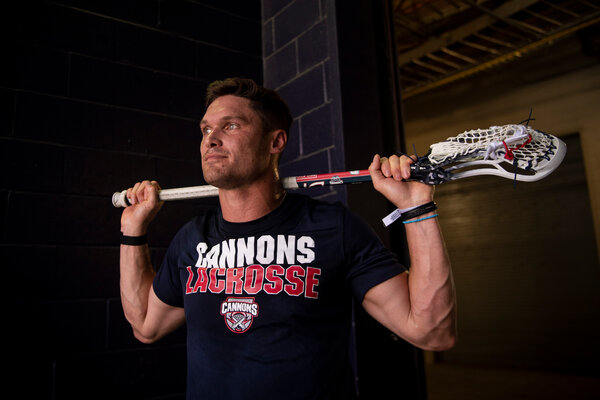 Dalton Crossan had spent two years in the N.F.L. on the Colts and Buccaneers’ training camps before a stint in the Canadian Football League. As soon as he was ready to move on from football, he knew the P.L.L. was his next move.

A Long Island native, Crossan played lacrosse in high school and had several friends in the P.L.L. who encouraged him to try out for a team. He intended on cracking a roster in 2020 before the pandemic took hold and decided to give it more time.

“When I made the decision, I went all in,” he said. “I was away from football and missed playing competitively on the field. I started giving it serious thought and talked to my parents and family and thought it might be something I wanted to try.”

Crossan hadn’t played the sport competitively since high school. He went to play football at the University of New Hampshire and for years thought he was done in lacrosse.

Hogan had a similar path, albeit with more N.F.L. success. He did not expect to play lacrosse at a high level again after he left Penn State, though he stayed involved with the sport in other ways. He invested in the P.L.L. upon its launch and started thinking about giving it a go on the field when he knew his football career was ending.

“In the back of my mind a few years ago I thought it would be a cool opportunity,” Hogan said. “I feel healthy physically, I feel great right now. I thought, why not go back into a sport I haven’t done in a while, but I still really love.”

Lacrosse has long been a secondary passion for many elite athletes. The N.F.L. Hall of Famer Jim Brown dominated the sport at Syracuse, and Stanley Cup winner Joe Nieuwendyk and the N.H.L. legend Wayne Gretzky were strong in the indoor game.

Since the inception of professional sports, though, lacrosse hasn’t been a viable option as the main career path for dual-sport athletes. Instead, athletes would pursue the major-league versions of other sports for higher salaries.

P.L.L. salaries still aren’t in the same neighborhood as those in N.H.L., averaging $35,000 in the 2021 season, according to the league. The average M.L.L. salary in its final season was $8,000. The P.L.L. has tried to entice prospective players to join the league by offering stocks in the league, and a player-driven platform that’s unusual in men’s pro sports.

The league was originally born out of labor disputes with Major League Lacrosse. The league founder, Paul Rabil — who still plays in the league — had the goal of making professional lacrosse a legitimate platform in the sports world.

“Back in 2017 we were hoping we could invest in M.L.L., and that could come in a number of different ways,” said Rabil, who led the leagues’ merger in December. “We wanted to rebuild and deconstruct Major League Lacrosse, then decided to go on this path which was more disruptive which was launching a competing league.”

The risk paid off in a way it usually doesn’t. Almost every legacy league has swallowed up its competition; the N.H.L. beat out the World Hockey Association, the N.B.A. absorbed the American Basketball Association, even the old A.F.L. and N.F.L. and American League and National Leagues merged. This time, the P.L.L. branding won out.

The P.L.L. owned the media rights deal with NBC, something pro lacrosse has never had. Its predecessor had games sporadically broadcast on ESPN2 over the years, but most of its games in the past half decade were behind online paywalls.

Accessibility to the sport at the pro level has changed the conversation, which has allowed lacrosse to take another step toward becoming a competitive, if not major, sport to attract top athletes.

“If you’re in a position where you’re deciding, you’re one of the elite athletes in the world already,” Hogan said. “I think guys are really going to consider it. That’s going to help the sport.”

Years removed from playing competitively, Hogan had no guarantees he’d be a given a shot at a team when he declared for the league this season. The league’s first event of the year was at Gillette Stadium, Hogan’s former football home with the New England Patriots.

He and Crossan feel like they can use the lessons they learned from the professionalism of the N.F.L. to increase the profile of the league.

“Just as a league they’re unbelievably impressive,” Crossan said. “I think the professionalism compares with all the major leagues. In my opinion, there’s never been as much excitement around lacrosse.”

That’s not to say there aren’t still challenges ahead; pro lacrosse has existed in North America since the 1970s, but only M.L.L.'s run from 2001 to 2020 was a successful outdoor option. The roadblocks existed partially due to a lack of resources, but the growing pains have also come because the sport has yet to break into the mainstream.

Without M.L.L. as a competing option and a fracture in the pro game, all the pressure is on the P.L.L. to carry the weight of representing the entire sport. It has been only two full seasons, including one that was heavily intruded upon by the coronavirus pandemic, which has shaken many mid-to-small professional leagues that have been around for a lot longer.

So far the league has taken it in stride, increased its profile and swallowed the competition. Some of the top athletes in other sports who have cheered on the success of lacrosse from afar have sought ways to be involved, now on the field, too.

They’re hoping not only to succeed with their new teams, but to help guide the league to a stronger era of mainstream lacrosse than has ever existed.

“The caliber of players in this league, they are the best in the world,” Hogan said. “I think that’s what’s so exciting about this sport. Every single team is filled with All-Americans, guys who won championships, guys who have won in indoor. The talent from top to bottom, competing with these guys is going to be incredible.”