CLEVELAND — C.C. Sabathia was scheduled to be a starting pitcher at Progressive Field on Saturday for the 125th, and probably last, time in his career. This season, his 19th, is also his final one. Way back when, he made his major league debut in Cleveland as a hard-throwing 20-year-old on April 8, 2001.

“It just feels so comfortable to be in this park,” Sabathia said on Friday. “Coming up here and being here for so long and just knowing where everything is in the stadium. It’s like home.”

Even though Sabathia has not worn a Cleveland Indians uniform in 11 years, and has been a Yankee since 2009, the fact that he started out here still means a lot to him. He was an Indians first-round pick in 1998. He spent the first seven and a half seasons of his career with them, winning a Cy Young Award in 2007 and making three All-Star Game appearances. Three of his four children were born in Cleveland.

“This place is special to them,” said Sabathia, whose family was expected to be in attendance on Saturday.

There is at least one way for Sabathia to make one more appearance on the Progressive Field mound this season: to play in the All-Star Game here on July 9. All-Star Games, after all, are celebrations for fans, so why not celebrate Sabathia?

He entered Saturday with a 3-2 record and 3.61 earned run average over nine starts. He has served two stints on the injured list this season because of his degenerative right knee — and might need more time off in the months ahead for rest and treatment because it even hurts to walk. So while other pitchers will be more deserving of an All-Star selection based on performance, none would have Sabathia’s significance.

He also entered Saturday with 249 career victories. Only 13 pitchers in baseball history have won 250 games and struck out 3,000 batters. When he reached the strikeout milestone last month, Sabathia became the 17th pitcher — and only the third left-hander — to do so.

And in a sport that has seen the number of black players fade over the decades, Sabathia is just the third with 3,000 strikeouts, joined by Bob Gibson and Ferguson Jenkins.

Given all this, some of Sabathia’s teammates believed it would be fitting to see him back in Cleveland for the All-Star Game. 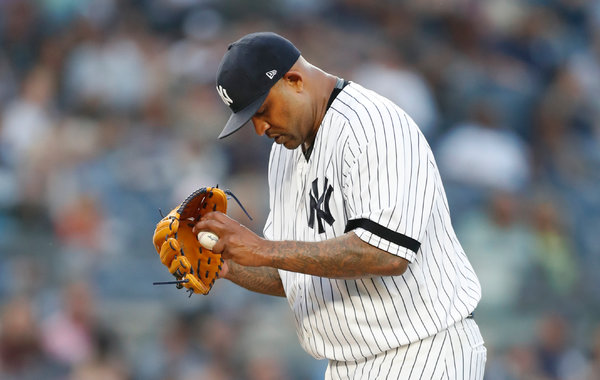 “It’d be more of a gesture for a guy who has had a Hall of Fame career type of thing,” Yankees relief pitcher Zack Britton said. “That would be nice and cool.”

Even if reached that far, center fielder Aaron Hicks said Sabathia would have to feel comfortable taking part.

“C.C. has a big thing about honoring the game,” Hicks said, adding: “He doesn’t want to be a guy that takes somebody’s spot. But I think it would be cool.”

Although the format has changed, fans still vote for All-Stars. Pitchers and position player reserves will be chosen through a combination of player voting and choices by Major league Baseball.

In his 20th and final season, Derek Jeter, a presumptive Hall of Famer, was voted into the 2014 All-Star Game by fans despite hitting .272 with a pedestrian .647 on-base plus slugging percentage in the first half of the season. Mariano Rivera, elected to the Hall of Fame this year, was more deserving of his All-Star selection for his on-field play in his final season: He had a 1.83 E.R.A. in the first half in 2013.

“Nobody has ever said anything to me about it,” Sabathia said when asked about the possibility. “But yeah, if that was something the league would want and the players would be for it, that’d be awesome.”

Ideally, though, Sabathia may prefer the four days off in July to spend time with his family and rest his knee. He has pushed through the pain because he wants to win. When asked if he was sentimental about his potential final game in Cleveland on Saturday, Sabathia deflected. “We’re trying to win every day, so there’s really no room for none of that mushy stuff,” he said.

Still, Sabathia made time to relive some of his past. On Friday, he recounted memories of past teammates and experiences that made him who he is today. He saw familiar stadium staff as he walked around Progressive Field. As he has done throughout his final season, he spoke to children from a local Boys and Girls Club, which he attended as a child in Vallejo, Calif., his hometown.

He stopped by his favorite place to eat — Dave’s Cosmic Subs in Westlake, Ohio, just west of Cleveland — for an Italian sub before Friday’s game. He visited his old house and caught up with some past neighbors. An outdoor basketball court Sabathia’s late father built there made him nostalgic.

“That court still being up means a lot because he worked on that so hard,” he said. “And it was a big deal that he was able to do that and the fact that it’s still there was pretty cool.”