MIRAMAR, Fla. — Upon graduating from the University of Tennessee last month, Khadija Shaw allowed herself a quiet moment of self-congratulation. She was the first in her family to receive a college degree. She had persevered through tragedy, having lost three brothers to gang-related violence in Jamaica and a fourth to a car accident. And now she was headed to the Women’s World Cup with Jamaica’s Reggae Girlz, with a chance to become a breakout star.

World Cups have a tendency to produce breakout stars, players who previously performed under the public’s radar but who, given a global stage and a moment in the spotlight, suddenly burst into the broader public consciousness. Shaw, a goal scoring force on a team appearing in its first World Cup, could be this year’s model.

At 5 feet 11 inches, Shaw is sturdy and strong at forward, but also quick and inventive, with a spontaneity developed from playing pickup soccer with boys in Spanish Town, Jamaica, outside Kingston, the capital. 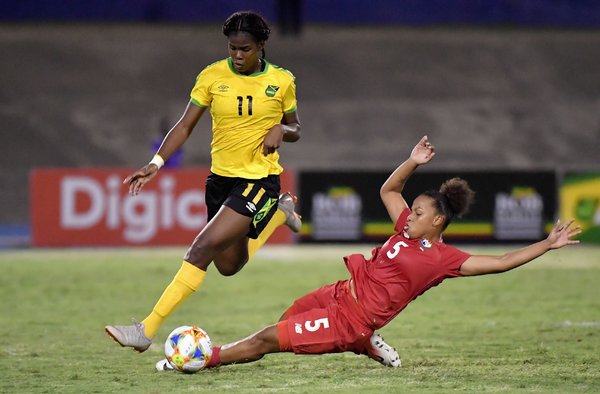 “She can play four feet tall and 10 feet tall,” said Hue Menzies, Jamaica’s coach. “You can’t teach it. She’s got the technical ability to do a lot of things women her size don’t do. Being in the streets does that.”

Pensky called Shaw “the Zion Williamson of soccer,” a reference to the former Duke basketball star who entranced the nation last season as a freshman with a guard’s deftness and a forward’s body.

Several weeks before Shaw graduated from Tennessee with a degree in communications, the United States State Department issued a travel advisory for Spanish Town, warning American tourists not to visit, saying, “Violence and shootings occur regularly.”

It seems harsh to reduce the history of a place to a warning to stay away. Spanish Town is a former capital of Jamaica, home to one of the oldest Anglican churches outside England. But there was grim resonance for Shaw in what the advisory cautioned.

Three of her brothers have been shot to death. In August 2017, the day Shaw went to Tennessee from a junior college in Florida, one of her cousins was wounded in Spanish Town in a drive-by shooting but survived, Pensky said. A friend said that Shaw grew reluctant to answer her phone, fearing more bad news on the other end every time it rang.

“Her life could have gone a whole other way,” Pensky said.

At one point, Shaw briefly considered giving up soccer and returning home to her family. But, she said, the sport brought her comfort and solace.

“It frees me up,” she said. “I don’t think about nothing when I’m on the pitch other than I really want to win. I’m free, relaxed. I don’t really focus on anything. I use it as motivation to keep going.”

Fans may still be getting to know Shaw, but top clubs are not. Multiple news outlets reported on Thursday that she had signed a two-year contract with F.C. Girondins de Bordeaux in the thriving French women’s league. She has been on this path since elementary school, playing in her front yard, or in the street, in Spanish Town with her brothers and other boys from the neighborhood. It was a dangerous place, she has acknowledged. Sometimes while walking home from practice, she once told The Knoxville (Tenn.) News Sentinel, she would saunter into crime scenes. Yet amid the danger, she said, her sport provided an oasis.

At 7, she began playing pickup soccer against boys as old as 15 or 16. They believed in her, she said, and told her she would be the future of the troubled community. They did not try to hurt her when they played in the yard or in the street, she said. Still, she asked them “to play me rough” because she wanted to be familiar with the muscularity of soccer when she got older and the games became formal and meaningful.

Until the Reggae Girlz, as Jamaica’s national team is known, became the first Caribbean nation to qualify for the World Cup, women’s soccer had been largely dismissed in Jamaica. Many considered it too rough and unfeminine. But at a young age, Shaw began to kick anything that would roll. Bottles. Stones. Boxes. Bags. Figurines. The remote control. Sometimes she played barefoot, and sometimes — when her mother was not home — she even played in her dress shoes.

“My mom would always get mad,” Shaw said with a laugh. “But she and my dad realized this is what I really wanted.”

One criticism of American soccer is that it is too organized, that athletes don’t play enough on their own, away from coaches, the way they do in basketball. Creativity can suffer, the theory goes. That is not the case for Shaw, who relied on ingenuity and inventiveness to succeed on makeshift fields, against boys who were bigger and faster. It is evident in her intuitive style, the way she wheels on a shot while facing away from the goal or cheekily chips a lob over a goalkeeper. The way she seeks contact, which Menzies, the coach, is seeking to lessen as a way to keep her from repeatedly being injured.

“She depends on her size to hold off defenders, but she’s got to separate quicker so it won’t be so combative all the time,” Menzies said. “She’s got to save her career.”

By age 14, Shaw was playing on Jamaica’s under-20 national team. In high school, she collected 128 goals and 72 assists. Last fall at Tennessee, she scored 13 goals in 15 games and was named the Southeastern Conference’s offensive player of the year. Now she has arrived at the World Cup.

“Bunny’s been through a lot of adversity,” Menzies said. “She knows she’s on a path to greatness. In the neighborhoods, soccer’s an opportunity to have a little bit of joy. Football is a cure. She’s part of that.”