JUST a week ago, he had looked like a drowning man – out of his depth in his maiden managerial role and sinking towards a relegation battle.

Suddenly Mikel Arteta finds himself cast as an inspirational decision-maker, sending on Alex Lacazette, who struck after just 21 seconds and propelled Arsenal towards back-to-back victories. 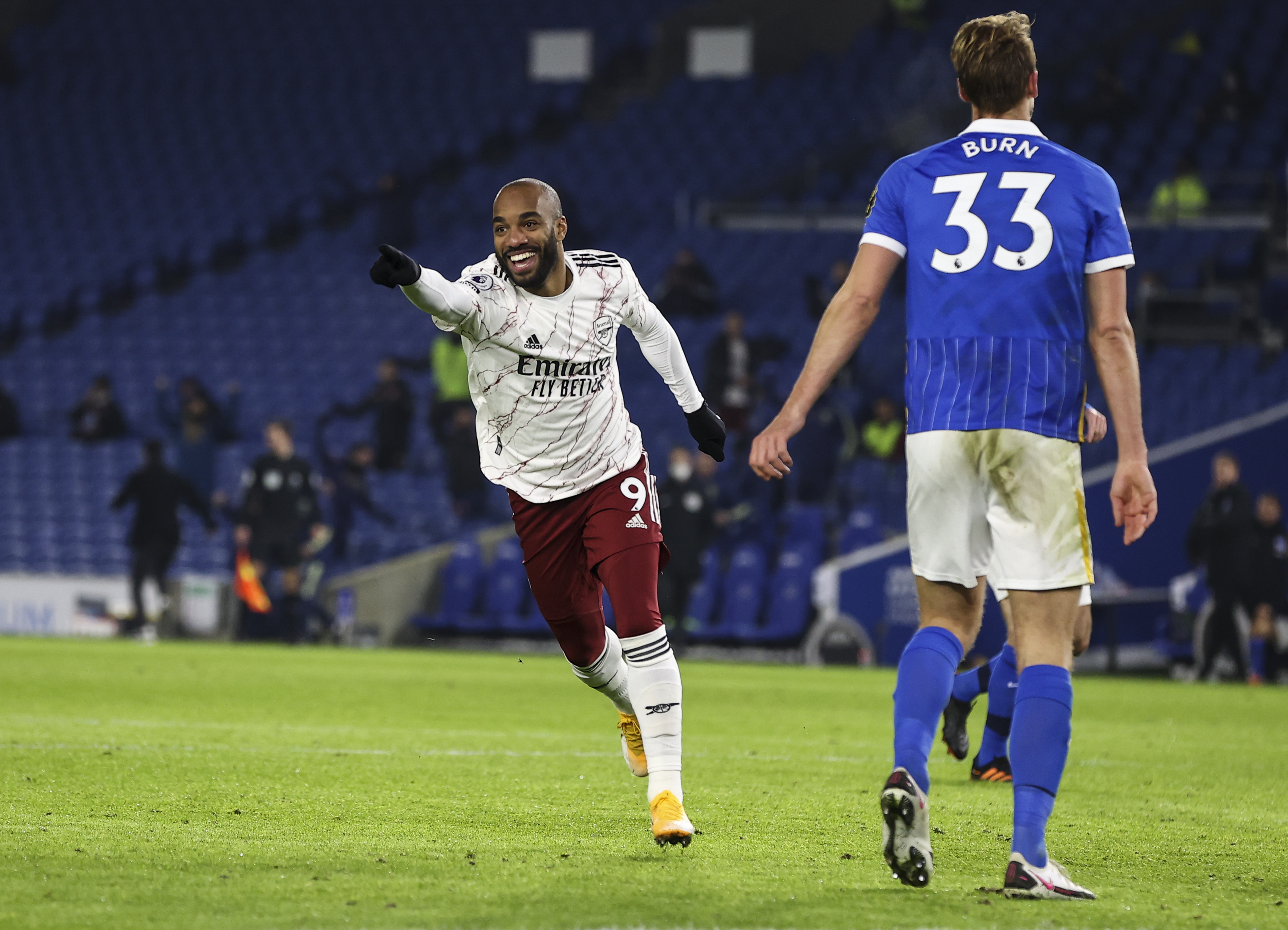 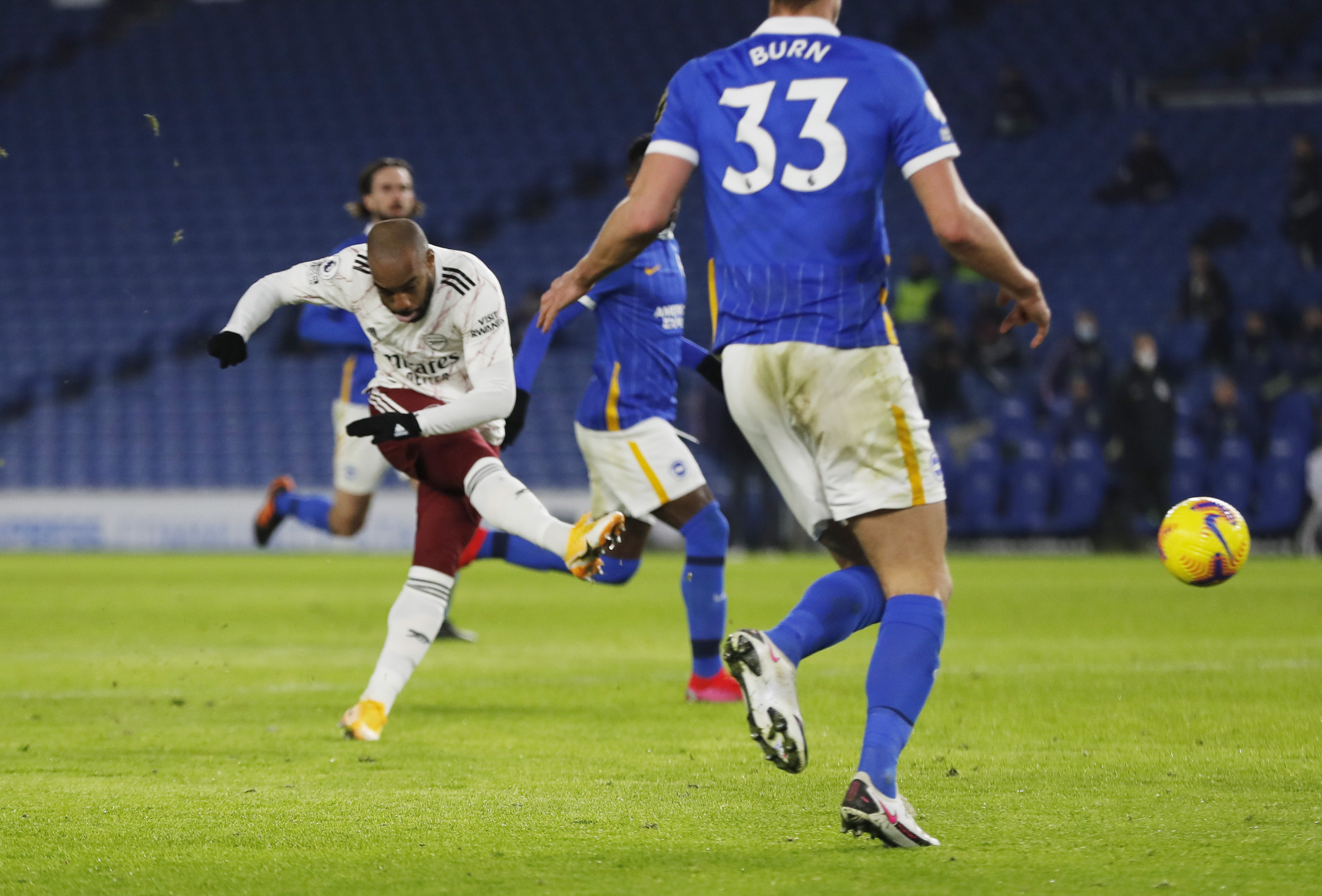 Arsenal’s revival is a spluttering one – they were awful in the first half against a struggling Brighton side, who started without a recognised striker.

But they had gained the ascendancy before Lacazette replaced Gabriel Martinelli and drilled in the winner – the fastest Premier League goal by a sub this season.

Arteta’s men are heading towards mid-table at least – and while that will never be enough, they have turned a corner and have winnable fixtures against West Brom, Crystal Palace and Newcastle next.

For Brighton, this was a 12th straight home match without a win, and they are becoming marooned in the bottom four, just two points above the drop zone.

Seagulls boss Graham Potter picked a strange old team and paid the price, despite seeing his side shade the opening 45 minutes.

This had looked like being a genuine relegation six-pointer until Arsenal, inspired by youth, roused themselves to defeat Chelsea 3-1 on Boxing Day and end a seven-match winless league run.

Emile Smith Rowe, Martinelli and Pablo Mari made their full Premier League debuts in that mood-altering win and kept their places here – Pierre-Emerick Aubameyang replacing Lacazette in the only change to Arsenal’s starting line-up.

Yet the Seagulls have been Arsenal’s bogey team – unbeaten in their previous five against the Gunners, winning three of them. 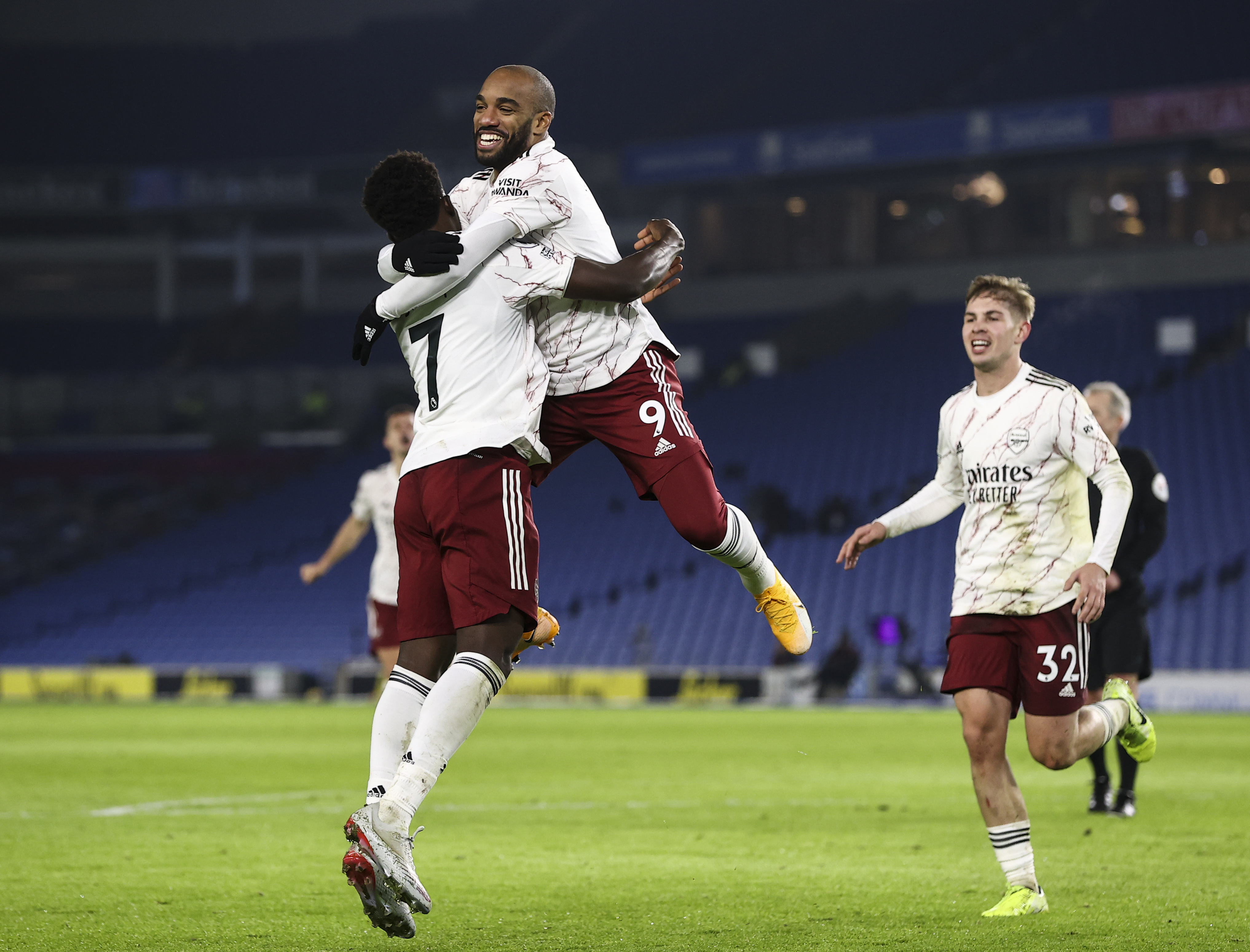 And last season’s post-lockdown visit to the Amex resulted in a meltdown from Matteo Guendouzi which saw the Frenchman bombed out by Arteta.

But that dramatic encounter in June brought Brighton’s last home league victory – a dismal run which puts Potter under serious pressure, despite all the plaudits he has received for his team’s playing style.

The Seagulls are without a win in seven, after Potter made six changes to the side which earned a decent point at West Ham.

There was no specialist striker in Potter’s wheel-spinning line-up yet they carved out the first couple of openings – Ali Jahanbakhsh skying a shot from Bernardo’s cross and Dan Burn heading over from an Yves Bissouma centre.

Arsenal were being successfully smothered, Aubameyang isolated, and Bernd Leno was forced into some emergency ball-juggling as Brighton pressed high.

Granit Xhaka, who had scored a free-kick against Chelsea, was narrowly over with an effort from the right-hand edge of the area.

But when Mohamed Elneny was dispossessed on the edge of the area, Alexis Mac Allister blazed just over with the Seagulls beginning to get on top. 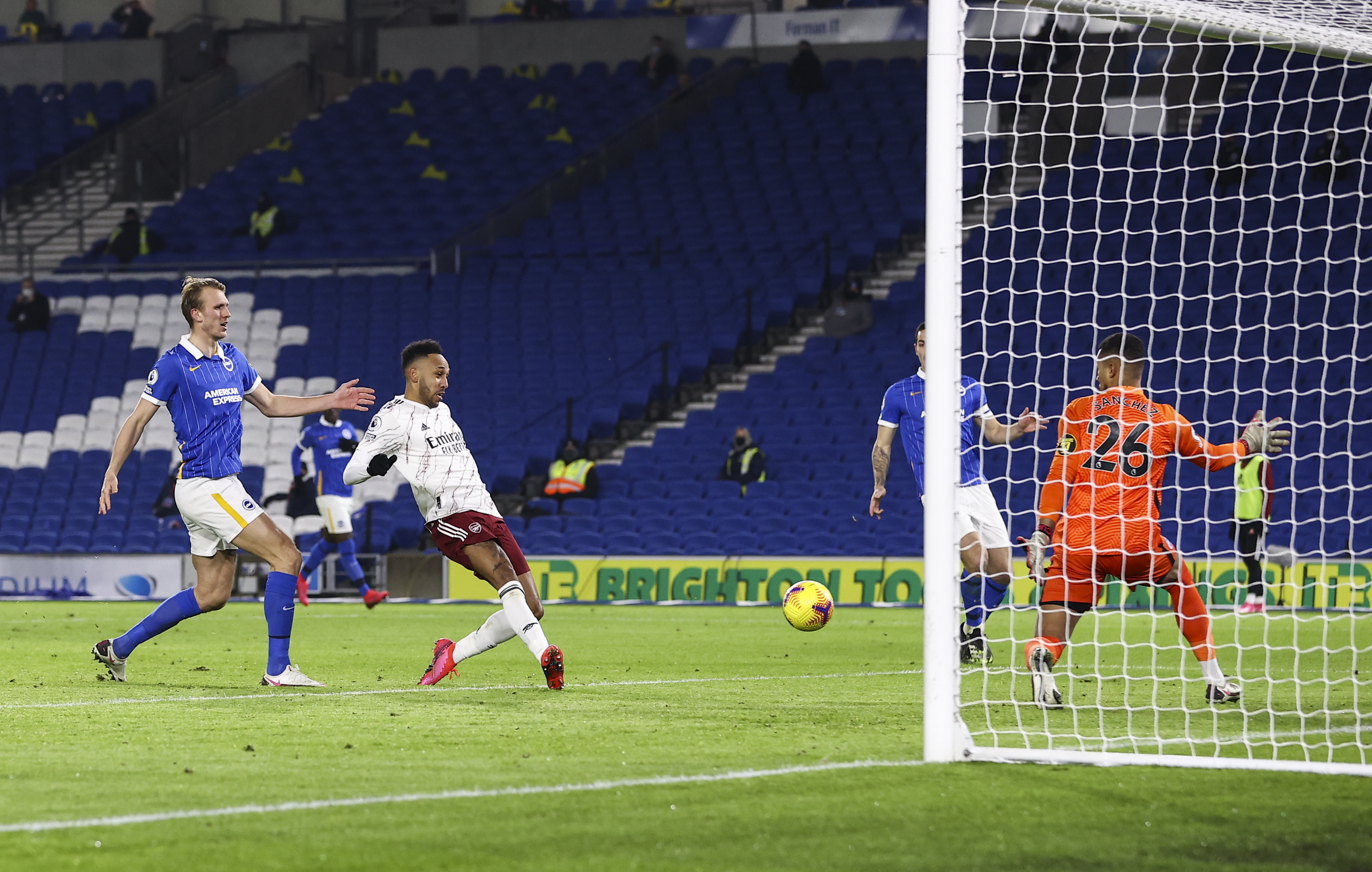 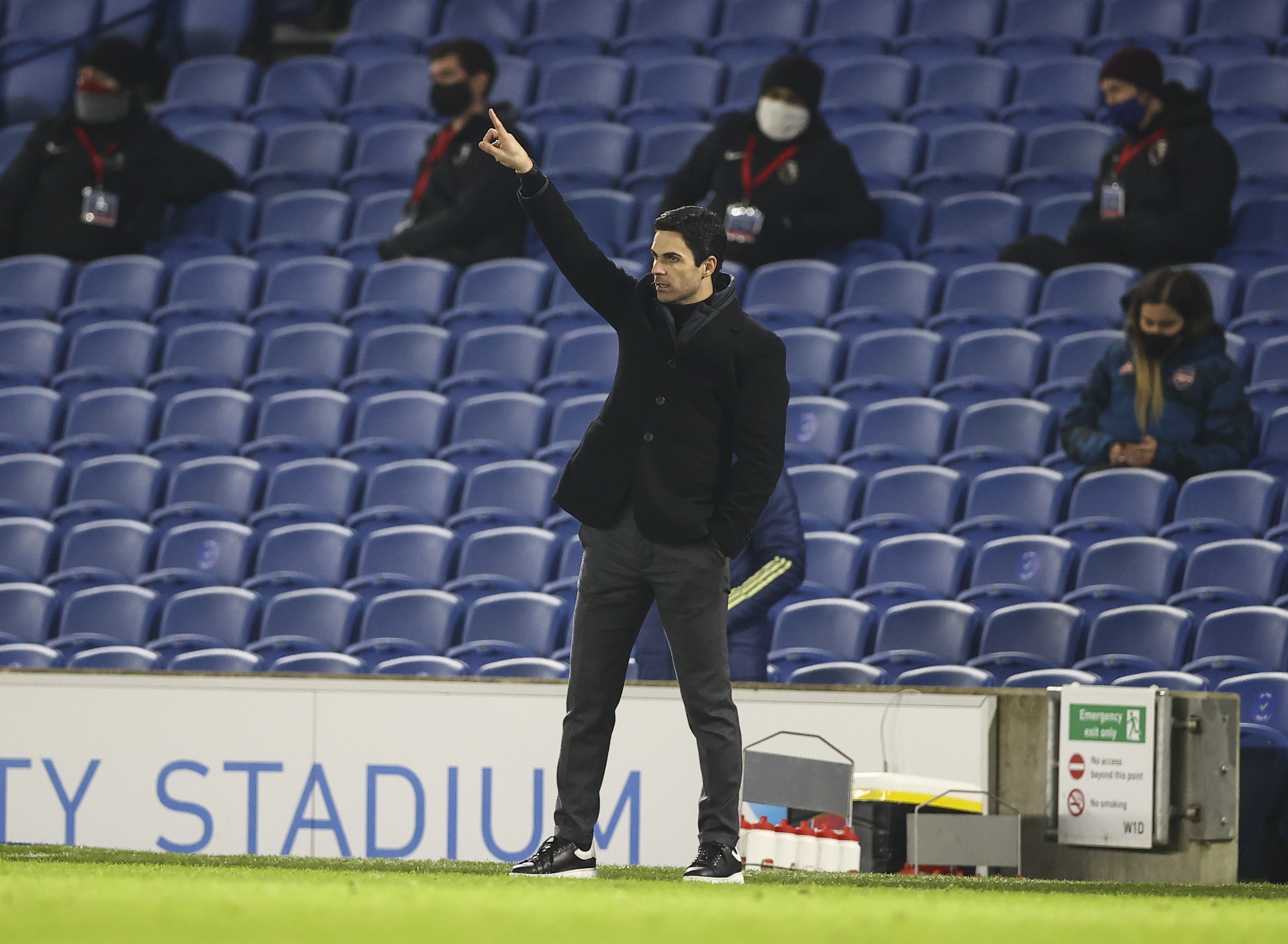 Jahanbakhsh then forced a fine save from Leno, plunging low, with his back four looking chaotic in the build-up.

It was the only shot on target in a miserable first half but Brighton forced a corner straight from the restart and Arsenal survived a VAR check after Lewis Dunk claimed he had been fouled.

Then Arsenal finally threatened, breaking at pace for Bukayo Saka to zip in a cross and Aubameyang denied by a brilliant point-blank save from Robert Sanchez.

The Brighton keeper had done well to fight off the frostbite and the brain-freeze after a redundant first-half.

Arteta’s kids then joined the party, Smith Rowe feeding Martinelli, whose rising shot rose a little too much.

There was far greater intent and conviction from Arsenal now – with Smith Rowe and Saka especially lively.

Brighton were not done as an attacking force, though and Joel Veltman fed Davy Propper, whose shot forced Leno to save at his near post.

But on 66 minutes, Arteta introduced Lacazette and the Frenchman promptly netted with his first touch.

Saka surged down the right and cut back for Lacazette, in space, to curl a powerful shot past Sanchez – his third in as many games.

Arsenal had plenty of defending to do but they survived without serious scares.

Arteta can start to breathe again – dry land is in sight.