Brazil’s Filipe Toledo won the Oi Rio Pro Saquarema for the fourth time on Tuesday, scoring a perfect 10 in the final against young countryman Samuel Pupo to cement his spot at the top of the world championship tour ratings.

Toledo has made five of the eight man-on-man championship tour finals this season and never looked likely to miss out at the home country event he has commanded in recent years. 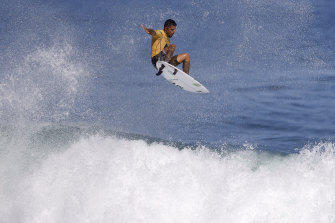 His razor-sharp turns and unmatched ability to land progressive aerial manoeuvres made him a favourite with the big home crowd, who roared in approval when he made a big full rotation air early in the final.

Brazilians dominated the men’s side of the contest at Saquarema, a beach town about 100km east of Rio de Janeiro, taking all four semi-final berths for the first time in a World Championship Tour event.

Hawaii’s reigning world and Olympic champion Carissa Moore also almost notched up a perfect wave herself against France’s Johanne Defay, leaving it until the last minute in their final.

Trailing on the scoreboard with the clock winding down, Moore took off and blasted two big backside turns on a solid overhead wave, scoring a 9.5 out of 10 to snatch the win.

“I think this has to be one of my favourite wins of my whole career and one of the most meaningful,” the five-time world champion said. “Coming up against my really good friend Johanne Defay, I respect her so much, she got me at [the previous event in] G-Land, and I really feel like she’s the one to beat this year.”

The tour heads next to the long right-hand point break of Jeffreys Bay in South Africa, before the huge challenging barrels of Tahiti’s Teahupo’o for the final event of the regular season.

Both Moore and Toledo have now guaranteed one of five spots for the end-of-season, one-day finals event to be held at Lower Trestles in Southern California in September.

Toledo lives just up the road, and was narrowly beaten by countryman Gabriel Medina at the final there last year, making him a favourite to win his first world title this year.

Sports news, results and expert commentary. Sign up for our Sport newsletter.