Angelique Kerber was all dressed up with nowhere to go.

It was Kerber’s 33rd birthday, and the German tennis player was stuck in a hotel room in Melbourne, Australia, on Jan. 18 unable to even open the door for more than the time required to grab a bag of food left outside.

But rather than mope about her inability to celebrate, or even to practice for the Australian Open because of a strictly enforced two-week quarantine, Kerber decided to make the best of it. So the 2016 Australian Open champion videotaped herself donning a fancy party dress, dipping strawberries in chocolate, opening a bottle of champagne and dancing around the room, all by herself.

Because of the pandemic, athletes in Australia and around the world have had to make major adjustments to earn a living. Tennis players, who spend their lives on airplanes and in hotels, are among the most vulnerable. 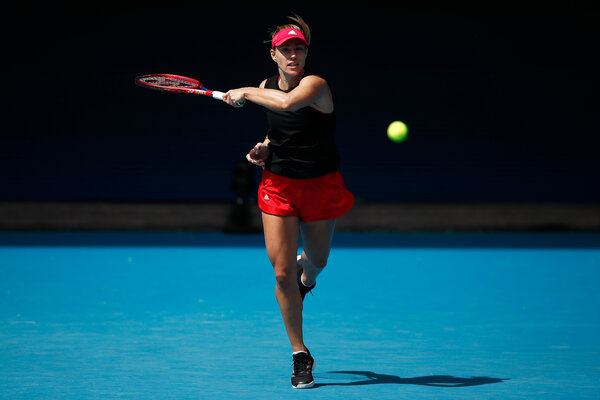 “These days, traveling is just an absolute nightmare,” said Reilly Opelka who, at 6-foot-11, struggles on long flights during the best of times. “With Covid, tests, quarantining and paperwork, it’s the biggest headache.”

A year ago, the Australian Open was hit by the environmental effects of bushfires that ravaged the country. At Melbourne Park, where the tournament is played, haze and smoke from the nearby fires left some players gasping for air during their qualifying matches.

If 2020 was jarring, the 2021 Australian Open, postponed by three weeks from its customary summer dates, seems apocalyptic.

“Last year feels like 10 years ago,” said Rajeev Ram, who won the Australian Open men’s doubles title last year with Joe Salisbury. “Not only did we have the bushfires last year, but we had our first inklings that the coronavirus was becoming significant because some of our Chinese players weren’t able to go home. That now feels like forever ago.”

This year, Ram was confined to his hotel room for 14 days from the moment his chartered flight from Los Angeles landed in Melbourne on Jan. 15. His coach, physiotherapist and Salisbury were just steps away in other single rooms, but physical contact was prohibited.

Planes were just 20 percent full to allow for social distancing, and players, coaches and support staff members were tested for Covid-19 before takeoff. Players would quarantine for two weeks, though they were allowed out of their rooms for a total of five hours per day to practice, do physical training and eat at the tournament site.

The intent was to keep everyone safe, including Australians, who have endured strict lockdown mandates. With Covid-19 positivity near zero in the country, fans are permitted to attend the Australian Open, though in limited numbers. Tickets are available for one of three zones, each containing one of the show courts, but fans are required to stay within their specific zone for the duration of the session.

Andy Murray, a two-time Wimbledon champion, never got on the plane because he tested positive before leaving home, as did Madison Keys, the 2017 United States Open runner-up. Amanda Anisimova tested positive in Abu Dhabi and didn’t recover in time to travel to Melbourne. Roger Federer is still recovering from knee surgery that forced him to sit out most of 2020. All of those players have officially withdrawn from the tournament.

John Isner, the top-ranked American man, also withdrew, as did Rafael Nadal’s coach, Carlos Moya. Nicolas Massu, who coaches Dominic Thiem, tested positive right before his departure and will not attend the tournament.

While some players continued to practice throughout their quarantine, others had their tournament preparation upset when nine players on three flights tested positive for the virus upon arrival in Melbourne, including three nonplayers with the more contagious variant first found in Britain. That forced everyone on the three planes, including 72 players and hundreds of members of the support staff, into a complete lockdown for two weeks.

While some players pushed hard against tournament and health officials (Roberto Bautista Agut likened it to being in jail while others held signs up to the windows proclaiming, “I need to practice” and “I need air to breathe”), others took their confinement in stride.

Aryna Sabalenka challenged friends to a window-volleying competition, while several players hoisted their beds up against the wall and turned them into makeshift backboards. Opelka and Tommy Paul had a staring contest on Facebook Live, and Pablo Cuevas donned a bathing suit and pretended his bed was a surfboard.

Novak Djokovic, who has won the tournament eight times, also was criticized when he sent a letter to the tournament director, Craig Tiley, demanding that players in quarantine receive a reduced sentence, better food and exercise equipment in their hotel rooms. He even asked that some players be moved to houses with private tennis courts. As it is, Tennis Australia paid millions for the players’ travel, hotel and meals, at one point raising the per diem from $100 to $200.

Let Us Help You Better Understand the Coronavirus