Australian rider Caleb Ewan slalomed through the bunch to win a sprint finish and claim the third stage of the Tour de France on Monday.

Julian Alaphilippe held onto the yellow jersey that he claimed with a dramatic stage victory a day earlier. 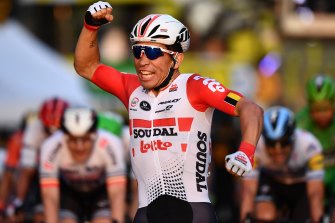 With about 100 metres to go, Ewan trailed five other riders before slinging himself through a narrow slice of road near the advertising barriers. Then — after more than five hours in the saddle — Ewan darted to the left to overcome Sam Bennett and claim his fourth career stage win in the Tour by more than a wheel.

"I found my way through the wheels," Ewan said. "Coming from behind, it's a bit of a risk, but I found my way along the barrier and I came with a lot of speed and it worked in the end."

Bennett crossed second and Nizzolo came third — both with the same time as Ewan.

Ewan, who rides for the Lotto-Soudal team, won three stages last year, including the coveted final leg on the Champs-Élysées in Paris.

Alaphilippe crossed with the main pack and retained a four-second lead over Adam Yates, with Marc Hirschi still third overall, seven seconds behind.

After the opening two stages in the Mediterranean city of Nice, the race veered inland over a 198-kilometre route to Sisteron, which is labelled the "Gateway to Provence".

The route featured four minor climbs before a flat finish suited to sprinters.

Three French riders — Anthony Perez, Jérôme Cousin and Benoît Cosnefroy — broke away at the start and established an advantage of nearly three minutes.

Cousin then launched a solo attack midway through the stage and created a lead of more than four minutes.

Cousin was finally caught by the main pack with 16 kilometres remaining.

Perez, meanwhile, crashed into his team car on a high-speed descent after puncturing a tire and broke his left collarbone — forcing him to abandon the race.

It was an especially unfortunate accident for Perez, since he had already gained enough points to don the polka-dot mountains classification jersey after the stage.

Stage 4 on Tuesday features the race's first uphill finish with a climb to Orcières-Merlette that should force the overall favourites — such as defending champion Egan Bernal — into action.

The three-week Tour, which was postponed from its usual July slot due to the coronavirus, ends in Paris on September 20.