Only “Armageddon” can stop the Tokyo Olympics taking place this summer, a senior official has declared amid mounting COVID-19 fears.

Dick Pound, a long-serving International Olympic Committee member, made the outspoken remark as one of Japan’s largest newspapers called for the Games to be cancelled. 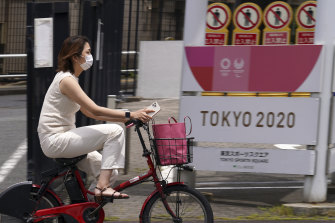 The Tokyo Games are scheduled to begin in less than two months.Credit:AP

With local opposition higher than ever after a week in which America warned against travel to Japan, the Asahi called for cancellation in an editorial, citing risks to public safety and strains on the medical system.

“We ask Prime Minister [Yoshihide] Suga to calmly and objectively assess the situation and decide on the cancellation of the event this summer,” said the paper, a left-leaning daily often critical of Suga’s ruling Liberal Democratic Party. “We are far from a situation in which everybody can be confident they will be ‘safe and secure,’” the paper added, invoking the government mantra about the Games. “Sadly, that is not the reality.”

Polls have shown the majority of the public is opposed to tens of thousands of athletes and officials descending on a country that has mostly remained closed to foreigners since last year and where vaccinations have proceeded slowly. Already foreign spectators have been banned, with a decision over Japanese fans expected next month.

“Things are properly being managed,” he said. “We as board members understand that we need to communicate that to Japanese people in the general public. We need to be more mindful in how we can communicate what you are doing to [those] outside Tokyo 2020.”

Much of Japan, including Tokyo, remains under a third state of emergency that is expected to be extended beyond this month, and although Japan has been spared the ravages of overseas nations, it has struggled to control a fourth wave of infections across the country. Just over five per cent of the population has received vaccinations, and the country has recorded about 719,000 infections and 12,394 deaths.