‘Painfully dumb’: Alexis Lalas is mocked on social media for saying soccer would be better with 35-yard shootouts instead of penalties, two points per goal outside penalty area and kick-ins replace throw-ins

American soccer commentator Alexi Lalas was roundly mocked on Twitter after suggesting a seven-item list of suggestions to make the sport better, including two points for goals outside the penalty area and a hockey ‘penalty box’ to discipline players.

Lalas posted the tweet on Wednesday morning and it quickly backfired, with over 2,000 (largely negative) replies and more than 1,800 quote tweets.

‘How would improve ⚽️? Examples:’ he said. 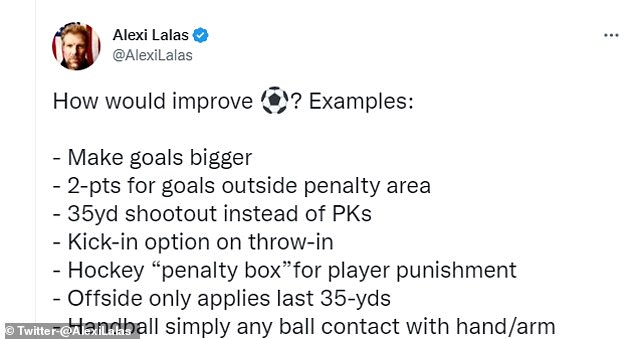 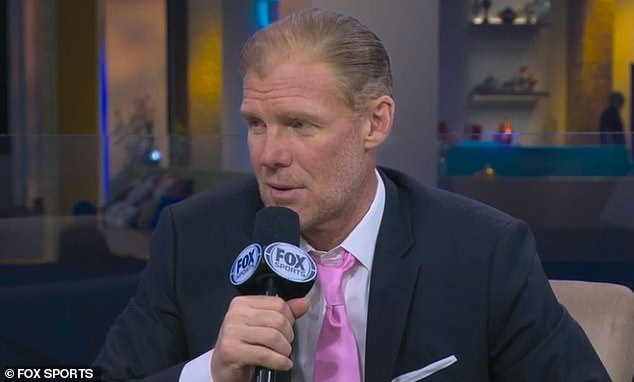 Lalas was part of the FOX World Cup coverage in Qatar

Fans vehemently disagreed with the former USMNT player, as Lalas was told to stay quiet on the matter by supporters.

‘Just leave it alone. [None] of your ideas hold water. 2 goals for long efforts, do me a favour, why are you obsessed with changing a game we have loved for years and [you’re] just joining in now,’ one said.

‘Just shut up. You played in the world cup and you have worse football knowledge that my uncle who’s never watched a match. This s*** is why we’re a laughing stock in the Football world,’ another said in an apparent reference to the USA.

A different supporter offered a simple suggestion: ‘Football would improve if you stopped being a part of it, to be quite and completely honest.’

Lalas was a part of FOX’s (often-criticized) World Cup coverage, and would have presumably seen the stunning final between Lionel Messi’s Argentina and Kylian Mbappe’s France.

Argentina won the final on penalties with Messi finally getting his hands on the World Cup, while Mbappe scored the first hat trick in a World Cup final since Geoff Hurst for England in 1966.

It has even called by many fans as one of the best games ever – and one Twitter follower fan reminded Lalas of how goof the game was.

‘Mad that anyone could watch the World Cup final recently and think that the sport needs fundamental change to make it more exciting,’ he said. 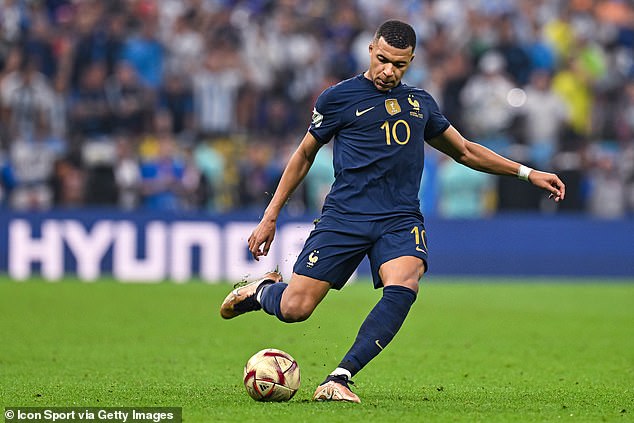 At least two other supporters suggested Lalas was looking to the wrong sport for what he wanted to see.

‘Bro just play Mario Strikers,’ one said in a reference to the popular video game. ‘It sounds like you would enjoy indoor soccer like MASL or MLIS.’

While Lalas’ ideas did not go down well, there is precedent for at least one of them.

MLS used to do 35-yard shootouts in the league’s earlier days, with the format being eliminated in 1999.

Some fans who replied to Lalas in earnest voiced their support for a change to the current shootout format, with several wanting to see a ‘golden goal’ system reinstated, while some others broadly agreed with changing the offside rules.

Lalas played for the United States for seven years, from 1991 until 98 and won 96 caps for his country, scoring 10 goals.

He spent the majority of his club career in the US and was president of Los Angeles Galaxy when they signed David Beckham in 2007.