He's just glad he did.

For years, Nicklaus would be in the TV tower adding colorful and insightful commentary as the telecast of the tournament he hosts, the Memorial at Muirfield Village, drew to its close on Sunday.

But one year, it occurred to Nicklaus that a better seat was on hand, one directly off the back of the 18th green, from where he would extend his hand to congratulate the winner just after the final putt dropped.

"It just happened," Nicklaus said. "I just thought it was appropriate. So, I started doing TV earlier and started going down to the 18th green to greet the winner."

The handshake has been coveted ever since.

The man chasing Nicklaus' record number of major titles and Sam Snead's record number of PGA Tour titles received his first handshake in 1999, then another in 2000, another in 2001. With two more victories in 2009 and 2012, no one has clasped the right paw of the Golden Bear just off the 18 th green more than Woods.

"It's something that stays with you," Woods said. "I've gotten the chance to shake hands with Byron Nelson, Arnold Palmer and Jack Nicklaus after winning their tournaments. That's quite a trio. That's quite a special feeling."

TIGER: Plays better than his score indicates in Round 3 of the Memorial 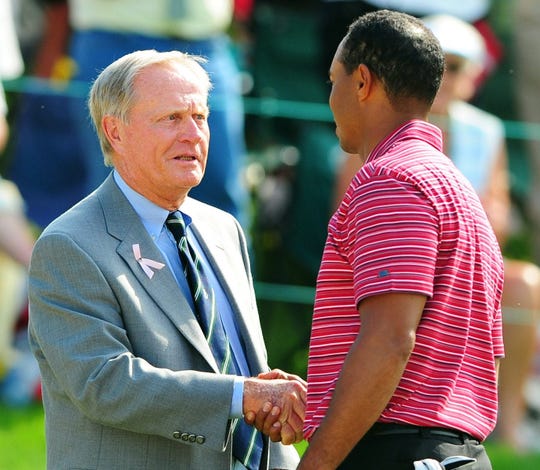 "There is no better feeling for a professional golfer than to walk off 18 at Jack's tournament and having him there to shake your hand," Els said. "It's hard to describe. It's such an emotional feeling. I remember when I shook his hand and it was a thrill to see him. And then it really hits you after the fact.

"As time moves on, the memory becomes even more special."

Paul Azinger's stunning hole-out for birdie from a deep greenside bunker on the 18 th hole provided the margin of victory in 1993. As unforgettable as the shot was, so, too, was the Nicklaus reward.

"One of my proudest moments of my playing career was walking towards Jack having just won his tournament," Azinger said. "I saw him waiting some 40 yards away and it was like slow motion. It was an emotional moment."

In 2011, Steve Stricker nearly blew his chance to shake Nicklaus' hand. After taking a four-shot lead to the back nine on Sunday, Stricker needed clutch par saves from bunkers on the 16 th and 17 th holes, from 15 and 7 feet, respectively, to win by one shot over Matt Kuchar.

"It wasn't pretty," Stricker told Nicklaus that day as the two shook hands.

"I idolized him as I grew up watching him win so many tournaments. I met him when I was playing at Illinois and Gary (Nicklaus' son) was playing at Ohio State. Then to play golf with him out on the Tour, to play with your idol, was something. Then you win his event. You put all that together and it's pretty special."

Or as David Lingmerth said, a dream come true. In 2015, Lingmerth got two handshakes from Nicklaus, the first coming after regulation play, the second coming after he defeated Justin Rose on the third playoff hole to win his lone PGA Tour title.

Nicklaus even Facetimed with Lingmerth's father, Thomas, who was celebrating his birthday.

"Having watched the tournament on TV so many times, then it was my first win, and then he treated my family so well and called my dad, it was overwhelming," Lingmerth said. "To shake Jack Nicklaus' hand, it was sort of surreal."

In 2017, Jason Dufner was in a daze after he polished off his 3-stroke win.

"It was weird, because you win, and you think of the time and effort you put into it," he said. "And then as you're sort of stumbling off the green, you see him, and you think to yourself that this is the greatest player to ever play the game. That this is his tournament, and you put all those things together and it's staggering.

"And one of the best things is you are a part of the history of this event forever. I have a picture of me and him shaking hands and it's in my office, so I'll have that forever and it's always nice to see."

Bryson DeChambeau let out a primal scream and pumped his two fists to the air after his 10-foot birdie putt on the second playoff hole won last year's Memorial. He then removed his tam o'shanter cap and shook the host's hand.