After a young girl was hurt by a line drive Wednesday night in Houston, leaving the batter who hit the ball into the stands — Albert Almora Jr. of the Chicago Cubs — on his knees in horror, a tiny corner of the social media world lit up.

Many of the 20 members of a private Facebook group, Fans Injured at M.L.B. and M.I.L.B, began to commiserate.

The comments had a familiar theme: Not again.

“The activity definitely kicks up,” said Dina Simpson, a member of the group. She was blinded in her right eye after being hit by a foul ball at a minor-league game in Eastlake, Ohio, in 2014. “It brings back the fight to make this right, and the questioning of why this is still going on.”

Members of the group have written letters to public officials and opinion pieces in newspapers, harangued baseball clubs, and worked with legislators to write measures that would require extending protective netting at major league and minor league ballparks.

There have been some victories, such as the announcement before last season that all 30 clubs would have protective netting at least to the far end of each dugout. But that was not enough to prevent moments like Wednesday’s incident and one last August, when a 79-year-old woman died after being hit by a foul ball at Dodger Stadium — a death the team did not acknowledge until February. Both spectators were hit by balls that went over or beyond the netting.

Perhaps the poignant images from Wednesday night — of a little girl, with an orange bow in her hair, crying as she was carried away, and of a distraught Almora being comforted by teammates and a security guard — will spur further change. (They were jarring enough to warrant a story in Marca, the Spanish soccer-centric sports newspaper that typically has little interest in baseball.) 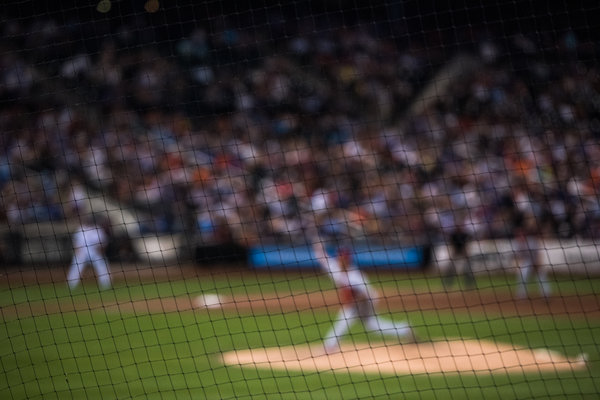 But those who have been calling for more protection, for nets to reach higher and run farther toward the outfield, say the public reaction follows a familiar pattern seen after horrifying events: immediate outrage followed by thoughts and prayers, and then no action.

“At some point, it’s all fallen on the victims to speak up,” said Geoffrey Jacobson, whose daughter suffered multiple facial fractures and bleeding on the brain when she was struck by a line drive at Yankee Stadium two years ago. “The players have at times spoken up that they agree, but you don’t hear the owners, you don’t hear the commissioner taking a stand and doing what’s right, and that’s what you need.”

M.L.B. has long been protected from litigation by a disclaimer on every ticket that says the spectator assumes all risks of attending a game.

In a brief statement on Thursday, M.L.B. called the incident in Houston upsetting, offered its best wishes to the girl and her family and noted that clubs had made ballparks safer by extending netting, before adding: “With last night’s event in mind, we will continue our efforts on this important issue.”

Some teams, including the Yankees, have resisted extending protective netting because some fans, often season ticket-holders in expensive seats, have objected. But after Jacobson’s daughter was hurt, the team extended the netting far down its baselines, as the Mets had done in 2017.

As Jacobson noted, players have often advocated more protective measures for fans in the aftermath of high-profile injuries. After Wednesday’s game, Kris Bryant of the Cubs said in a television interview on ESPN that there should “absolutely” be some sort of protection around the entire field for fans.

“Any safety measure we can take to make sure that fans are safe, we should do it,” he said.

The players experience the game in a way that makes them intuitively aware of increased hazards from batted balls. Not only are players throwing and swinging harder, but there were nearly 14,000 more foul balls hit in 2018 than there were 1998, when baseball expanded to 30 teams, according to the website FiveThirtyEight.

It is why so many players ensure that their own children sit behind netting at games.

Or in the case of David Price, the Boston Red Sox pitcher, his wife and 2-year-old son do not watch from the stands at all. They watch from a suite.

“It stinks that we have to have this conversation,” Price said Thursday in the visiting clubhouse at Yankee Stadium. “We knew that something like this would have to happen — probably with a small child — for action to be taken. It takes something extreme to have something happen. I couldn’t imagine that being my son.”

D.J. LeMahieu, a veteran infielder in his first season with the Yankees, said every player who has ever stepped into a batter’s box could put himself in Almora’s shoes.

“It’s like the worst part of baseball,” LeMahieu said. “Even in the field, when someone else does it, you kind of cringe. You almost flinch out there, hoping someone doesn’t get hit. It’s scary. You hate that.”

As unequivocal as players have been in calling for more protection for fans, the news cycle inevitably moves on. From time to time, the players union has broached the subject with M.L.B., but there are other priorities when it comes to collective bargaining.

Yankees reliever Zack Britton, a longtime union representative, was asked if the players could collectively push for more protection.

“Yes and no,” he said. “Teams don’t want the players — they own the fields, it’s their business and they normally aren’t too keen on the players telling them what to do.”

Jacobson said he understood that it could be uncomfortable speaking up against employers, but noted that the players have a voice that others lack.

“They have a platform, they have a lot of clout,” he said. “Just the families speaking out, it’s not enough. Some people are listening, but it’s falling on deaf ears, for the most part. I can shout from the mountaintop, but the players are a lot more noteworthy and have a lot more pull than me.”