Why do so many young women hate feminist trailblazers like me? asks JULIE BINDEL

For anyone uninitiated into the various waves of 21st-century feminism, this will no doubt come as a shock. But in my opinion, what passes right now for modern feminism is doing women more harm than good.

Many young women today are not only pandering to men in their so-called feminism, but seem utterly unconcerned that the hard-won rights achieved by older women in the 1960s, 1970s and 1980s are at risk of being catastrophically eroded.

They are helping everyone but themselves. In many ways they are betraying everything I and my brave colleagues fought for. This is the worst clash across the generations I have witnessed since coming to feminism in 1979, aged 17.

In universities around the UK and beyond, women are being fed a type of faux feminism, often by men reluctant to lose any of their privilege. 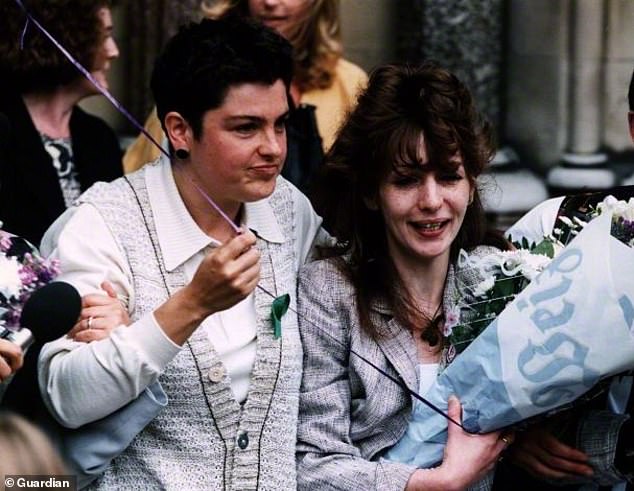 Julie Bindel, who came to feminism in 1979, says the rights achieved in the 19060s, 1970s and 1980s are at risk of being catastrophically eroded. Pictured: Julie (left) with Emma Humphreys in 1995 after a campaign to free her from jail for killing her violent partner

These women are being bullied and cajoled into accepting nonsensical concepts that are, at best, naive and, at worst, downright dangerous.

Prostitution, say these young women, is a job just like any other. They also argue that pornography is liberating. And finally, that trans-women should share female-only spaces such as hospital wards and domestic violence refuges.

This last makes me want to weep. It was women of my generation — often called second-wave feminists — who, 40 years ago, built rape crisis centres and refuges with no funding or salaries. To see them being dismantled by the very women who may one day need them is heartbreaking and infuriating.

I don’t think these women — almost all of whom would call themselves feminists — realise they are complicit in eroding our rights, for the simple reason they are no longer taught feminist history in universities. Instead, they are fed a sop of incomprehensible post-modern claptrap by ivory tower academics.

Feminists of my generation are not just ignored, but actively disparaged — or worse.

Since January 2004, when I offered an early opinion on the trans issue for a national newspaper, whenever it becomes public that I am about to speak at an event, always about an aspect of male violence and always as part of my campaigning work, a mob forms with the aim of bullying the organisers into un-inviting me. This is always played out in public and it is always humiliating. Sometimes the organisers capitulate.

I have been invited then uninvited from numerous events at universities following protests from trans activists and supporters of ‘sex work is work’ politics. I have also been invited to, then de-platformed from a number of events exploring free speech.

By contrast, genuine achievements of the past go unrecognised. From the very beginning of my involvement in the women’s liberation movement, we were out on the streets, waving placards, carrying banners and shouting through loudhailers, protesting the laws we wanted to change. 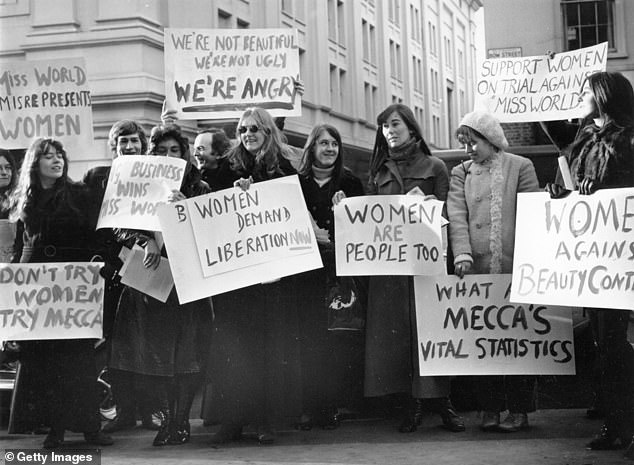 Julie said feminism has been rebranded and repackaged as ‘just be kind and nice to everyone’. Pictured: A 1970 women’s liberation protest

It was our campaigning that led to the introduction of the offence of coercive control; that barred the use of a woman’s previous sexual history in rape trials and ensured anonymity for the victims of sexual assault; and outlawed rape in marriage, which — young feminists are often astonished to discover — was perfectly legal in England and Wales until 1992.

Absurdly, there is no longer any expectation that being a feminist requires you to do anything feminist at all. Instead, and ironically given my experience, feminism has been rebranded and repackaged as ‘just be kind and nice to everyone’. Young women are told it is simply about the ‘choice’ to be who you ‘want to be’.

But if feminism is about choice, what does this mean for the women and girls who don’t have any? The girls forced into marriage, the women pimped out by violent boyfriends, the women on benefits living in temporary accommodation with young children they can’t afford to feed?

For feminism to mean anything, it has to be for all women and not just the privileged few.

You might ask, as many young women do, what is there still left to fight for? Although my generation of feminists and those that came before chalked up numerous victories, women are far from liberated. Levels of male violence towards women and girls are off the scale, as we have seen with the tragic events of recent weeks.

Convtiction rates are so low that rape has been more or less decriminalised. Sexual harassment is endemic in our secondary schools and still a problem for many women in the workplace.

Many young women claim to be feminists, but seem to spend their time dismissing those of us who do the work — as opposed to simply talk the talk — as ‘irrelevant’, ‘bigoted’, and ‘past it’. Do these women even know about the battles we’ve fought and won to afford them some freedom? 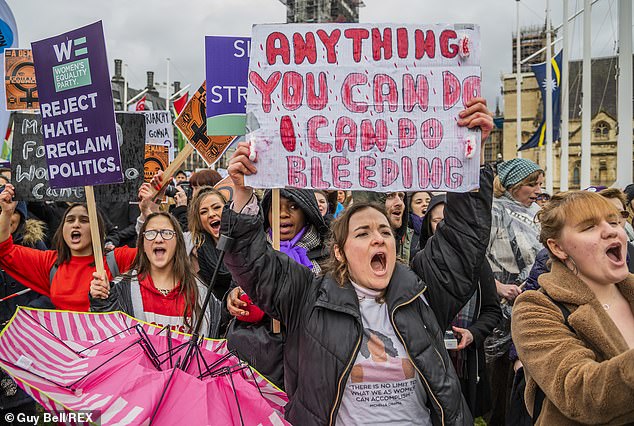 Julie said in the current climate of misogyny, many young women are turning on feminists like her rather than pointing the finger at abusive men. Pictured: A rally to celebrate International Women’s Day in 2020

In 2018, for example, Ash Sarkar, a media commentator, tweeted about the proposed changes to the Gender Recognition Act, claiming the introduction of ‘self-identification’ would not have any effect on the rights of others. I replied: ‘Unless you are a female in prison, one of the most disenfranchised groups on the planet of course.’ It was a reference to the case of Karen White, the transgender sex offender placed in a female prison who went on to sexually assault two female inmates.

When, in reply, Sarkar claimed ‘bigots’ like me didn’t ‘care about women in prison’, it was too much. Had she known her feminist history, she would have been aware that I am the founder of Justice for Women — a campaign I began in 1990 — and have helped countless abused women get out of prison.

When I came to feminism, there were no laws protecting lesbians from discrimination and abuse; violent men often won custody of children when women left a marriage; and domestic violence was treated by police as a ‘private matter’. All of this changed because of active feminists, as opposed to those who sit on social media virtue-signalling.

In fact, a woman reporting rape five years ago had a much better chance of seeing justice done than she does today. There were 1,917 fewer rapists convicted in the year to December 2020 than in 2016-17, a decline of 64 per cent.

In the current climate of misogyny, many young women are turning on feminists like me rather than pointing the finger at abusive men. Yet there are young feminists doing invaluable work to challenge male violence and bring about women’s liberation. 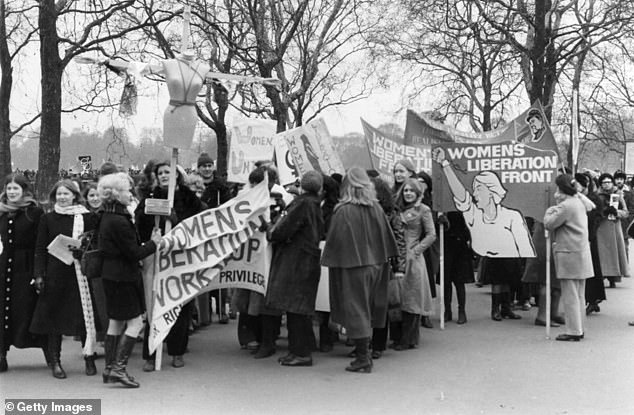 Julie said social media activism isn’t the answer, as the #MeToo movement is no substitute for action. Pictured: A women’s liberation protest in 1971

The campaigning group We Can’t Consent to This, which successfully abolished the ‘rough sex’ defence so often used by men who kill women, continues the work I was involved in as a young feminist when we, too, abolished the insidious defence of ‘provocation’, used by a number of men who’d killed their wives because of ‘nagging’ or alleged infidelity.

Of the 1,000-plus women attending the 50th anniversary of the Women’s Liberation Movement conference in London, in February 2020, a minority, but significant number, were in their 20s.

And when I launched my new book last month in London, well over 100 of the 250 books I signed were for women under the age of 30, with some in their teens.

Right now, we need feminism more than ever, but not the kind that puts men first. In the real world prostitution is not a liberating career ‘choice’, and increasingly violent pornography is not ‘sex-positive’.

Neither is social media activism the answer. The #MeToo movement is no substitute for action. Let’s point the finger at men who rape rather than expecting yet more women to lay bare their horrific experiences.

We live in a world in which rape, femicide and everyday abuse and harassment are ever present.

To change it, we need to be united and not divided by generational conflict. Somehow, and urgently, we must find a way to bridge the gap. Fighting among ourselves wastes time — and there is no time to lose.

Feminism for Women: The Real Route to Liberation, by Julie Bindel, (£16.99, Little Brown) is out now.